Joshua Halstead represents the third generation of Halsteads to work in the plumbing industry serving Northeast Ohio, and it’s something he takes great pride in.

Josh’s dad Russell began in the family business in 1980, working for his father Robert Halstead, who owned the Roto-Rooter franchise serving Lorain County in Northeast Ohio. After working for his dad, Russell Halstead started his own plumbing service company in 1997. He named the company The Personal Plumber, intentionally not including rooter in the name to avoid any confusion with his dad’s business. In 2004, with a focus on service and emergency work, Russell began Valu-Rooter with a cousin. After a few years, he bought his cousin out and merged The Personal Plumber and Valu-Rooter businesses.

According to Josh Halstead, his dad kept a bit of the old company, as each of the Valu-Rooter service vehicles carry the tagline The Personal Plumber. Today, Valu-Rooter is headquartered in Elyria, Ohio, and serves much of Northeast Ohio — from as far west as Sandusky, east to Lake County and as far south as Medina County. 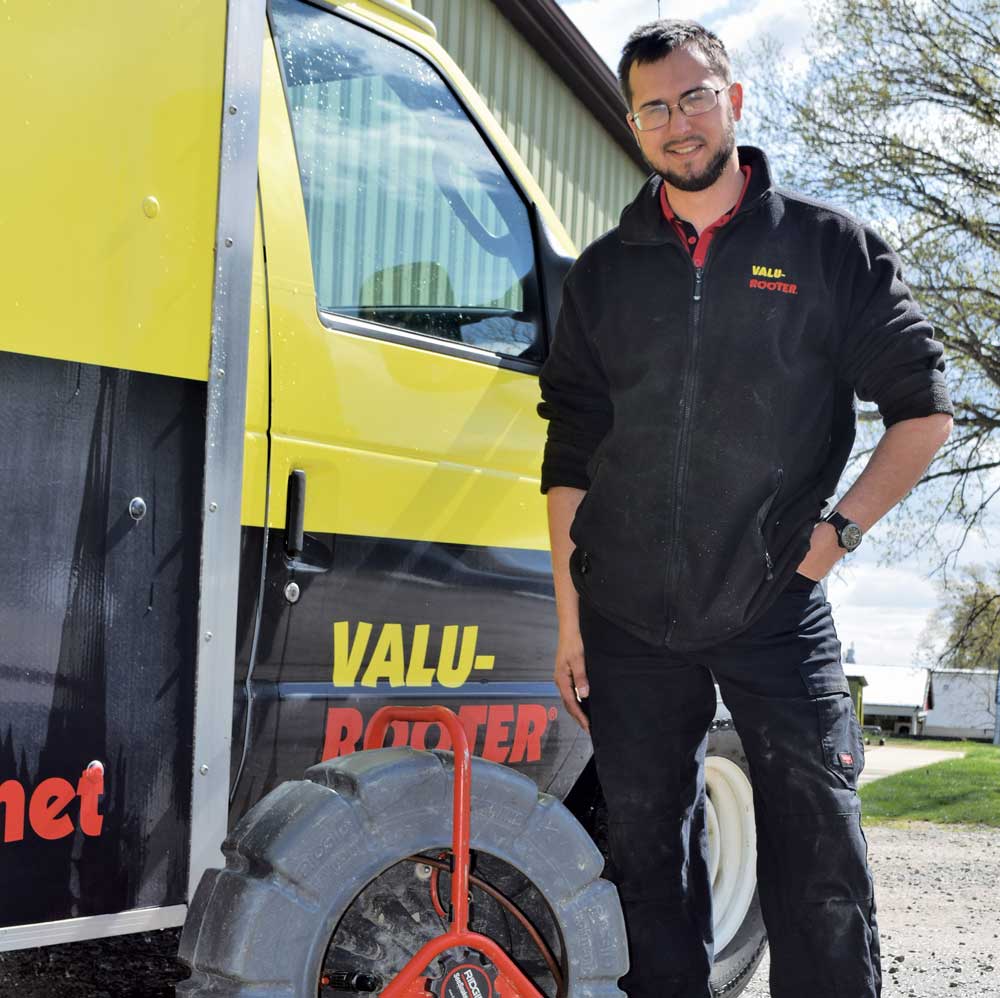 “My journey into the business began a decade ago,” Josh says. “My dad encouraged me to pursue other opportunities, but I ended up here. I started when I was 15 as a summer job. When I graduated high school, I decided to stay in the family business.”

Initially, while still in high school, his duties fell under the category of grunt labor, Josh notes. Often helping the Valu-Rooter team install sewer and water lines and haul tools. Occasionally, he’d help unclog a drain or inspect a line. Most of his training comes from on-the-job experience, and when it came time to get his plumber’s license, Halstead worked with an instructor to learn and understand the plumbing codes.

While he still gets out in the field, today much of his duties are more focused on the operations of Valu-Rooter, making sure the techs have the equipment they need and that it is running properly, completing estimates and occasionally helping in the field as needed.

“Since the day that I started, I’ve had the drive to get better each day at what I do,” he says, adding that it has a lot to do with advice he received from his dad early on.

“One thing my dad really drilled into me is that when I am at work, that is work time. Not that you shouldn’t have laughs at work, but it’s just the importance of focusing on the work and trying to complete the task, whatever that be,” Halstead says. “It could be installing a sewer or getting a drain opened, no matter what, you’re here to work. Be laser-focused on that. That advice has helped me excel in this industry, gain more knowledge and improve my skills. It’s a drive to get better every day and it helps build our good reputation.”

In the plumbing, sewer and drain cleaning industry having a good reputation is key, especially when working on infrastructure that is, by-and-large, out of sight and out of mind.

“No matter what, word of mouth is the best advertising you can get,” Halstead says. “Happy customers refer people to us.” 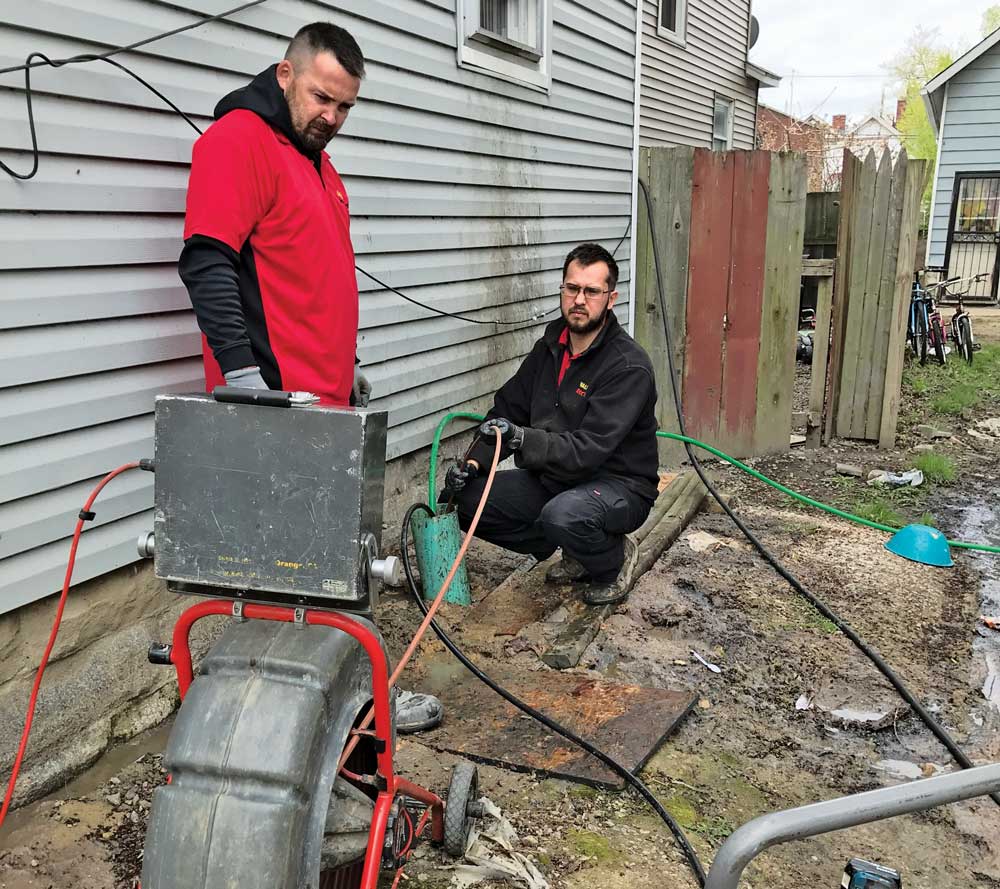 Valu-Rooter’s offerings include residential, commercial and light industrial sewer and drain cleaning, service plumbing, sewer and water line replacement work. About the only area the company does not handle is new construction work.

When it comes to equipment used on a daily basis, the Valu-Rooter service vans all carry RIDGID inspection cameras and cable machines, with cables from Duracable and Draincables Direct (DCD).

“We do a lot of drain line inspecting as part of our day-to-day operations. We don’t have a lot of people call specifically for inspections but drain cleaning, leads perfectly right into it,” Halstead says. “You need to show them what is going on down the drain, and that is part of completely servicing the customer. Just running a snake or a jet through the drain and getting it open is not doing a thorough job or a good job.”

According to Halstead, anyone who has ever stuck a snake in a drain can tell if there is an obstruction. There is a big difference between telling a customer you can feel something is wrong and showing them the problem.

“Seeing is believing when working in drains,” he says. “When you can show customers that more work needs to be done, for instance the reason the clog requires a jet vs. a cable. Or maybe that the line needs to be replaced. Using the camera, you can show them why and that helps them to understand. They also see that you are honest and that helps your reputation.”

In addition to the cameras and the cable machines, the company has three Harben trailer-mounted jetters, a smaller Cam Spray jetter cart and Kubota mini-excavators for work that requires digging. The most recent drain clearing equipment addition is the RIDGID FlexShaft machine.

“It’s pretty cool to see what those FlexShaft machines can do to cast iron. When you have a pipe filled with buildup and you can take it back to its original diameter, in seconds sometimes, it’s amazing,” Halstead says. Personally, Halstead estimates he cleans and inspects 10,000 to 12,000 ft of drains a year, and on average the company inspects and cleans 175,000 ft a year.

“The No. 1 issue as to why someone’s drain backs up is a tie between tree roots and baby wipes. People are surprised when we pull those [wipes] out. They tell us that the package says ‘flushable’ and we always have to tell them that it is flushable, it will make it through the toilet, the problem is, it won’t break down in your sewer line,” Halstead says. “It takes years for that to break down, unlike toilet paper, where the moment it hits the water, it starts disintegrating. It’s a surprise to people, and honestly, most of the time, they don’t listen to us. It’s their sewer, it’s their choice and we’ll keep coming back as needed.” 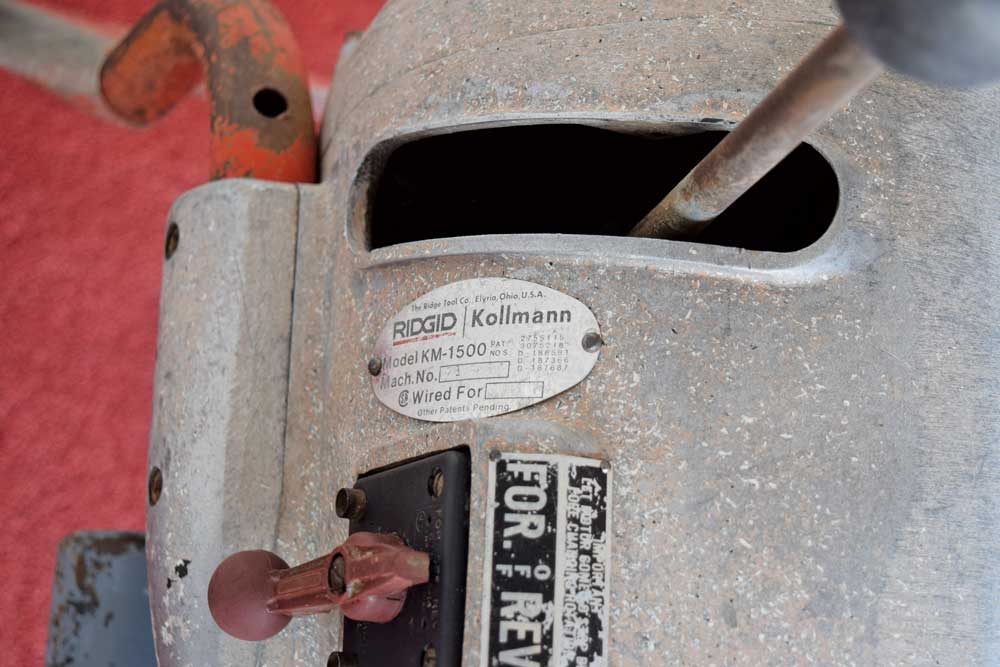 While calls to clear drains are good for business, Halstead laments the fact that people keep flushing wipes. Noting that people don’t realize they are paying twice – once on the personal side and then again on the public side of the system. “They don’t realize the damage it does to sewer systems, and that people’s tax dollars are going to clean pump stations and repair the pumps,” he says.

If the line needs more than a cleaning, or the customer is experiencing a water leak, Valu-Rooter can handle sewer and water line replacement. Right now, it’s strictly open-cut work, but Halstead is looking at offering trenchless rehab solutions.

“I’m watching where the industry is headed and it’s definitely in that direction,” he says. “The newest technology isn’t always the best way to go on a job, but employing the newest technologies gives you more options to help the customer.”

As an example, even though the RIDGID Propress has been available for several years, many have not adopted its usage. Halstead looked at the equipment and saw the benefit of adding it to his truck. “Instead of having to shut the water off and drain off a whole system for a couple of hours, I can just hurry up and press the new fitting and the customer is back up and running in an hour,” he says.

Using new technologies isn’t something that is foreign to Valu-Rooter, one of the first pieces of equipment Russell Halstead purchased was an inspection camera. The company still has that black-and-white relic in its warehouse, and Josh Halstead says it still works.

To keep the company equipped with the right tools, Valu-Rooter works closely with its distributors, especially on the RIDGID side of the business. “We buy a lot of our RIDGID equipment from Welker-McKee in Independence, Ohio, and that relationship is extremely important to us,” Halstead says. “They help us out so much and keep us running. My rep Quintin Patrick, whatever he can do for us, he does.”

Beyond providing Valu-Rooter with quality equipment, distributors often serve as a conduit for service on the equipment, though Halstead says the company tries to repair what it can in-house.

“Knowing how to repair equipment saves us money and it saves us downtime,” he says. ”Working with RIDGID [also headquartered in Elyria, Ohio] is a bonus. RIDGID is local and I can take equipment to them. Any time we go to a tradeshow, people ask us where we are from, when we tell them we’re in Elyria, they know they are going up a steep hill to get us to switch.” 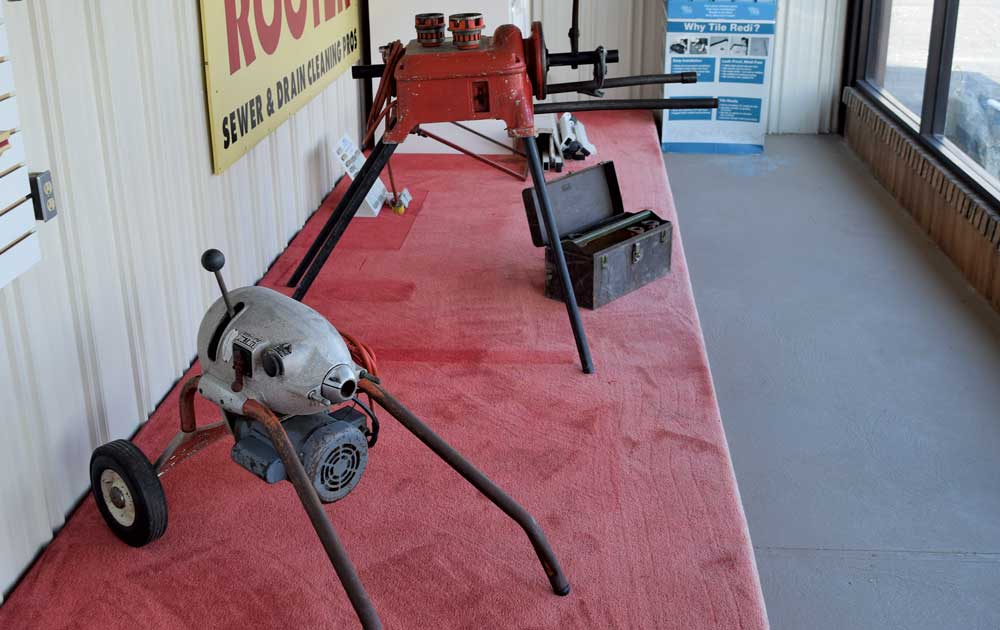 Being a younger generation plumber, Halstead knows the value of social media to help himself and the company grow, though it might be surprising to hear that he is less interested in social media to promote Valu-Rooter.

“I don’t see reaching customers on social media as that big of importance. It’s good to have a slight presence, but I think Google searches are more important,” he says. “When someone needs a service plumber, they need it immediately, so they won’t go to Facebook, instead, they’ll search for, ‘plumber near me’ or ‘emergency plumber.’ For those searches, Google is more important for the company in my opinion.”

As someone who is active on Instagram — @thepersonalplumber — the account serves two purposes. One is to connect to others in the industry and the other is to promote the industry at-large.

“My hope when I started my Instagram account was that maybe some people my age or even younger would see it, and it would have a ‘wow factor,’ and they would realize what plumbers do and pique their interest in this work,” he says. “It’s also to reach out to others in the industry and learning from them. I can’t tell you how many times I’ve learned new tricks from others.”

The former, he acknowledges, is the greatest threat to the industry. The workforce is aging, and no one is there to learn from the old guard and eventually their place.

“As a company, we’ve reached out to local trade schools and nobody has a specific plumbing course. They either lump it into the HVAC or electrical. I know a lot of plumbers go into HVAC as a business, but there is no specific plumbing course,” he says, “I don’t think there are enough people encouraging kids, even if they are looking at the trades, to become a plumber. They think that you are just dealing with sewage and you’ll be covered in it, that’s not the case. There are days where you get splashed with sewer water, but mostly it’s just dust and dirt and you can brush that off and go home.”

Looking at the last year, dealing with the COVID-19 pandemic, showed anything, it’s the importance of having a reliable source of clean, running water and a clear drain for it to go down. At the onset of the pandemic, things did slow down for Valu-Rooter, but that quickly changed. 2020 was the best year the company has had since its formation and 2021 is not slowing down.