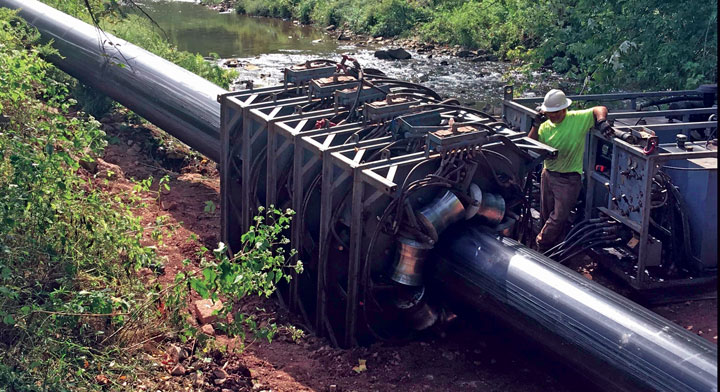 Between 2012 and 2014, Tredyffrin Township, Pennsylvania faced three catastrophic failures of the Wilson Road Force Main (WRFM), a 30-in. PCCP sanitary sewer force main. The WRFM is part of the Valley Creek Trunk Sewer (VCTS) owned by the Tredyffrin Township Municipal Authority (TTMA), a group of five municipalities that discharge into the VCTS system. Much of the main is located within the Valley Forge National Historical Park.

The first failure in March 2012 resulted in a wastewater spill to Valley Creek, a trout stream. Second and third failures occurred just 42 days apart in spring 2014, both affecting the same major intersection near Washington’s Headquarters. Given the physical location, complex regulatory and social environment as well as major constructability constraints, it was determined the ideal approach would be a rehabilitation solution utilizing the existing force main.

The method chosen was the thermoplastic close-fit lining Tite Liner system from United Pipeline Systems, an Aegion company. A high-density polyethylene lining system that can provide a fully structural solution when pulled into place inside the existing pipeline. Modeling showed that the Tite Liner system would increase capacity of the line due to its improved Manning’s n-value. United’s installation method helped minimize disruption within the park’s limited jobsite footprint, while also offering low material costs and long installation sections. The longest pull topped 1,500 ft, with pulls averaging 600 ft. The lining portion of the project was completed over 3 months in 31 separate installations – on time and on budget – with zero safety incidents or wetlands impact. Not only was the existing pipeline successfully rehabilitated to prevent future wastewater spills, but it also expanded system capacity from 20 to 28 MGD.

Examples of the project’s teamwork include site work/erosion control by PACT ONE, eight miles of difficult bypass constructed by Sunbelt Rentals and specialty subcontracting by United Pipeline Systems, not to mention support by PA DEP and other environmental agencies during the permitting processes. The Township Engineer provided much needed coordination with regulatory agencies. Permits that would typically take months to obtain were pushed through in a matter of weeks. While a project of this size and scope would normally take years of permitting and planning, construction was successfully completed in less than one year. This project was a successful application of static pipe bursting technology that was used in 2017 to replace an undersized gravity sanitary sewer in the City of Maple Ridge, British Columbia, Canada. A major upsize was required (from 15 to 34 in.). Seven critical sections (a total of 2,456 ft) of 15-in. diameter PVC sanitary sewer were operating at capacity. With many developments occurring upstream of those sections, the City of Maple Ridge had an immediate need to upsize those sections.

The sanitary sewer runs through an environmentally sensitive area (the shore of Kanaka Creek, Metro Vancouver’s Kanaka Creek Park, and a green belt) and the area has high water table. Open-cut replacement was not feasible, therefore pipe bursting technology was chosen. The replacement was split into seven sections/pulls, averaging 350 ft each.

The existing manholes had to be replaced with larger manholes and, as typical, the entry/exit pits were excavated at the manhole locations. The equipment used to pull in the new 34- and 28-in. HDPE DR17 pipes was a Groundoburst 2500G Static Pipe Bursting Rig. Maintaining the grade of the pipe was critical. With such a major upsizing ground heaving was a concern. The flow was maintained during construction through a temporary 8-in. bypass line.

The project was completed successfully with no disturbance to utilities and ground surface. The grade of the existing pipe was minimal: 0.01 percent to maximum 0.32 percent and maintaining that grade was critical. The alignment of the pipe was through an environmentally sensitive area: the shore of Kanaka Creek, Metro Vancouver’s Kanaka Creek Park, and a green belt.