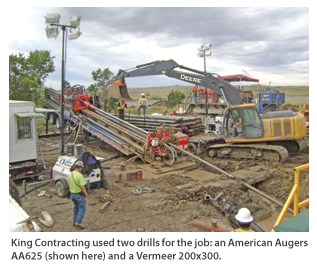 A massive $15 million raw water delivery system construction project is under way near the City of Wakpala, S.D., and one early portion of it necessitated the use of horizontal directional drilling (HDD) to install a 24-in. fusible PVC pipeline under the Grand River.

King Contracting, Lincoln, Neb., recently completed the 4,800-ft bore under the water body, which is a dammed-up tributary of the Missouri River, part of the Oahe Reservoir. According to King Contracting owner Jeremy King, the installation of the 24-in. line represents the longest bore ever done using 24-in. fusible PVC pipe.

King Contracting was established in 1999 and specializes in HDD, handling installation for any type of pipeline (water, sewer, gas or oil). “Our niche in the HDD market has been to go after the more challenging projects and this project was by far the most challenging project we have done,” King said.

According to project engineer Jerry Shae, Bartlett and West, the $1.3 million, 4,800-ft bore is just short of one mile of the entire 80-mile raw water delivery project that is now under way that, when completed, will serve the Standing Rock Sioux Tribe reservation, servicing 15,000 to 20,000 customers. The Standing Rock reservation encompasses two counties: one in North Dakota and one in South Dakota.

“This HDD contract is just one portion of the project, part of the raw water line, which is the line from the Caisson-style intake on the Lake Oahe reservoir to the water treatment plant. The raw water line runs between the intake and the treatment plant,” Shae explained, noting that this project will take nearly four years to complete, with this 4,800-ft bore being in the initial stages of the project.

This project presented King Contracting with several challenges, even before drilling got under way. One of these challenges was the remoteness of the drilling site. “We had to account for the fact that this is a very remote area,” King said. “It’s an Indian reservation so there wasn’t going to be much as far as support [i.e. availability of supplies] in the area. It’s basically in the middle of nowhere. So we had to bring extra parts and equipment to be ready for any potential problems.”

But a more complicated challenge was the lake itself and the effect that a rainy spring had on it. Using a wireline system from Centerline Directional Guidance Systems, surveyors were put to the test. “We had a lot of rain this spring and so the water in the lake rose about 20 ft, which made the water level about 60 ft deep,” King explained. “The challenge with that is our locating system; we couldn’t put enough coil wire in the water because the lake was so deep. There were also issues with the current and winds up there that blew so hard that we had a hard time getting surveying off the bottom of the lake with the divers.” 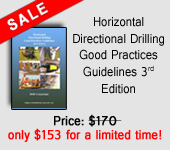 Divers were hired to lay the entry and exit coil in the lake from barges but the water’s extra depth posed problems. “We could only lay it out so far before the water got too deep,” King said. “We couldn’t get the coil on the bottom of the lake. In order for them to drill out that far and to be within 5 ft of their line when you are essentially drilling blind, for that distance is pretty impressive.”

Using a Vermeer 200×300 drill rig, King Contracting drilled a 9 7/8-in. pilot hole, which took approximately 10 days. The crew used the Vermeer rig for the first back ream, enlarging the hole to 24 in. For the second 38-in. ream pass, an American Augers AA625 was rented from Delta Directional, Newton, Miss.

The backreaming also presented a challenge to the crews, due to the ground conditions. “Ground conditions were from clay to shale to silty sand. But the challenge was that the shale was almost too soft for the hole openers and would stick to them,” King said. “We had to use a homemade reamer and it struggled to get through the harder shale.”

Because of the ground conditions, it took three weeks longer to complete the reaming process, King said.

Underground Solutions Inc. (UGSI) provided the 24-in. DR18 Fusible C-905 pipe (F-PVC), as well as fusion services to assemble the pipe onsite. While the crews were handling the drilling, UGSI fused the pipe to the required length. King Contracting had the choice of product pipe selection for the job and ultimately went with F-PVC over others. King said other pipe options would have required a larger diameter pipe size, which would have contributed to the bore size, cost and equipment costs. Wall thickness and pressure also played a part in the decision to go with F-PVC pipe. King said he had some experience in using F-PVC pipe on other HDD projects and was satisfied with UGSI’s guarantee of the product.

“F-PVC pipe fit the need nicely for this project because it has a relatively narrow wall thickness yet it can be pressure-classed relatively highly,” said Shae, also noting the cost-savings when compared to other pipe options.

UGSI senior product engineer Richard (Bo) Botteicher said the total 4,800 ft of pipe required for the installation was fused from 120 pieces of nominal 40-ft long pipe lengths. “The fusion went well. We had some issues in the very beginning with layout of the pipe,” Botteicher said. “You want to try to lay out the entire length at one time if you can and when you start getting into the total lengths that we were dealing with, it can be difficult to find that layout room.”

The terrain at the project site was filled with hills and curves. The fused pipe was placed on rollers and snaked along area driveways and roadways; in some instances, crews constructed corrugated culverts to get the pipe under driveways.

“We typically pull a lot of steel pipe so we treated the F-PVC pipe the same as we treated steel pipe as far as the bend radius goes and we gave it more care coming off the rollers as it’s more fragile than steel but it still has good strength,” King said.

Pullback of the pipe took about 14 hours. There was one minor hiccup in which one of the pipe joints was contaminated and needed to be replaced before it was pulled in, but other than that the pullback went smoothly, Botteicher said.

The use of F-PVC pipe in directional drilling projects is becoming increasingly common as more HDD contractors use it and believe in its capabilities. “HDD has historically been and continues to be the most used installation technique for F-PVC pipe,” Botteicher said. “The pipe is well suited for HDD applications because the tensile capacity of the plastic lends itself to longer pulls and larger diameter installations… It’s all about bringing people up to speed about their options regarding pipe materials suited for HDD use.”

Botteicher said that F-PVC pipe use in HDD projects is an educational process. “HDD continues to gain traction in the market, particularly on the water and wastewater side, which is where UGSI is focused. We’ve had well over 2,000 installations by HDD, and we’re over 2 million ft now for all types of installations.”