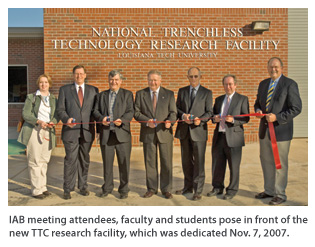 The year is 1989, you have just returned from your lunch break during which you caught up on news reports on the latest developments in Eastern Europe (was the Berlin Wall really going to be opened?). You return to your desk and, while glancing over the curled faxes awaiting you (isn’t this new technology great!?), you see a slick-haired stranger approaching, briefcase in hand.

Your sewer department had been faced with a host of issues — backups, overflows, broken pipes, sinkholes — and this salesman says he has the answer to your problems (so this resin-saturated felt can seal my pipes while not digging up the streets?). It seems almost too good to be true. You need more information. But where can you find it?

It was in this environment in which the Trenchless Technology Center (TTC) was founded at Louisiana Tech University in Ruston, La. At the time, technologies like directional drilling, microtunneling and cured-in-place pipe were making inroads, but little was known about these methods. That’s where TTC came in. And while TTC served as a clearinghouse of information for utilities, it also served as a seedbed for new product development and a medium by which industry and academia could share knowledge. Today, the Trenchless Technology Center carries on this tradition and remains one of the premier research centers focused on underground utilities worldwide.

As TTC begins its third decade, it will do so under new leadership. Upon the retirement of its director, Dr. Ray Sterling, the reins have passed to Dr. Rob McKim, who will serve as administrative director, and Dr. Erez Allouche, who will serve as research director. Both men have long histories in the trenchless technology industry, as well as with TTC. Allouche is an associate professor of civil engineering at Louisiana Tech and has been with TTC since 2003. McKim returns to Ruston following stints in industry and academia. McKim worked at TTC for three years from 1998-2001.

As the trenchless market has matured since the founding of the Trenchless Technology Center (which was originally called the Trenchless Excavation Center), the role of the center has evolved to keep pace. “The pioneers of trenchless technology brought a vision, ingenuity and tremendous talents in the fields of mechanical and hydraulic systems, and TTC’s role was to spread the gospel and assist in the acceptance and incorporation of these technologies into the marketplace,” Allouche said. “As the market has grown, TTC’s role has shifted to assist in the development of new technologies, materials and concepts that will assist companies and utilities in improving the services they provide in terms of enhanced quality, lower costs and reduced impacts.”

One of the hallmarks of the Trenchless Technology Center has been a collaborative environment between industry and academia — an environment that still exists today. That collaborative spirit is not surprising considering the Center’s founder, Dr. Tom Iseley. Iseley grew up in the pipe laying business and worked as a contractor before pursuing higher education and a teaching career.

While completing his doctoral studies in the field of trenchless technology, Iseley recognized a void in research. “We really lacked in some areas of trenchless technologies, particularly in microtunneling and rehabilitation techniques,” said Iseley. “I felt what the industry needed was a mechanism to help facilitate R&D.”

One project in the early days made a profound impact on the emerging field of trenchless — the Construction Productivity Advancement Research (CPAR) program — conducted jointly by TTC and the U.S. Army Corps of Engineers’ Waterways Experiment Station in Vicksburg, Miss. CPAR was one of the largest trenchless research projects ever conducted and included full-scale field research experiments on seven pipeline rehabilitation systems from five manufacturers; three microtunneling systems under controlled ground conditions with extensive instrumentation and monitoring; and small directional drilling systems. The findings of the research led to the development of the “The Guidelines for Trenchless Technology: CIPP and FFP Rehabilitation Systems, Mini-HDD, and Microtunneling.”

“The CPAR studies were very important in establishing some engineering information to go along with the use of directional drilling, microtunneling and liner design in North America,” said Sterling, who took over as director in 1995.

When TTC was established, it did so with an Industry Advisory Board (IAB), which provided guidance and financial support. In some cases, TTC provided the ideal research and development medium for these growing companies. “At that time, some of the smaller companies that were involved in the industry didn’t have the wherewithal to perform the research themselves, so TTC filled that role,” Sterling added.

The research and students who have been associated with TTC have had lasting impacts on the trenchless marketplace. Many Tech grads have entered the market as consulting engineers and contractors, or entered academia to introduce trenchless to the next generation of engineers. Additionally, TTC served as the model for the Centre for the Advancement of Trenchless Technologies at the University of Waterloo in Canada, founded by McKim.

The research conducted at TTC has evolved along with the market. A quick look at some of the projects may make one wonder whether they have anything to do with trenchless — ultra-wideband radar, geopolymers, nuclear magnetic resonance.

“The mix of research that has evolved since Erez Allouche has joined the center has shown the capabilities and the desirability of having a center like this,” Sterling said. “We are doing advanced research in a number of areas that are not strictly trenchless, but they are being applied to the installation, inspection and rehabilitation of utilities.”

Allouche concurred. “We have had more of a focus on fundamental scientific work and the development of new technologies,” he said. “We have also expanded the traditional soil-structure interaction and linear research areas to include software development, development of electromagnetic and acoustic sensor technologies and material sciences including polyurea, polyurethane and geopolymer.” 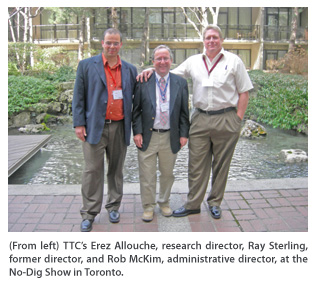 Many of these areas of research are in line with the projected needs of the industry, which include improved inspection and assessment technologies and asset management.

“The location and characterization of buried utilities is going to remain an important area that is nowhere near developed yet,” Sterling said. “We need more than just a visual look at the pipe. We need to figure out what the material properties are and where the voids are outside the pipe. By getting this type of information we can better predict how long a certain type of pipe or rehabilitation can be expected to last.”

McKim envisions TTC continuing to play a role beyond research. “New technologies have been slow to catch on in North America, but by researching and testing new products before they are introduced in the field you can reduce the risk,” he said. “In the past, TTC has done testing and pilot projects and refined products before they entered the market, and that helped to facilitate their success and growth. In my mind that’s one of TTC’s key accomplishments”

Additionally, TTC’s dialogue with industry has been important in disseminating information, as well as keeping a finger on the pulse of needs of the market. One way that TTC maintains the dialogue is through the Municipal Forum series, which consists of regional meetings that bring together city leaders and industry for a day of discussion on all relevant topics.

With the increased acceptance of trenchless technologies and the needs associated with building and repairing underground infrastructure, the Trenchless Technology Center will no doubt play a major role for the next 20 years and beyond.