The City of Toronto and Toronto Water are no strangers to trenchless works and are heralded for its proactive management of its underground infrastructure. One project nearing completion is the rehabilitation of the Wilket Creek Sanitary Trunk Sewer and the North York Storm Trunk Sewer.

Toronto Water’s Water Infrastructure Management section is responsible for the long-term management of the City’s water, wastewater and stormwater assets to optimize infrastructure investment, level of service and performance. Toronto Water has an ongoing inspection and condition assessment program to inspect approximately 500 km of sewers every year of its nearly 11,000 km of sewer network. Based on the condition of sewers and maintenance holes – determined by CCTV footage, sonar imagery, laser profiling and visual inspections – Toronto Water has developed a long-term sewer renewal program. These two sections of sewers were identified for rehabilitation around 2015.

This $23.25 million project to rehabilitate approximately 2,280 m of trunk sewers highlights the benefits of several trenchless methods – cured-in-place pipe (CIPP) lining, glass reinforced plastic (GRP) sliplining and spray-applied lining. The project also highlights the benefits of working with a contractor who can self-perform a variety of trenchless and open-cut work to achieve project efficiencies.

Capital Sewer Services (CSS), a division of Capital Infrastructure Group (CIG), of Vaughan, Ontario, was awarded the project in March 2020. “This project is a unique scenario where the two projects don’t connect, but were tendered as a joint project,” says Brian Ratchford, chief operating officer for Capital Sewer Services Inc. “The Wilket Creek phase deals with all sanitary sewers and the North York phase is strictly storm water and a significantly large diameter at just under 3 m.”

Unlike other contractors, who may perform only CIPP work or sliplining work, Capital Infrastructure Group’s suite of services meant that all but 130 m of shotcreting on the North York storm sewer was able to be completed in-house. 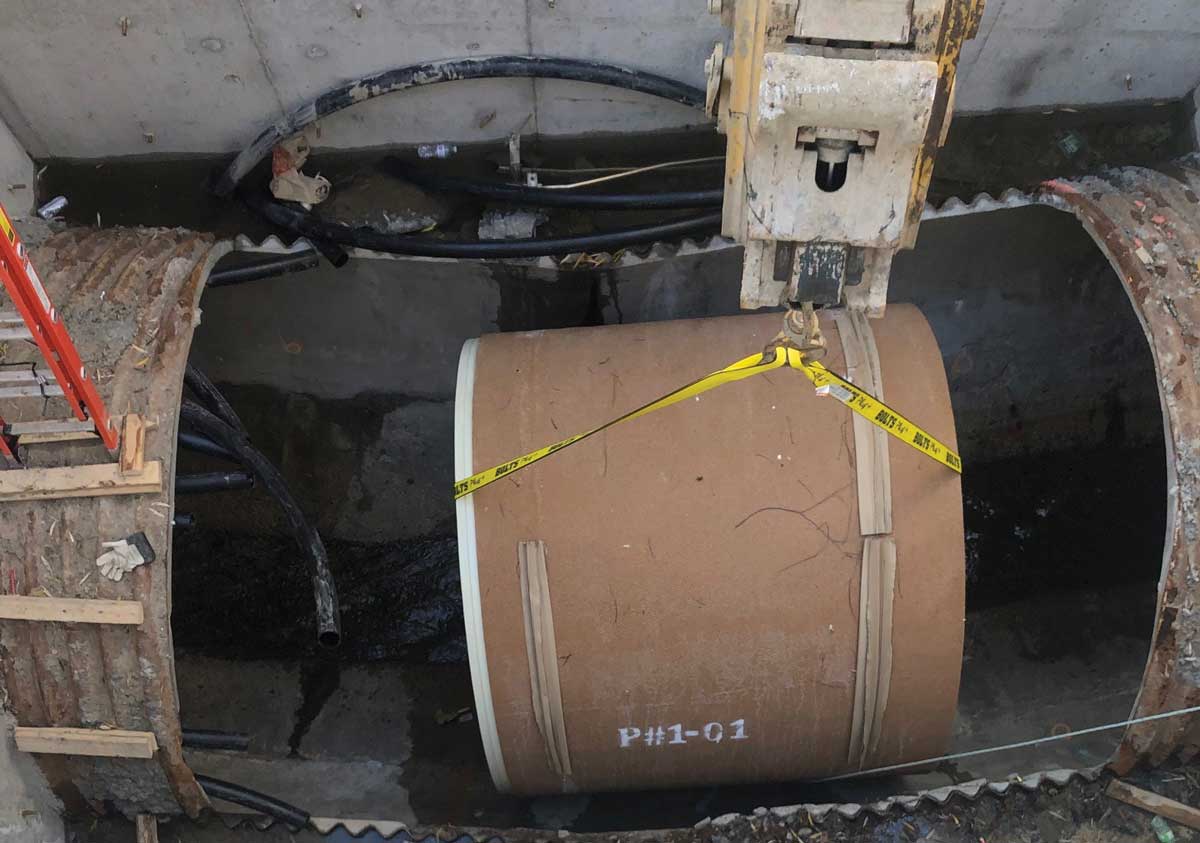 Work on Phase 1, the rehabilitation of the Wilket Creek Sanitary Trunk Sewer from MH133-91 to MH133-71, commenced in April 2020 and involved the rehabilitation of approximately 1,230 m of 675- to 750-mm diameter concrete pipe. It was identified for repair by Toronto Water due to holes, fractures, circumferential fractures, longitudinal cracks, encrustation and heavy root mass.

The works were primarily through a residential neighborhood and two recreation areas. The project took place between the intersection of Spring Garden Avenue and Kenneth Avenue to the south side of Highway 401 near Upper Canada Drive.

“Because we used CIPP, we were able to make installations from side or main streets. We were able to shoot long lengths, which cutdown on our footprint and minimized damage to the park,” says Ratchford. He noted that this was important especially in the early days of the pandemic. “This was a busy spot during the initial run of COVID from March to May. It was one of the few places where people could be outside and socially distance themselves. The park was fairly busy because it is in the center of a large neighbourhood.”

A small footprint and decreased encroachment were only one of the benefits of using CIPP for the rehabilitation. This stretch of sanitary sewer was prone to sediment build-up and root intrusion. Going with CIPP provided a tight-fitting liner with minimal loss of interior surface area. Though there was a slight decrease in size, the flow capacity is maintained or increased due to the smoothness of the new surface. This repair increases the life expectancy of the sanitary sewer for at least another 50 years.

The work was straightforward in terms of a CIPP project with no real curveballs thrown their way. Though the discovery of a nearby trunk main did provide the team with a unique benefit in terms of the bypass.

“We were able to design a method to transfer flow from the main we were working in to another main without running a significant bypass through the park space,” says Ratchford. “This was a big plus to the project because it allowed the greenspace to continue to be used with a minimal impact on the actual rehabilitation works that were going on.” 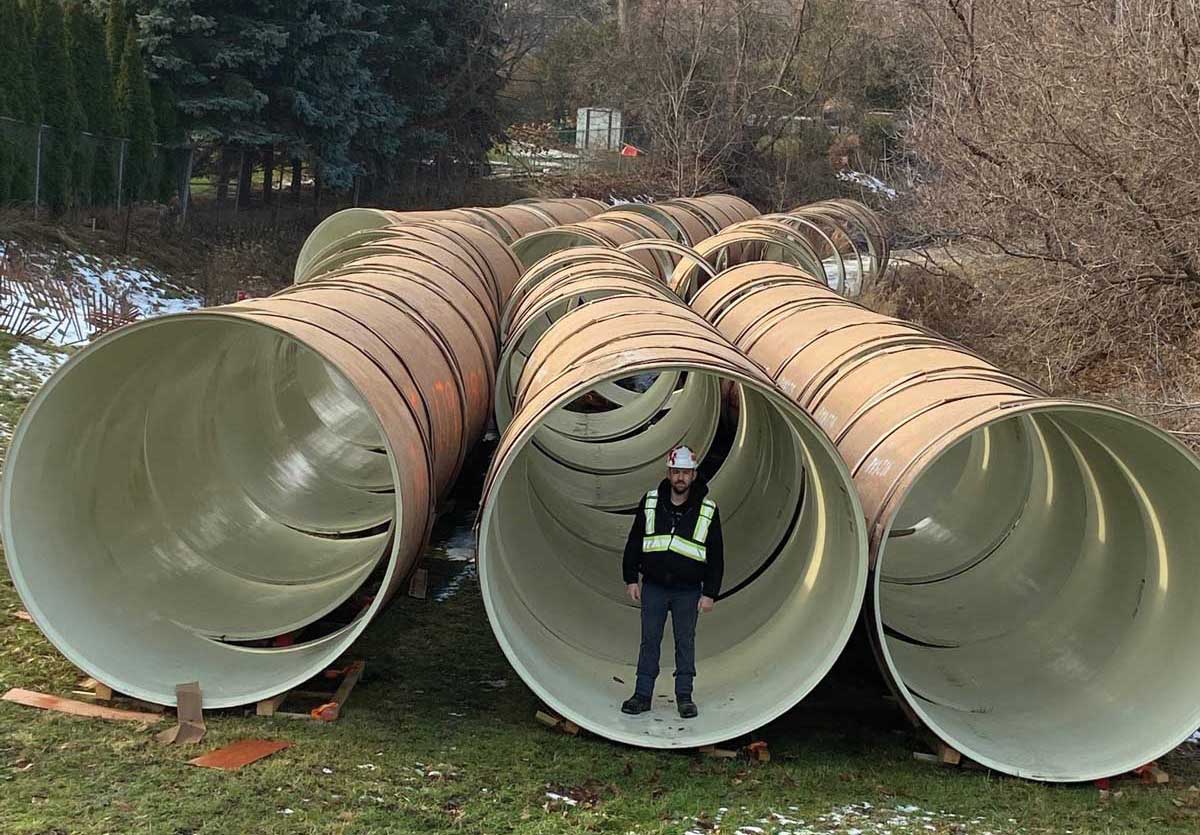 Tyler Leeming, CIG project manager, stands inside of the 2,400-mm GRP liner, giving some perspective on the size of pipe being used for the sliplining. The delivery shown accounts for about 10% of the project.

The North York section involves the rehabilitation of a 3,000-mm corrugated steel pipe (CSP) that was showing signs of corrosion and imminent failure at a few sections. In fact, a small section of the sewer collapsed and required an emergency repair in 2018.

The rehabilitation of the North York Storm Trunk Sewer took place from MH380-004 to the outfall between the Black Creek and the east side of Keele Street. Work began on this portion concurrently to Phase 1.

The overlap in the phases was necessary because Capital Infrastructure Group had to complete a LiDAR scan of the sewer prior to ordering the GRP segments. It also needed to construct the watertight shafts to allow for the installation, as this sewer was much deeper — up to 12 m — below the surface.

This considerably more labor-intensive portion, Phase 2 is broken into three construction methods — 80 per cent sliplining, 10 per cent direct bury and 10 per cent shotcreting. The CSP storm sewer was showing various stages of degradation. It was in the most deteriorated stretches that Toronto Water specified the direct bury installation.

Toronto Water mandated the use of segmental glass reinforced plastic (GRP) pipe and Capital Infrastructure Group selected the Channeline product for this installation. Channeline’s segmental liners made it possible to negotiate the vertical and horizontal bends in the storm trunk sewer.

“The sewer is not a straight run from Point A to Point B,” says Ratchford. “If you were to walk inside of the pipe, you are actually walking up and down a series of inclines. That is a result of the ground itself and the elevations that the sewer needed to be constructed to follow the existing profiles on the surface.” 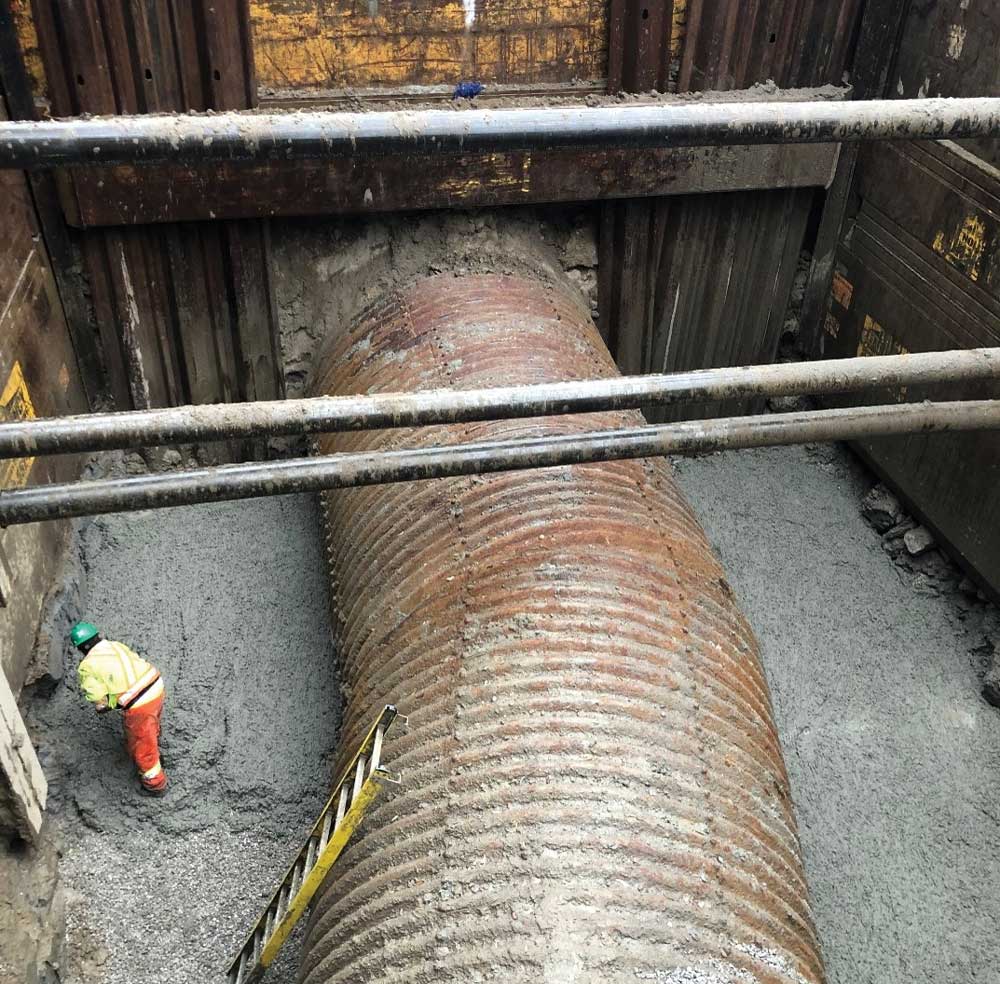 CIG constructed several access shafts for the sliplining project using alternate methods. Shown here is a slide rail shoring system to support a combination of a poured in place and precast watertight shafts.

In the direct bury portion of the project, by using cast-in-place pipe anchors, Capital was able to use the Channeline product. This gives Toronto Water a consistent pipe material from start to finish.

“It’s daunting to walk through a 10-ft pipe and think about relining it but as you get into it, you find out very quickly that it’s not that much different than other projects it’s just a matter of finding the right tools and the right crew and making it happen,” says Ratchford.

Though there were some challenges during this phase, the biggest came before the work even began. A portion of the storm sewer – a segment of the section being rehabbed – collapsed when intense storms blew through the region. This required an emergency repair to a 20-m stretch of sewer and because Capital Infrastructure Group offers these services, they were able to jump in and complete the work with minimal impact to the project timeline.

“The pipe failed and started to create a sinkhole in one of the park areas. Over the course of a few weeks, we had a couple rain events and it was obvious there was a major issue there,” says Tyler Leeming, Capital Sewer Services project manager. “When the project was awarded, it was called out as a 2 m repair, but the sinkhole worsened and encroached on a nearby roadway where there could have been a potential collapse.” CIG, innovated and designed a GRP panel carrier to position the 2,400-mm segments inside of the 3,000-mm storm sewer.

Capital Infrastructure Group worked quickly to get its crew there, dig out the sinkhole to the roadway and install soldier pile and lagging shoring to retain the roadway from collapsing. It then installed the 20-m section of new CSP, backfill it and begin work on the project. This added about three weeks to the project, a considerable time and cost savings vs. that work being sub-contracted out.

Work on the Wilket Creek portion is complete, and at deadline the North York portion is ongoing with completion of the project in the fall.

“A job of this size has really helped us in furthering our experience. Like a lot of projects, you’re learning as you go and finding better ways to do the work, which will benefit us down the road and makes us more competitive on future projects,” Ratchford says. “This was a perfect job that highlights the myriad of work Capital Infrastructure Group performs. It highlights our strengths as an organization.”