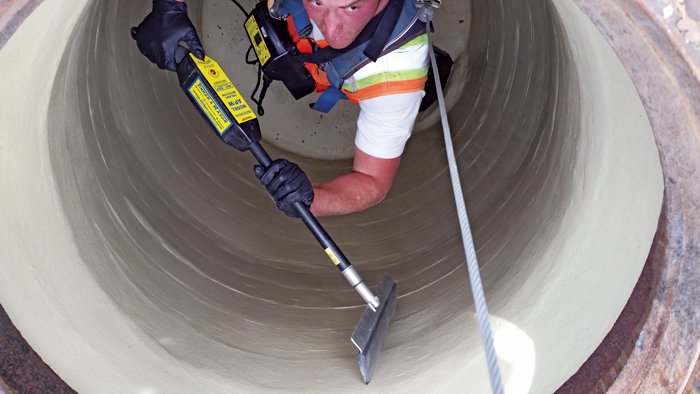 Published by Contributing Author March 18, 2016 View Profile
American Fork City, Utah, a municipality located south of Salt Lake City, recently completed the Utah Valley Drive pipeline and manhole rehabilitation project, a trenchless project that used a holistic approach to rehabilitate more than 6,100 lf of sewer pipe — 10 to 18 in. in diameter — 22 manholes and 22 lateral connections in a busy and growing business center that is home to a number of high tech and manufacturing companies in the area.

The problem that American Fork City faced and successfully overcame was extensive infiltration that was occurring in the area, particularly during the period of spring runoff. Municipalities of the greater Salt Lake City region, due to their proximity to the Wasatch Mountains, typically experience significant infiltration issues that can cause capacity issues within the collection and trunk line sewer systems, and add to unnecessary additional treatment costs.

“The City was allocating a lot of resources and man hours from our limited budget to monitor the sewer system on Utah Valley Drive multiple times per week. Our primary goal for this project was to eliminate groundwater infiltration,” said Aaron Brems, sewer department superintendent for American Fork City.

Recognizing these infiltration problems through frequent visual and video inspections, flow monitoring efforts and knowledge of its system, American Fork City along with its engineering consultant, Horrocks Engineers, took a proactive approach to knock out this infiltration problem by implementing a well planned holistic rehabilitation strategy that would yield significant infiltration reduction results and a strong return on investment. More than 6,100 lf of UV-Cured CIPP lining was installed by the time the project was completed.

Based on recommendations from Horrocks Engineers, the best value design approach taken for the project centered around the use of cured-in-place (CIPP) pipe lining, more specifically ultraviolet (UV) cured CIPP due to its superior performance in wet applications where infiltration is a significant concern. Unlike traditional steam- or water-cured CIPP lining, UV-CIPP features an impermeable layer on the outside of the liner that prevents water from interfering with the resin, and its precision light curing system consistently provides a high-quality final lining product. In addition to CIPP lining, lateral rehabilitation using a state-of-the-art lateral lining system was specified along with high build 100 percent solids epoxy manhole lining, with use of chemical grout, as needed, to provide a complete rehabilitation solution for the project.

The project was bid in November 2014 and C&L Water Solutions, a trenchless contracting firm that serves the Rocky Mountain region and is a certified installer of the Saertex UV-Cured CIPP lining system, was the successful low bidder. Construction began in January 2015 and was completed in May 2015. A total of more than 6,100 lf of UV-Cured CIPP lining was installed by the time the project was completed, with 22 manholes lined using Environmental Coatings Sewershield 150, a high build 100 percent solids epoxy system, and 22 laterals rehabilitated using LMK Technologies Shorty lateral rehabilitation products that feature patented hydrophilic sealing technology. C&L Water Solutions is a certified installer of the Environmental Coatings Sewershield products and LMK Technologies lateral lining systems.

“We had a lot of infiltration to contend with as we progressed into the manhole and lateral rehabilitation portion of the project. Chemical grout was our friend,” stated Chris Larson, vice president of C&L Water Solutions.

Both prior to and following completion of the project, American Fork City monitored the groundwater infiltration in the project area and its affects on the average daily flow measured downstream at Timpanogos Special Service District (TSSD), the local wastewater collection and treatment plant. As the Utah Valley Drive project neared completion, the City began to notice significant reductions in flow, which was directly attributed to the rehabilitation work. The measured flow reductions were better than expected, indicating that the holistic rehabilitation strategy employed by the City was working.

“We estimate that the rehabilitation project eliminated approximately 100 gallons per minute of groundwater infiltration,” said Brad Conder, project manager for Horrocks Engineers. “Based on measured savings in wastewater treatment costs, it is anticipated that the project will pay for itself within three years. Considering that the products utilized for the rehabilitation project have an anticipated design life of 50 years, the return on investment is extremely favorable.” More than 6,100 lf of UV-Cured CIPP lining was installed by the time the project was completed.

The Utah Valley Drive pipeline and manhole rehabilitation project finished on time and on budget. “The project was a great success and is an excellent example of how effective a well designed, well planned and well executed holistic rehabilitation approach can be,” said Larson.

Due to the success of this project combined with multiple trenchless rehabilitation projects completed over the past decade, American Fork City has eliminated enough groundwater infiltration to offset multiple sewer treatment rate increases from TSSD. For example, despite a nearly 14 percent increase in treatment costs this past year, the City’s average monthly bills are nearly identical to previous years and they did not have to raise sewer rates for residents and customers.

As noted by Brems, “This is proof what we are doing is working and saving the City and customers a lot of money”.  Buoyed on by past successes, American Fork City is dedicated to investing in future trenchless rehabilitation projects.

Jeff Maier is director of engineering at C&L Water Solutions.