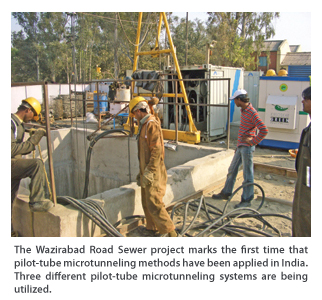 Dehli, the capital of India, lies on the bank of the Yamuna River and boasts a population of 11 million. The Yamuna River, considered sacred, originates in the Himalayas and is the largest tributary of the Ganga River.

Unfortunately, this 22-km stretch is badly polluted and posses a serious health hazard for residents as it transports almost all sewage — 50 percent of which is untreated — out of the city. Compounding this issue is the existence of an estimated 1,500 unauthorized colonies with no sewage infrastructure, a general growing population and the conversion of agricultural land into residential areas.

The first attempt to resolve these issues was the Yamuna Action Plan I (YAP-I). Unfortunately, project engineers could not foresee many of its inherent limitations. Five sewer construction projects were identified under the project Yamuna Action Plan II (YAP-II) totaling Rs 387.17 crone ($80 million USD). The entire project includes master plans, feasibility studies and an extensive public awareness and public relations campaign on the risks of the polluted river.

The Wazirabad Road Sewer is a $16 million project constructing approximately 15 km of open-cut and trenchless sewer methodologies on the northeast side of Delhi and east side of the Yamuna. The Wazirabad Road Sewer will replace existing non-operational sewer lines, as well as service a large area where sewage currently flows into drainage canals. This project was awarded in January 2008 to Patel Michigan JV and microtunneling specialists Michigan Engineers Private Ltd. The project engineers are Montgomery Watson India.

Difficulties were encountered on the Wazirabad Road Sewer due to permit and shaft construction delays, problems with the pipe quality and a shortage of trained staff. Additionally, there were not any maps of existing utilities to refer to so many shafts had to be relocated.

Shaft depths on this project range from 4 to 11 m in depth. The water table is encountered around 7 to 8 m. The ground conditions are mainly comprised of fine sand with low blow counts and are ideal for slurry and pilot-tube microtunneling (PTMT).

PTMT is generally used for new installation of small diameter gravity flow pipelines. The machines can operate out of a minimal diameter shaft and provides pinpoint accuracy through the use of a LED target viewed down the center of the pilot tubes with a theodolite and LCD. PTMT performs well in most displaceable soil conditions up to N 50 and 4 m below the water table.

The Wazirabad Road Sewer marks the first time that PTMT methods have been applied in India. Three different PTMT systems are being utilized. A total of 1,500 m of DN 500-mm reinforced concrete pipe in 2.5-m lengths will be installed using two Akkerman 308A guided boring machines and a powered cutter head (PCH) 22.5 skinned to 26 in. which is shared between the two systems. Microtunneling India Ltd., the group overseeing the microtunneling operation for Michigan Engineering, reports the longest drive to date at 136 m (450 ft).

The PCH has offered more flexibility in soil conditions for rapid and accurate bores. The jetting ports in the cutter face attach to a single hose that distributes lubrication to its four nozzles. The three pipe lubrication ports, located in the rear of the machine, lubricated the pipe and reduce jacking force. Original methodologies in PTMT use a standard reaming head and a single motor to rotate the augers for breaking up and removing spoils at the cutter face. This method, without the PCH, is limited to smaller diameters and soft ground conditions. Akkerman’s PCH line uses independent cutter face and auger drive motors for lower jacking force and a faster advance rate.

The powered cutter head operates within the typical PTMT three-pass process. First, pilot tubes are installed on line and grade with the jacking frame and a guidance system. Second, the bore diameter is increased by installing the temporary augers and casings. The third step is to install the powered cutter head behind the augers and casings. The augers are then reversed by the PCH’s hydraulic drive and push spoils to the reception shaft while cutting the tunnel to the final pipe diameter. The final product pipe is installed behind the PCH. As each section of augers and casings is removed from the reception shaft, a section of product pipe is installed in the launch shaft until the total drive length is complete.

During the Wazirabad Road Sewer, a total of 6 km of pipes in diameters ranging from 450 to 1,800 mm will be installed via PTMT and four slurry microtunneling systems; 9 km of 450- to 2,000-mm pipes will be installed with traditional open-cut methods in areas of shallow cover. 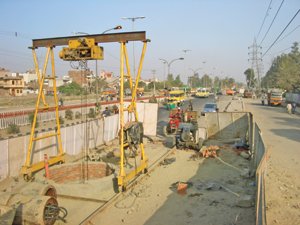 Mike Ellis of Microtunneling India states that the guided boring machine is “well suited to the construction conditions in India, is less complicated to operate, requires less training of operators and has a lower operating cost than slurry microtunneling systems.” Ellis also commented that the PCH in particular improves production and allows longer drives than other PTMT systems.

The second trenchless project, the Bela Road Sewer, was awarded in August 2008 to the same owner, contractors and engineers. The Bela Road Sewer is on the west bank of the Yamuna. A total of 6 km will be installed with 2,500 m of 600-mm reinforced concrete with a modified 308A Akkerman guided boring system and a new 28.5-in. PCH. Larger diameter pipe (up to 1,200 mm) will be installed via slurry microtunneling methods. The ground conditions in this area are soft to medium sandy and silty clay. Bela Road Sewer shaft depths range from 3.5 to 11 m.

Future contracts in Delhi include another 60 km in six separate contracts. Additionally, three more projects in Mumbai, Kolkata and Hyderabad are slated for the near future. The combination of these projects will quickly make India the busiest microtunneling region in the world.

Laura Anderson is a marketing specialist for Akkerman Inc.