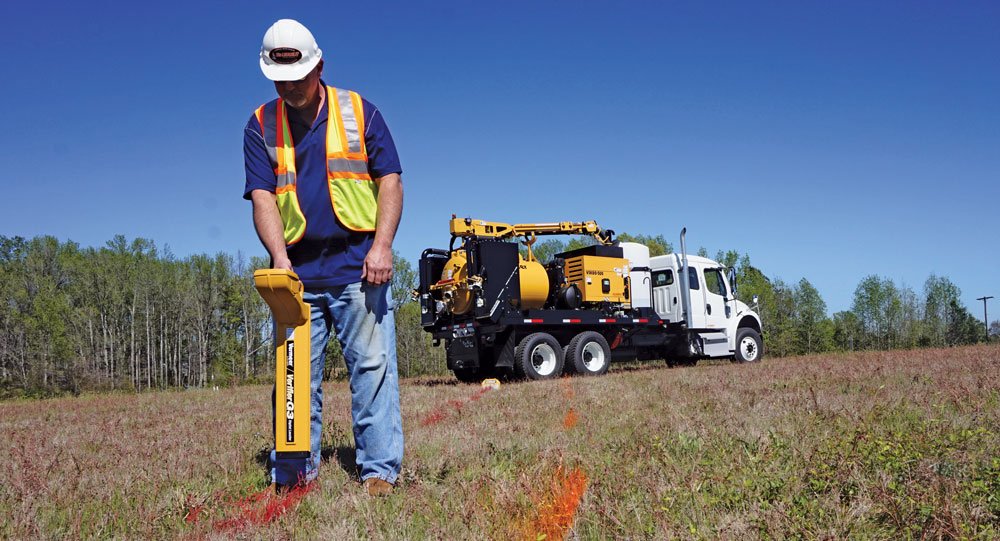 Published by Jake Jeffords January 8, 2019 View Profile
With the demand for faster data speeds increasing, more utility lines going from overhead to underground has led to a lot of underground congestion, weaving new lines through crowded utility right-of-ways. Because of this, horizontal directional drilling (HDD) crews need to spend just as much time planning as they do drilling.

The old saying in the carpentry business is “measure twice, cut once.” Underground utility contractors wanting to avoid costly and dangerous utility strikes should be following a similar mantra: “locate twice to avoid an accidental cut.”

Simply calling 811/One Call and waiting for someone to come out to mark utilities isn’t enough anymore. Before a crew starts drilling, they should first use their own locator to verify all the marked utilities, as well as anything that may not have been marked. After that, teams need to pothole to confirm depths of all utilities near the bore path, as well as any lines they will intersect along the way.

Why Calling in a Locate Isn’t Enough

According to Tallahassee, Florida, utility contractor Tim Selvey, with Bartell & Associates, HDD crews that just pop the head in the ground and start drilling are taking a huge gamble.

“The hidden dangers go well beyond just getting tangled up with a buried fiber-optic conduit,” he said. “Anytime a crew is working around buried power or gas lines, they are putting the lives of everyone in the area at risk. And, everyone on a crew needs to understand that at the end of the day. When a utility strike happens, it doesn’t matter who’s at fault when the safety of people is involved. At minimum, a utility strike causes production delays, and unfortunately, in our line of work, that’s usually the best-case scenario.”

The two HDD crews of Bartell & Associates perform a mixture of small diameter telecommunication, water, sewer and powerline bores in and around Tallahassee. Both crews use a Vermeer utility locator built by McLaughlin to verify USIC markings and then pothole any lines that will intersect a bore.

“Locating services usually do a pretty good job of getting everything marked,” said Selvey. “However, there is always a chance they missed something. Someone has an off day, or a non-conductive line isn’t documented, so they aren’t necessarily looking for it. We hear those types of stories all the time, which is why we invest in locating equipment and take the time to teach our team how to use it.” Importance of Support and Training

Just having and using a utility locator isn’t enough — HDD crewmembers must understand how to use them too. According to Selvey, locator training was a concern of his before investing in his first locator. “If people don’t know how to use a locator, they aren’t going to use it properly, and then before you know it, the locator is just sitting on a shelf collecting dust. We didn’t want that to happen, and after consulting with our Vermeer Southeast sales representative Adam Zehr, we purchased two McLaughlin Verifier G2 utility locators a few years back. Just recently, we upgraded to the latest model — the Vermeer Verifier G3 locator built by McLaughlin.”

The team at Vermeer Southeast helped Bartell & Associates crewmembers learn how to use the locators, but now Selvey said his team is pretty self-sufficient at training new employees. “The McLaughlin locator is pretty easy to learn how to use, and they are accurate,” he said. “When one team member is training another, he or she will show them how to hook on to a particular utility line, listen for the tone and then pothole to verify they did everything accurately. It’s usually a pretty quick process.”

RELATED: Training the Next Generation of HDD Operators

Selvey also explained another benefit of using a locator in conjunction with potholing utilities is the ability to reduce the risk of misidentifying a utility. “In a lot of the areas where we work, we’ll run into utility lines being stacked on top of each other,” he said. “If a crewmember isn’t paying attention to everything buried in a spot, they may only expose the top utility which could lead to a utility strike or cross bore. On jobs like that, it’s important for us to directly connect to each utility so we can have pinpoint accuracy of where every line is going and the approximate depths. After that, we will dig until every line is daylighted.”

Those risks are why Selvey spends so much time with his team reinforcing the company’s process for verifying utility locations. “We’re a small company with a good reputation. All of our business is through word-of-mouth — we don’t even have a website,” he said. “Utility companies know we do good work, which is why we always have plenty of it. It’s important to us that we keep it that way.”

RELATED: Vacuum Excavation Market Continues to Evolve as the Industry Looks for Safer Ways to Dig

Spending more time on the front end of an HDD project verifying locates and exposing existing utilities should be part of every contractor’s process.

Jake Jeffords is director of marketing and global accounts at Vermeer MV Solutions. McLaughlin Underground is a Vermeer company.