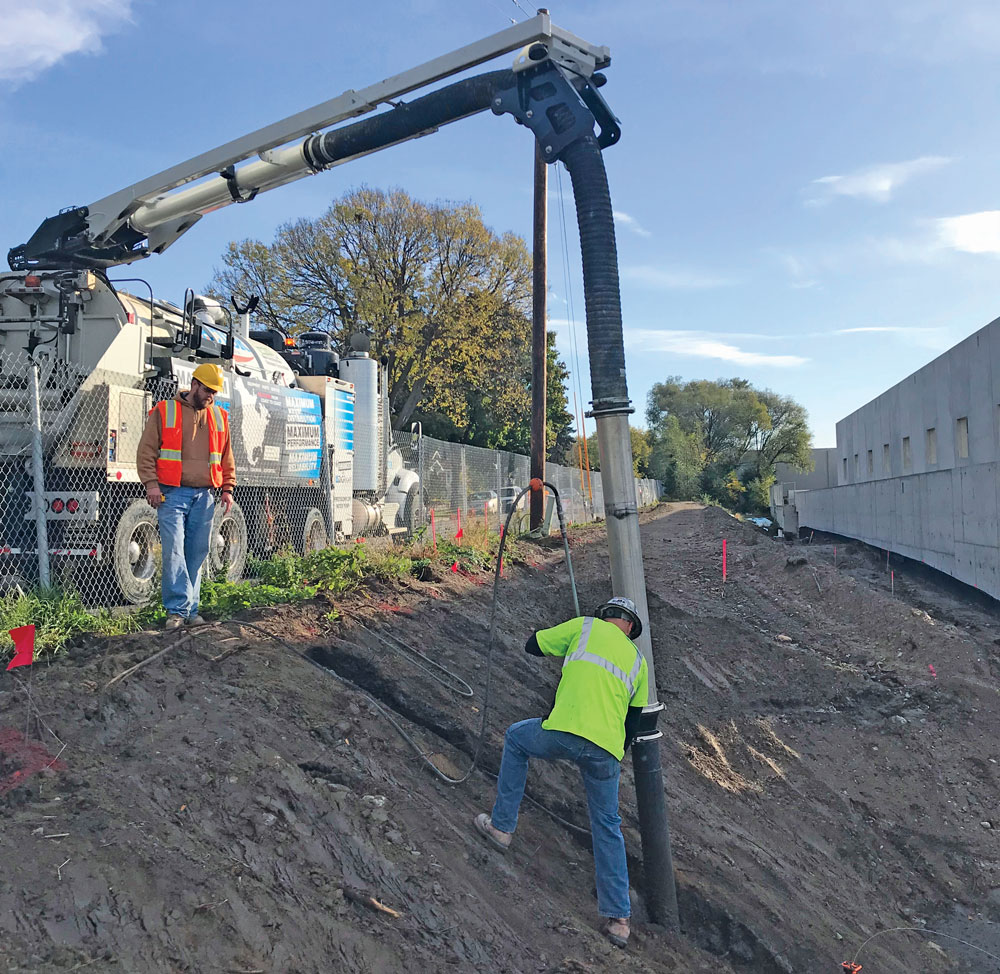 Use the words faster and safer in a room full of construction professionals and there is no doubt that everyone’s ears perk up. Say vacuum excavation, and maybe not so much, but that is quickly changing as utility owners and members of the Common Ground Alliance (CGA) and the Canadian Common Ground Alliance (CCGA) push for safer digging around underground facilities.

This focus on safe digging, coupled with an increased need for more underground facilities, led to a sharp increase in the number of vacuum excavation contractors across the continent.

What was once an oilfield-centric industry, vacuum excavation has quickly blossomed into all sectors of construction, from horizontal directional drilling (HDD) slurry clean-up, to utility locating, potholing, slot trenching and more. Today, vacuum excavation units are seen on municipal jobsites on a daily basis.

“The growth in vacuum excavation is largely due to the increased focus on preventing utility strikes and improving job site safety. There’s a tremendous risk of injury and expense associated with power/service outages, burst waterlines, gas explosions and damaged property that can result when a buried utility is struck during mechanical excavation,” says Nick Bruhn, product manager, Vactor Mfg. “Vacuum excavation increases work site safety and decreases the cost of digging by minimizing the risk of utility strikes.”

Today, vacuum excavators come in a variety of sizes, from small trailer- or truck-mounted units to larger and more powerful chassis-mounted units akin to a sewer cleaning truck. Some companies have even mounted vacuum excavation units to tracked crawler carriers to access areas where road-going vehicles cannot travel. And then there is the decision about vacuuming with water, air or both. All of the decisions on size and suction type are based on what kind of work and the region where the work is being performed.

“These extremely versatile machines are used on any application where there is potential for ground disturbance, such as large excavations, utility locating and directional drilling,” says Ben Schmitt, general manager at Alberta-based Westech Vac Systems. “With the growing use of HDD, vacuum excavation is the only sure way to excavate without damaging valuable infrastructure.” Vactor and Westech make up the vacuum excavation component of Federal Signal’s Environmental Solutions Group, and, between them, manufacture seven different vacuum excavators.

“Vacuum excavation has grown steadily in all regions. Due to the versatility, vacuum excavators can be configured to optimize performance in most conditions – and for most applications,” says Bruhn. “The surge in infrastructure upgrades and expansions, new pipeline build-outs, and telecom expansions across North America has spurred the demand for vacuum excavators.”

How much has the industry grown? What was once the realm of smaller contractors with one truck doing sub-contract work for larger contractors, the industry is seeing more and more of the large contracting firms adding vacuum excavation to their portfolios. This gives customers an all-around solutions provider.

One Ontario-based company actually worked in the opposite direction. Super Sucker Hydro Vac Services Inc. started in 2001 as a one-truck company and has since expanded its fleet, as well as its services, and has several facilities across Southern Ontario. The company is also on the leading edge of the industry in Canada with the incorporation of dry suction equipment to compliment its fleet of hydro (wet) vacs.

“In Ontario, it has really taken off and grown dramatically in the last 10 years,” says James Stieva, director of marketing and communications at Super Sucker. “There has been a lot of underground infrastructure improvements and work in the province across the board. Our hydro vac excavation industry has grown right alongside of it.”

Super Sucker’s projects are focused squarely on the utility side of the industry and its primary customers are municipalities, telecom, electric and natural gas utilities.

Stieva says there have been two main drivers for this growth in Ontario. These same drivers can be broadly applied to the whole vacuum excavator industry across North America.

First, he says, is the construction industry labor shortage. When work needs to be done, generally there are less people to do it. If the contractor is relying on manual excavation, the project will take longer and require more workers to complete the tasks in a timely fashion. Vacuum excavation has proven to be a safer and faster alternative and requires less manpower. The second driver is an increased focus on damage prevention to protect construction workers, home owners, businesses and the infrastructure itself.

Stieva notes that about 10 years ago Ontario began mandating locates — which grew the industry — and a year ago, the province implemented regulations that directly impacted the way vacuum excavation companies operate. That, in turn, led to an evolution of the equipment.

“Regulations have significantly changed the way the industry operates. The province of Ontario, for example, is one of the largest markets for vacuum excavation. The local vacuum excavation market just went through a significant regulation change regarding the classification of vacuum excavators,” Schmitt says. “Up until the middle of last year, vacuum excavators in the Ontario market were considered road building machines (RBM), which made them exempt them from many DOT regulations — most specifically, weight compliance. The RBM exemption was recently removed, which sent the industry (users and manufacturers) into panic mode. As a result, Westech and our sister company, Vactor Mfg., have developed specific configurations for this market to help our customers better comply with the new regulations while maximizing their legal payload and productivity.”

Vactor, for instance, worked with its customers to design a truck — the Vactor HXX QX — that meets regulations where the customer faces weight limited challenges and at the same time maximizes the trucks’ legal payload.

“Customers are often looking for a broader range of storage capacities, operating flows and pressures, vehicle sizes, axle capacities, boom reach and carrying capacities,” Bruhn says. “They are also looking at the ability to perform additional tasks either on the same job site or in different applications.”

Vactor and Westech are not alone when it comes these payload changes. Other manufacturers have taken note and designed new equipment that is optimized to carry these smaller loads. The alternative is operating a larger truck at decreased capacity, which is considerably less efficient.

For a look at some of the latest vacuum excavation offering, check out our 2018 Vacuum Excavation Product Showcase.

“The industry is handling this in a variety of ways. We have integrated some smaller redesigned equipment that operates more in line with the framework that we have to operate in,” Stieva says. “For us one of the big things is the addition of dry suction excavation into our fleet. We believe suction excavation is one of the huge innovations out there and it is quite the game changer for us.” Vacuum excavators, like the Westech Wolf in this photo, are becoming more common in residential areas as contractors are looking for the most productive way to dig safely around buried infrastructure.

Super Sucker’s Dino Series vacuum excavators, from its sister company Ox Equipment, offers the company the ability to dig dry. When they dig dry, Super Sucker is able to off load the material onsite — either for reuse or into a bin. That means that the material, and the equipment, does not leave the site and Super Sucker does not have to worry about the weight compliance factor. It also means the customer can save on trucking because it costs less to haul a bin to a disposal site than drive a hydro vac with slurry in the tank.

While Stieva sees the Ox Equipment offerings as a game changer, he doesn’t see the traditional hydro excavators going anywhere. Rather he sees overall growth ahead both for Super Sucker and the industry as a whole.

Schmitt agrees noting that, based on recent growth, the vacuum excavation industry will look much different in the next decade. As vacuum excavators make the move from the oil patch to the city, vacuum excavator manufacturers are designing smaller trucks that are easier to operate in urban environments.

“Vacuum excavation is still relatively early in its growth cycle and the technology continues to evolve. Manufacturers are continually looking at ways to improve their products for weight distribution, performance and safety,” he says. “I think we’ll see a continued focus on weight reduction and distribution, different methods of transportation (such as trailer vacs and hydrovac support trucks), different methods of cutting soil (such as water, air, and water/air combinations), different disposal techniques, hydrovac spoil reclamation and even autonomous vacuum excavation.”