Plan for Success, Then Work the Plan

Many horizontal directional drilling contractors have that one success story that brings a smile to their face just thinking about it. For Erik Carlson, owner of Pinnacle Construction & Directional Boring, Inc., in Charleston, South Carolina, that story happened on the day his team completed a 285-ft bore under the entrance roadways at the Charleston International Airport — hitting a 20-in. diameter exit hole in a wall directly below the airport’s baggage carousels.

“I didn’t realize I could hold my breath for that long,” joked Carlson. “We had the airport’s director of operations, IT supervisor, IT manager and several other dignitaries waiting near the exit hole, just to see if we could do it. And, we hit it — dead center! I couldn’t have been prouder of my team and everyone else we recruited to help us with the job.”

Starting from the Beginning

The success Pinnacle Construction experienced with the airport job can be attributed in part to proper planning; Carlson had been preparing for a project like this one for several years.

Carlson’s journey started when he joined the United States Navy after high school. He studied submarine electronics and was responsible for analyzing threat signals when a submarine was out at sea. Using the information he gathered, Carlson helped officers and the ship’s captain make decisions as to where to go, what to do and where not to be.

“I learned then that you don’t take a multi-billion-dollar submarine out to sea without a good plan,” Carlson explained. “We practiced every potential scenario that could happen — flooding, a hydraulic line rupture, electrical fire, loss of propulsion or any other kind of life-threatening situation. Diligent planning and training meant we were all prepared for whatever came our way.”

When Carlson completed his service in the Navy and got into horizontal directional drilling, he developed a similar approach to his business. “I’m an analytical person, and I’m used to processing data to make decisions, troubleshoot and train,” he said. “So, when it comes to drilling, it never made much sense to me to show up on the jobsite, stick the bit in the ground and push it through until it comes out the other side.”

From Pinnacle Construction’s first drilling jobs to their jobsites today, Carlson has trained his team to diligently plan for every scenario before work begins. The process starts by examining the bore path, identifying any potential underground obstacles and then determining how the crew will avoid them. After the locates are called in, Pinnacle Construction crews spend time talking through what potential challenges they may face on a job, long before any machine shows up onsite.

Around the same time that Carlson started Pinnacle Construction, horizontal directional drill manufacturers began to introduce technology that could aid in planning. “We purchased the Vermeer Atlas Bore Planner computer software long before anyone else we knew of was talking about planning,” Carlson explained. “I knew taking the time to plan jobs would make us more efficient, more professional, and would help us avoid potential utility strikes and other safety concerns.”

Carlson upgraded Pinnacle Construction’s planning process when the Vermeer BoreAid design tool was introduced. “BoreAid design tool gave us the ability to plan and present more three dimensional, which is extremely helpful for larger-diameter bores,” Carlson explained. “And, when I heard about Vermeer Projects productivity tools, I knew we had to give it a try.”

Pinnacle Construction was also an early adopter of Vermeer Projects +BorePlan productivity tools. According to Carlson, the bulk of his company’s work is for electric utility companies, and Vermeer Projects has been invaluable for DOT-permitted road crossings, where they have to prove how they will drill a shot and how they plan to avoid all the utilities.

“South Carolina’s DOT requires permits for most roadway crossings, but they are very particular about any bores that are greater than 2 in. in diameter,” Carlson said. “We used to have to take a measuring wheel out to a jobsite to plot utilities. Now with the mapping tools, we go out there with a cell phone and a 6.6-ft stick. We usually capture three GPS positions for each utility — one to the left, one where we will intersect and one to the right. It’s much faster and more accurate than other methods.”

Back in the office, Carlson can open and review the collected GPS data in Vermeer Projects. He likes to label each utility and specify who owns it, what size it is and pertinent elevation information. Bore details are then added, including the type and size of pipe being used, what directional drill will be performing the job and setback requirements. A report is then generated and combined with other project documents and then sent to the engineer on the job, who uploads everything for the DOT to review. If the DOT has any concerns, Carlson can make adjustments in Vermeer Projects and then resubmit it for approval. 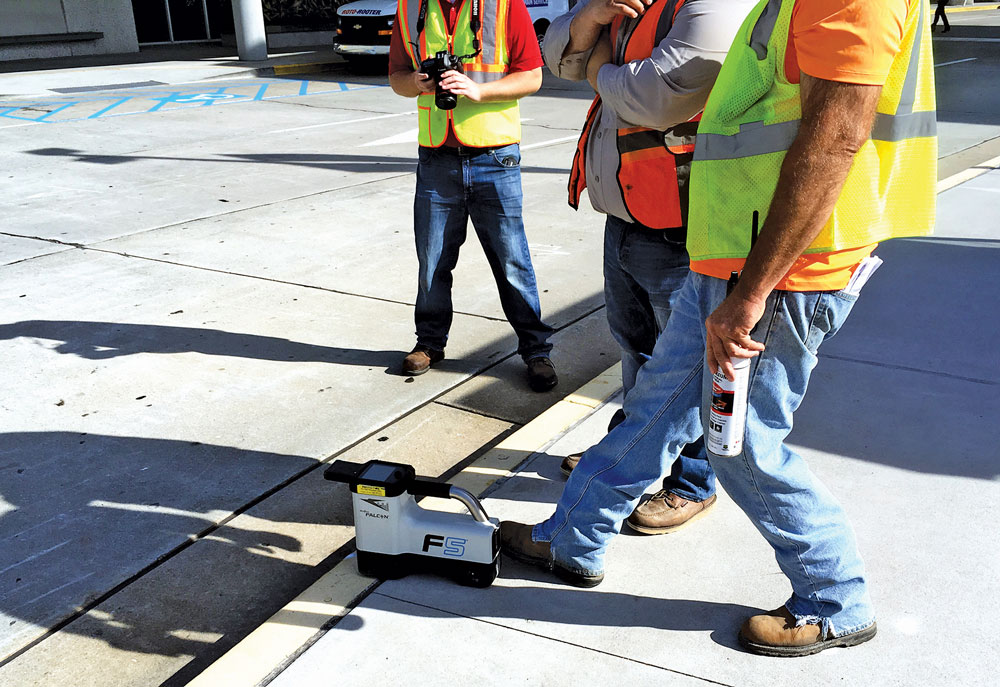 From Pinnacle Construction’s first drilling jobs to their jobsites today, Carlson has trained his team to diligently plan for every scenario before work begins.

It was Pinnacle Construction’s thorough planning process that earned the team an invitation to bid on the recent fiberoptic relocation project at Charleston Airport. After winning the job, the team went through all of its planning steps. “We laid out the utilities, brought in a private locator to verify utilities that were not publicly operated, used GPR to confirm locations under the runways, used GPS to plot our course and then plugged it all into Vermeer Projects,” said Carlson. “Everything needed to be accurate because the whole project was going to happen during regular airport operations and an accidental utility strike could cause major issues for the airport, airlines and travelers.”

The most challenging shot on the nearly 2,500-ft project was the 285-ft shot that started just outside of the airport and ended in the terminal’s basement — 12 ft below grade through a 20-in. hole located 48 in. off the floor in the baggage handling area. From there, the crew would pull back four 4-in. conduits.

RELATED: Hey HDD Market: How Are You Doing?

“Given the parameters of the job, we hired a professional surveyor to stake and map the site,” Carlson said. “He provided us with typography, as well as target points. We also brought in a sweeping company to clean up for our team and a vacuum service company to run a pipeline from outside of the airport. We still had to collect our drill slurry and couldn’t pull a vacuum truck underneath of the baggage area because of the ceiling height.”

Also, assisting on the job was a representative from Digital Control Incorporated (DCI). “We used a DCI SubK rebar sonde with the drill to help minimize interference as we crossed beneath 200 ft of 12-in. thick rebar reinforced concrete,” Carlson commented. “And, DCI, along with Vermeer, sent folks for additional support.