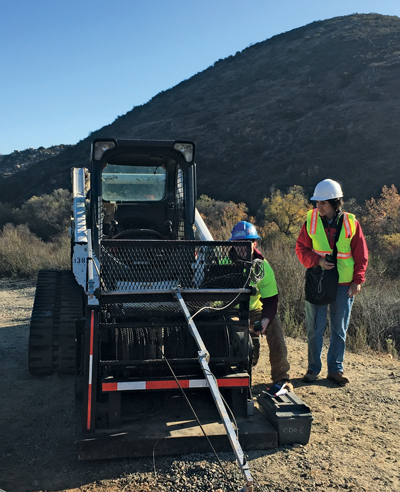 I was a little nervous as I stood at the car rental agency counter explaining to the employee that I needed a 4X4 large SUV. He said that the company did not offer 4X4s by request but he would to check to see if they had any. I was hoping he wouldn’t ask too many questions.

The steep, rocky and rough terrain we were about to embark upon for our inspection trip would not be accessible without such a vehicle. I was relieved when he found a Ford Expedition with four-wheel drive. I quickly jumped in the SUV and went off to our site, confident that we would be able to safely and effectively trek up and down the 40 degree grade dirt hills of Otay.

The pipeline we were charged with evaluating is a 14-in. steel force main that runs recycled water. PICA was called by the Otay Water District (OWD) in Spring Valley, Calif., to perform a direct condition assessment of the pipe. There had been a few leaks in the past, which caused a host of problems due to the location of the pipe. The pipeline runs through the San Diego National Wildlife Refuge. Not only are there multiple species that are protected in the area, but it is also home to several trails for runners, hikers and mountain bikers. A spill in this area could cause major concern and create a public relations nightmare for the water district.

OWD immediately took action by calling and soon after hiring Pipeline Inspection Condition and Analysis (PICA) to perform an inspection using Remote Field Testing (RFT). PICA was tasked with providing actual wall thickness measurements with a tool that would capture 95 percent of the pipe’s wall condition. This trip was not the first that PICA had made to Otay. A few years ago, PICA inspected two sections of Otay’s pipeline that totaled approximately 4,000 ft in length. PICA readily took on the challenge and successfully inspected those two sections, resulting in a significant amount of data.

The data revealed several anomalies within multiple sites that were consequently deemed “emergency” spots in the pipe. This called for a quick excavation of these pipeline sections, which confirmed findings of wall loss. Given these findings, OWD thought that there could be many other sites in need of repair; thus, PICA was again hired, this time to inspect 12,000 additional feet of pipeline.

Before PICA arrived on site, local contractors removed six butterfly valves and de-watered the pipe to clear the sludge and ensure that the tool could pass through the line smoothly. The tool was shipped from Edmonton, Alberta, Canada, and the crew, meanwhile, traveled to sunny southern California and gathered on site to begin the inspection process.

PICA uses a number of different approaches to conduct pipeline inspection with its tool. For this particular job, the team decided to use a dual tethered approach. The dual tethered approach involves setting up two winches each equipped with Amsteel rope. One winch remains at the launch site maintaining tension, while the second winch, attached to the tool, pulls the tool along the pipeline. The R&D team at PICA designed a specific winch that can provide either of two critical functions: controlling the movement of the tool or providing “back tension” on the tool during the inspection run. The 14-in. steel force main that runs recycled water for the Otay Water District runs through the San Diego National Wildlife Refuge.

The SeeSnake tool was launched from one open butterfly valve and received at the next valve opening. Once the tool was successfully launched into the pipe, it traveled at a velocity of 15 ft/minute. PICA split up into two teams, one at the receiving location and one at the launch location. It takes a lot of clear and constant communication to keep the tool moving at the correct speed, as well as ensure the correct amount of tension on the back of the tool. This is distinct from a free-swimming job in which PICA sends the tool through a pipeline using water to propel it with a pig on the front. This strategy requires even more attention and careful communication.

PICA inspected six sections for Otay, with an average distance of 2,000 ft for each section. At the end of each day on the project, PICA removed the tool with the help of local construction crews and downloaded the data off site. This data provided OWD with the resources needed to make better decisions about the management of their assets.

The Water Research Foundation (WRF) recently noted in their paper, “Leveraging Data from Non-Destruction Examinations to Help Select Ferrous Water Mains for Renewal,” that, “Replacing an old main may not always be ‘good.’ If the new main provides no substantial improvement over the old main, nothing is gained. In fact, money is lost. Evidence suggests that some of the mains currently targeted for replacement may not warrant replacement, and that money invested in these replacements could be better spent on mains where breaks are more imminent. By deferring some renewals while making other renewals higher priorities, utilities would be able to ultimately save money. Fewer mains would be prematurely discarded and fewer breaks would need to be repaired. The level of service would improve.”

There are many cities that have worked to use a system that ranks the risk of each of their pipelines. Several equations and other factors play into the “structural quality” of the pipe. An agency should do the research and always work to see if there is a better way to manage their assets. There is a tendency to remain functioning within the status quo, either responding to a pipeline’s problems on an as-needed basis as structural weaknesses declare themselves — a reactionary approach — or designating pipelines for replacement based on age — an arbitrary approach. Both of these more traditional methods for pipeline maintenance lack a strong evidence base and cost-effectiveness. PICA provides the solution. By collecting pipeline data in real time, PICA empowers its clients to make informed decisions about how to prioritize pipeline renewal. This ultimately results in more cost-effective pipeline management.

WRF also stated that, “condition assessment data can lead to break avoidance by identifying and proactively repairing pipes that may fail. Avoiding breaks can also lead to customer benefits including reliable service, reduction of unplanned outages, and positive customer perceptions. There are financial benefits from break avoidance including lower repair costs for planned repairs, less damage to surrounding infrastructure, and fewer claims from private parties stemming from pipe failures. Social impacts of pipe breaks include traffic and business disruptions. Also, there are environmental benefits to avoiding breaks such as habitat damage, unnatural sediment build up, and negative water quality impacts from discharged water.”

There are countless different technologies available for engineers to use. There is CCTV, average wall measurements, leak detection, and remote field. There is no perfect way to complete an inspection, but rather each separate municipality should analyze the costs and benefits of each technology to determine which is likely to be most effective for the job at hand. The SeeSnake tool was launched from one open butterfly valve and received at the next valve opening.

On this project, PICA employed its Remote Field Testing. Each Remote Field tool consists of an “Exciter” component and a “Detector” component. The Exciter emits an electromagnetic AC field that communicates with the detector. When the pipe wall become thinner (e.g. corrosion, pitting) or thicker (e.g. bell & spigot, sleeve), the detector records a change in the signal. Because these tools are recording data 360 degrees around the circumference of the pipe and every few millimeters along the pipeline, PICA is able to generate a comprehensive profile of the pipe. This quality of information can profoundly empower an engineer scheduling pipeline repairs and rehabilitation.

In the end, high-quality data from the Otay inspection was delivered to the client such that it was able to take the necessary steps to ensure the safe operation of this valuable asset. The final report included the number of pipe segments, their lengths, number of girth welds, average pipe wall thickness, along with the most significant information: the size and depth of localized defects, pipe wall thinning and stress indications.

The project in Otay demonstrates that this technology is extremely useful to engineers working to manage their assets. With this information, they are able to make great decisions regarding the replacement and management of their pipe. As we say at PICA, “Good decisions start with good information.”