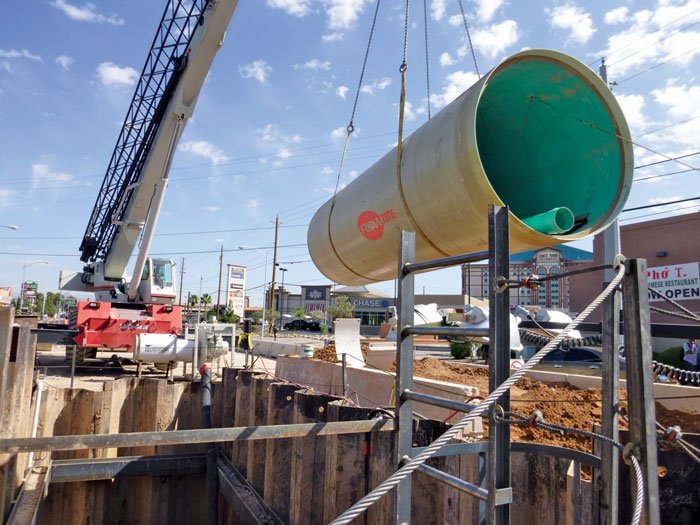 Jacking Pipe Helps to Upgrade the Sewers in Las Vegas

Published by TT Staff January 22, 2016 View Profile
The Paradise Whitney Interceptor (PWI) is an extensive gravity pipeline being built in Las Vegas by the Clark County Water Reclamation District to maintain a safe and reliable infrastructure for delivering wastewater from homes and businesses to the treatment facilities. The existing pipelines are currently at or above capacity, and this new pipeline will help to relieve current deficiencies and provide capacity for the future.

The PWI project is so large that it has been divided into three phases, with an overall predicted completion in January 2017. Geological investigations at an early stage of the project revealed the variable nature of soils in the region. Areas of sticky clay, collapsible soils, dewatering-induced settlement, high groundwater, and even cemented caliche were present in the pathway of the pipeline. The main issue to be encountered, though, was to work around existing structures.

About half of the proposed five miles of pipeline (Package #2 of 3) was in proximity to sensitive underground utilities and had limited surface access. Achieving an optimal path meant that trenchless technologies would need to be implemented. Even by utilizing trenchless technology like microtunneling/jacking, some drive lengths would have to be more than 1,000 ft. These challenges could have been overwhelming for the engineers, but one manufacturer was able meet all of their needs: Flowtite and Thompson Pipe Group. The Flowtite filament-wound Fiberglass-Reinforced Polymer Mortar Pipe (FRPMP) was chosen for both the trenchless installation of 13,481 lf of 60- to 72-in. pipe, and a further 13,592 lf of 30- to 66-in. pipe installed using open-cut methods. Flowtite was able to handle the unique issues at hand, as well as offering unique advantages in corrosion resistance, superior hydraulic characteristics and ease of installation.

To combat the risk of deflection in areas with poor soil support and long jacking drive distances, Flowtite pipe was created with custom pipe stiffness classes in excess of 200 psi. Microtunnel Boring Machines (MTBM) and Earth Pressure Balance (EPB) machines were used and the flush-fiberglass-sleeve jacking pipe was installed. To help reduce the jacking load for some of the longer drives, intermediate jacking stations were incorporated. Ports were also incorporated in the jacking pipe walls that allowed for the injection of bentonite lubrication during the installation of the pipe. The bentonite played a key part in reducing friction between the already smooth outer wall of the jacking pipe and the native soil it was passing through. To protect nearby existing utilities, grout could later be injected into the soil through the grout ports to create a soil-cement mixture in-situ. Grout ports were also used in the slipline pipes where needed to fill the annular space between fiberglass pipe and steel casing pipe.

Slipline pipe has a thicker wall than standard pipe, but not as thick as the jacking pipe. However, they both feature the flush sleeve coupling design of the jacking pipe. The County mandates that sewer lines that cross under high-traffic roadways and railways must be encased in a steel sleeve. The carrier pipe is installed inside of the casing pipe after the casing pipe is jacked into place underneath the roadways.

The anticipated sewer velocities on this project during live flow conditions will be as high as 17.7 ft-per-second, so the interior liner incorporated in the manufacturing of the direct bury, slipline and jacking pipe for the PWI project was also custom-designed to safeguard against these operating conditions. As with all other Flowtite products, the inner liner is smooth and resistant to corrosion, even when in contact with the harsh environment which are naturally present in a sanitary sewer environment. The PWI project is so large that it has been divided into three phases, with an overall predicted completion in January 2017.

Because of the large volume of pipe needed and the limited aboveground storage space for materials, Thompson Pipe Group arranged to have pipes shipped direct to the construction site as part of an ongoing collaboration with the contractors on the project. Savings in shipping costs were made possible by nesting pipes inside other pipes of larger diameter. For example, a 30-in. pipe could be placed inside 60-in. pipe, and these two then cradled inside a 72-in. diameter pipe. This nesting allowed the total amount of truck travel to be reduced by thousands of miles, and resulted in a reduction in emissions and fossil fuel usage by nearly 30 percent. The relatively lightweight nature of Flowtite makes it possible to nest several sizes of pipe on one truck bed without exceeding maximum weight limits.

The pipe can even be stored in this fashion, thus saving space in staging areas. Smaller pipe diameters were able be stacked and bundled for shipping and storage, too.

When installation began in mid-February of 2015, Thompson Pipe Group sent a field service representative to Las Vegas to streamline correspondence between contractor and manufacturer and provide support for the Flowtite pipe products. Continuing through December 2015, an experienced field service representative has been active on site and available 24/7 to assist installation crews. This help has involved everything from inspection of incoming pipe, answering any contractor questions, helping to coordinate with project managers and shipping staff to ensure that all pieces needed are on site by the time of installation, and completing any small repairs due to shipping damage.

Thompson Pipe Group plans to offer this service until the installation of PWI pipeline is complete in 2016. One of the initial tasks of the field service representative is to present is a short, tailored orientation — called a project kick-off meeting — to the crew and the foremen on the projects in order to provide an orientation to the Flowtite products.
Needless to say, the Thompson Pipe Group representatives and internal project management staff have been highly appreciated. “Flowtite fiberglass pipes have a long service life, are easier to handle and are much faster to fabricate and put together in the field,” says Carollo Engineers vice president Greg Gould. “We’re thrilled to be working once again with Thompson Pipe Group as we install Flowtite fiberglass pipes for the Paradise-Whitney Interceptor project.”

As utility owners and municipal authorities look for ways to meet the increasing need to expand or replace existing water systems and infrastructures, the PWI serves as a good example for future pipe installation projects. Not only has the use of trenchless technology minimized surface disruptions and the impact to the public, but the use of Flowtite for direct bury, slipline and jacking pipes has shown to be extremely effective, offering contractors and owners alike many opportunities to save, both short- and long-term.

Casey Wood is a project engineer with Thompson Pipe Group.
Most Popular Posts