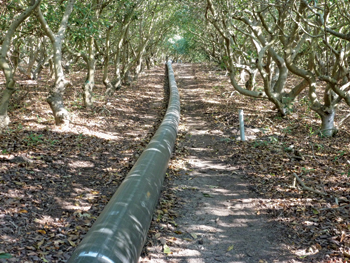 La Conchita Ranch is situated approximately 15 miles north of Ventura, Calif., off of the 101 freeway. It sits on a high bluff overlooking the township of La Conchita and the Channel Islands. The property is an active avocado and lemon producing ranch, with large acreages of avocado and lemon trees.

One feature of the ranch is the deep canyons (locally known as barrancas) that run through it from the hills to the east to the coast. Also running through the ranch are various utility lines such as gas, oil and water lines. Theses utility lines cross over or beneath the barrancas. One such line, a 14-in. water line, owned and operated by the Casitas Municipal Water District of Oakview, supplies water to the nearby Rincon beach area, which is situated along the base of the bluff. Because of flooding and erosion over the years, this water line needed to be relocated as it was now 12 ft above ground in the floor of the barranca, rather than below ground as it was originally installed, and had already suffered serious damage from flood debris.

The options to achieve this goal were limited. Suspending the water line via suspension cables was one option, as was constructing a utility bridge across the barranca. Trenching was ruled out due to environmental concerns, along with limitations on how deep the line could be installed. Directional drilling was also considered, but was in question due to the possibility of unintentional drilling fluid release, the tight bend radius required and the unknown geology due to the depth of the bore. Ultimately, the decision was made by the project engineer Mohammed Hasan of Hasan Consultants to install the 1,120 ft of DR11 HDPE pipe using horizontal directional drilling. After the bidding process was complete, the project was awarded to TORO Enterprises of Oxnard, with Ventura Directional Drilling Inc. of Ventura selected as the drilling contractor. 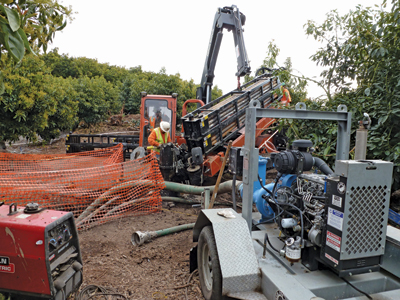 Ventura Directional Drilling president and owner John Fields was familiar with this area, having spent over a decade completing projects throughout Southern California as a directional drilling contractor. He felt that this project would be a good fit for Ventura Drilling, as it had successfully undertaken many challenging and unusual trenchless projects in the past. More than one person involved with the project expressed concern that it was not going to be possible to install the pipeline by directional drilling. The fact that two gas lines are suspended across the barranca some 200 ft away is testimony that getting under the barranca would be no easy task.

The project commenced on March 7, 2012. Access to the jobsite was via a one way road, some of which is at 18 percent grade, some of which is unpaved and all of which has bends that made semi-trailer access extremely challenging. In more than one location a mistake would result in a near 200 ft fall, and there was no possibility of backing up. The two open-top Adler frac tanks proved to be the most challenging pieces of equipment to mobilize to the jobsite, due to the placement of the rear wheels on the tank.

The drill rig chosen for this project was a Ditch Witch JT100, rated at 100,000 lbs pullback capacity. This drill was compact enough to be positioned in the avocado grove without the need to remove an excessive number of avocado trees (the contract allowed for the removal of eight trees on the entry side, but only three trees were actually removed).  Although a larger drill would have increased the “comfort” factor for the project, the logistics of staging such a rig would have proven extremely difficult, if not impossible.

The geological report provided by Earth Systems of Southern California, indicated that rock would be encountered at a depth of 34 ft beneath the flow line of the barranca. This rock was classified as a Monterey formation and as a result, the bore profile was originally designed so that at the deepest point the bore would be at the very top of this formation.

The bend radius of the bore was calculated at 440 ft, and was comprised of three separate turns. The launch angle was a 32 percent, with the exit angle being 45 percent. Of the 1,120 ft drilled, only 75 ft of the bore was drilled without any steering input, while the remainder of the bore required an average of 2 degrees steering per rod. The exit side elevation was 24 ft higher than the entry side elevation, with the total elevation change from entry to exit about 185 ft. The 440-ft bend radius of the pipeline actually exceeded the maximum recommended radius of the steering tooling by 60 ft.

The pilot bore was commenced using a jetting drill head assembly, with steering tools and pilot bore guidance provided by Slimdrill International.  The terrain along the bore alignment was so inaccessible that a large portion (over 50 percent) of the bore was drilled without the usual wire line grid because there was simply no way to layout the grid. This was one aspect of the project where the experience of Slim Drill’s Art Nieto proved exceptionally valuable.

At a depth of 130 ft, some 350 ft into the pilot bore, the Monterey formation (thought to be much deeper at this point) was encountered.  This formation was hard enough that the jetting assembly was unable to penetrate it, and so drilling was stopped. The jetting assembly was retracted and a Melford Borzall-supplied 4 ¾-in. mud motor with a 6 ½-in. chisel style bit installed. Drilling then recommenced. During the pilot bore, frequent monitoring for “frac outs” was carried out, and although a frac out plan had been developed and clean up equipment was standing by, no frac outs were noted, with good drill mud returns observed at the drill rig for the entire pilot bore. The depth of the bore at the lowest point was revised deeper by 10 to 45 ft to ensure that the pilot bore remained in the rock formation.

The pilot bore was completed in five days of drilling, with the drill head exiting just 1 ft off line.

Due to the fact that it took 15 to 20 minutes to travel via vehicle from the entry side to the exit side, the decision was made to forward ream, thereby ensuring that all drill mud returns would be to the drill rig side and so could then be processed by the mud recycling system. Ventura Directional Drilling set up a modular recycling system using 2 x 21,000-gal open top frac tanks, a 6-in. high flow pump for mud circulation/drill supply, and a 800-gpm shaker/de-silter system from Petroleum Solids of Long Beach, Calif. The recycler was situated 150 ft from the drill rig in a more open area of the orchard. The availability of this quantity of drill mud greatly assisted with the entire bore process. 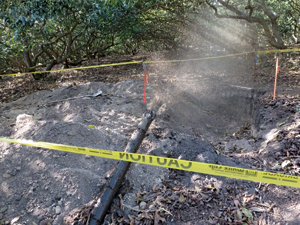 The reaming process presented one unexpected issue. Initially, a stacked 12-in. and 18-in. roller cone reamer was assembled and reaming commenced down to about 200 ft where the production rate slowed to almost zero. The reamers were retracted to the drill to find that a heavy marine type clay had balled up both reamers. The drill mud weight had not increased markedly during the pilot bore, so the appearance of this clay was a surprise. The rock reamers were replaced by an 18-in. fly cutter reamer, which managed to penetrate the formation for the entire bore length. A 28-in. fly cutter reamer was then attached to the 18-in. reamer and the second pass was completed. The material coming off of the recycler shaker indicated that the bore was indeed in a rock formation, although it was obviously highly weathered and fractured rock (soft) due to the rates of penetration achieved with the fly cutter reamers. A barrel reamer pass with a 26-in. barrel reamer was completed from exit to entry side. The 1,200 lf of 18-in. DR11 HDPE, which had previously been fused together and pressure tested and chlorinated, was then attached to a 24-in. reamer and swivel assembly ready to be pulled in. Estimated pipe weight was 44,400 lbs.

Pullback was commenced at 9 a.m. on March 31 and was completed by 1:30 p.m. Pullback pressures were around 60,000 lbs until the pipe had made the transition through the bottom of the bore, at which point they continually fell to be about 12,000 lbs at the exit of the pipe into the exit pit.

Once installed, TORO Enterprises completed the final flushing and testing of the pipe, installed all the necessary valves and fittings and then cut over the water supply from the original line to the new line. The project was completed within the project schedule and within budget. It should be many years before this line becomes exposed like its predecessor.