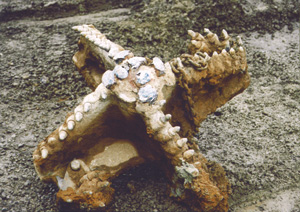 Excavating a trenchless crossing in mixed ground is no easy task. For jobs 100 ft and longer, with diameters from 24 to 96 in., a variety of tools is available. Selecting the correct option is highly dependent on the type of ground conditions, including the size of cobbles and boulders present, location of the water table and hardness of rock.

Dry Alluvium or Clay with Cobbles and Boulders

Mixed ground encompasses many types of geology. Some of the most prevalent conditions include dry alluvium to dense glacial till or hard pan clay with a consolidated matrix of cobbles and boulders. Dry alluvium is soft and generally easy to break; however, the hardness of cobbles and boulders can vary greatly from soft sedimentary rock to hard igneous rock greater than 30,000 psi UCS. Because of these variations, a wide variety of cutting tools can be used.

Conventional Auger Boring Machine (ABM) Heads
Conventional ABM heads are attached to the end of a full-face auger and utilize ripper teeth or tungsten carbide bullet bits to excavate. The bullet bits operate in mixed ground using a ripping or crushing action. Often called “Christmas Tree” heads, they are best used on shorter bores (less than 100 ft) with cobbles and boulders less than 4 to 6 in. in diameter. Larger boulders present problems for conventional heads, as the machine often needs to be stopped and pulled in order to break up large boulders with hand mining tools. In rocky conditions, specialized mixed ground cutting heads or microtunneling machines must be used.

Mixed Ground Small Boring Unit (SBU-A)
The mixed ground Robbins small boring unit (SBU-A), in diameters from 24 to 72 in., is for use with standard ABMs. The cutterhead consists of a circular cutting face mounted with either single disc cutters or two-row tungsten carbide disc cutters in combination with drill bits, depending on the ground conditions.

Operation involves welding the lead steel casing to the SBU in a launch pit.  The ABM generates torque to rotate the SBU, while forward thrust is provided through the steel casing. Muck scrapers scoop the muck from the face into openings on the cutterhead, then to a full-face auger for removal. Typical lengths for SBU-A jobs are between 100 and 300 ft, though the machines have been used on jobs up to 500 ft in length.

Tungsten carbide cutters, by contrast, can effectively excavate cobbles and boulders because they have multiple points of contact at the face. The multiple buttons act like traction, allowing the carbide cutters to ‘grip’ in soft ground and keep rotating. Single disc cutters have a single point of contact at the face and tend to ‘skid’ in soft ground, wearing flat on one side and making excavation of boulders difficult.

SBU-A technology does have some limitations; in dry conditions, it must be used with steel casing. Other types of casing, like RCCP or vitrified clay, aren’t compatible, as the machine must be welded to the lead casing. Motorized, articulated models can be used with RCCP pipe and a pipe jacking unit, most commonly on drives more than 500 ft in length.

Microtunneling Machines (MTBMs)
MTBMs can be advantageous in certain types of ground because they work on longer drives with curves and with different types of pipe, though excavation in dry ground is problematic. Microtunneling systems can utilize either a slurry system or auger for spoils removal.

Slurry microtunneling machines excavate using a pipe jacking unit and bi-rotational cutterhead. Spoils exit through large openings in the cutterhead and enter a mixing chamber, where they are mixed with water to form slurry.

In some dry conditions, the slurry pressure balance and spoil removal system can cease functioning, causing the machine to become blocked. This is because there is a lack of free water present, resulting in absorption of the slurry into the ground. The loss of circulation in the slurry system stops spoils removal at the face.

The loss of slurry on a particular job is determined by the permeability of the ground. In low permeability ground, such as clay or rock with fines, there will be little water seepage, whereas highly permeable sands and gravels may cause the system to fail. The cutters used in a slurry microtunneling system also tend to wear out faster due to the abrasive nature of the slurry mixture being re-worked at the face.

In general, auger-style microtunneling systems are better suited to dry ground, in particular to alluvium, clay and sands. These systems cannot handle ground with cobbles or rock, due to their limited torque and crushing capabilities.

Wet Alluvium or Clay with Cobbles and Boulders

This type of ground can be excavated utilizing ABMs if the water level is low, though significant water requires the use of microtunneling systems. 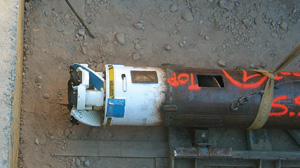 In dense glacial till or hardpan clay with low porosity, water inflow rates are usually negligible. If sections of the excavation are wet and sticky, shallow dewatering methods can be used to temporarily lower inflow rates and dry out the excavation alignment. In these cases, ABM cutting heads can be used (for rocks less than 4 to 6 in. in diameter). If larger cobbles and boulders are present or the job is greater than 100 ft in length, a mixed ground SBU-A cutting head is required.

In conditions where water inflow is more significant, a microtunneling machine must be used. The machines can be remotely controlled from an operator’s station, mitigating any risk from severe water inflows. Launch and exit seals are also used in the shafts. The seals prevent groundwater from leaking into the shafts and also prevent any slurry loss from around the outside of the casing. In high water pressures, double seals can be installed.

Rock with Clay or Dirt Seams

The types of cutting tools recommended in this ground depend largely on the expected rock strength.
Mixed Ground Small Boring Unit

In soft rock below 5,000 psi, drag bits made of tungsten carbide or steel are effective by themselves, though harder rock requires SBU cutterheads. Disc cutters are used in mixed ground conditions containing rock strengths greater than 5,000 to 6,000 psi, either in combination with drag bits or by themselves.

On cutterheads with both disc cutters and drag bits, the disc cutter stands out a little farther in profile so the drag bits are not in direct contact with the face.

When in contact seams, the bits clear out the clay and dirt that make it past the disc cutters. If very high rock strengths (greater than 16,000 to 18,000 psi UCS) are expected, larger diameter discs are used, or on smaller diameter heads, two-row tungsten carbide insert cutters may be used.

Microtunneling Machines
Microtunneling machines have been successful in these conditions with cutterheads utilizing disc cutters. The method tends to be less cost-effective and less efficient than using an SBU-A, however. As stated earlier, the cutting tools tend to wear out prematurely due to the abrasive nature of the slurry at the face.

In addition, the slurry system is inefficient in rocky conditions. Where SBU-As size the rock chips at the face, a microtunneling machine first chips rock and then sends it through the cutterhead to a crush chamber, where the chips must be further resized before being added to the slurry tube for removal. This method results in slower excavation rates when compared to SBU-As.