Published by Mike Kezdi August 15, 2017 View Profile
When you look at the Province of Ontario and try to pinpoint a hotbed for trenchless activity, it might be hard to narrow it to just one. Near the top of that list is the City of Hamilton, a long-time advocate for not only trenchless rehabilitation but also an early adopter of asset management.

Leading that charge is the Public Works Department’s Engineering Services Division, which oversees the 2,020 km of watermains, 2,900 km of sewers and approximately 155,000 sanitary laterals for the 520,000 people that call Hamilton home. And that number will only increase as the population in the city is expected to grow by 20 percent from 2011-2036.

According to Mike Zantingh, project manager subsurface infrastructure, Engineering Services Division, the city had some forward-looking leaders at the time of amalgamation in 2001 that saw the social and financial benefits of trenchless method. At the time, the city had already tackled several mainline sewer lining projects, but it was the push for a robust asset management program that kicked things into high gear.

RELATED: Leading the Pack — Hamilton, Ontario Is Known for its Asset Management Program
“Our leaders came to the realization that there was an infrastructure deficit and that is what kick-started the whole thing,” says Harry Krinas, project manager, Engineering Services Division. “Asset management is a different state of mind rather than a discipline. It is thinking outside of the box and looking at the way we deliver the service rather than the asset itself.”

Thanks in part to its asset management program, since 2002, the department has assessed 85 per cent of its sewer network by one method or another and 25 per cent of its watermains. The numbers are lower on the water side because the city bases its assessments on criticality.

Those assessments equate to approximately 400 km of mainline sewer rehab, 60 km of watermain relining to date. Most of the rehab work is cured-in-place pipe (CIPP) with some glass reinforced plastic (GRP), sliplining and other trenchless methods.

“We’ve saved approximately $15 million on sewer renewal by using mainline sewer lining,” Zantingh says. “And what kind of dollar amount do you put on the social impact savings?” A liner being prepped for insertion on a recent project.

Zantingh points to the James Street rehab project as a perfect example.
One of the major thoroughfares running in the downtown core of Hamilton, James Street is a vital transportation route for buses and traffic connecting the upper portion of the city to the lower portion. Approximately 90 buses travel on James Street every hour, it is a major corridor servicing a large hospital and many residential and commercial buildings.
Under the street is one the oldest, and largest, egg-shaped brick trunk sewers constructed around 1916.  Inspected in 2002 and later in 2008, the 900 mm by 1,350 mm sewer exhibited deterioration that needed immediate attention and an assessment of a solution to improve the life cycle performance and reduce the risk of future failures. During the 2008 inspection, three large holes were identified in the side of the pipe, resulting in large ground voids around the pipe.

RELATED: Totally Trenchless Lateral Rehab in Hamilton, Ontario
These holes and subsequent ground voids required immediate attention to stabilize the ground and avoid the eventual collapse of the road. The urgent repair work was carried out over five nights in April 2008, and was executed without the need of digs by filling the large voids with expandable foam. In 2010, the entire length of this sewer – approximately 1,750 m – was rehabilitated by CIPP lining.  All work took place during the night further minimizing social impacts.

When looking at a project, owners also look at the return on investment (ROI) and in more than one instance, Hamilton has noted that the ROI for trenchless projects is just another benefit. Krinas describes one project as another perfect example.

The city found that concrete sewer under Isaac Brock Drive, ranging in size from 375 mm to 525 mm was pulled out of round due to horizontal forces caused by rock movement. This led to approximately 200 m of sanitary sewer being severely damaged and another 300 m with minor signs of degradation.

“The damage was such that CIPP lining fell outside the design parameters of rehabilitation. It was assumed that rock movement had stopped and the pipe was in a state of equilibrium regardless its severe structural condition, and large deformation,” Krinas says. “The cost to line the sewer at the time was $68,000 equivalent to 5.2 years equivalent annual cost when compared to a full reconstruction investment of $700,000, meaning that the cost to install the liner would break even if the liner held up for 5.2 years.”
In 2003, the city had the pipes lined and continue to assess the section regularly. “The most recent examination, earlier this year, showed that there was no structural degradation or other concerns related to the liner,” Krinas notes.

Being an early adopter of the new way of looking at work, in 2008 the city’s leaders made the decision that laterals should also be under the auspices of the Public Works Department realising the connection a failing or failed lateral had on its system improvements. The city spends approximately $5 million on laterals each year. It averages about 1,200 lateral inspections each year and rehabs about half of that.

“The technology was not all there in 2002 and inspection proved to be difficult,” Krinas says. “Around 2008, the industry, through better technologies, made us able to inspect laterals without disturbing homeowners or businesses.” 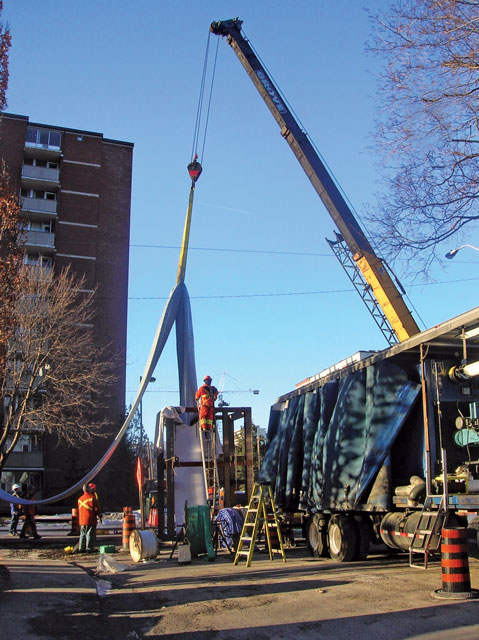 Hamilton, Ontario, was an early adopter when it comes to asset management programs, creating an Asset Management section in its Public Works Department in 2002.

To tackle all this vigorous schedule and to make sure that the proper outcomes are achieved, all of the work is scheduled on a five-year basis. The ability to create a five-year plan is made possible by the city’s right of way condition assessment and prioritized and coordinated capital program. The department can predict long term (20+ years) where and when work will need to be done. Specialized and emergency projects are tendered as separate contracts.

RELATED: Zoom Camera Technology Aids in Development of Long-Term Asset Management Initiatives
“With multi-year contracts, we get high quality contractors at a competitive price,” Zantingh says. “It also gives us the ability to put out a lot of work and make it a comprehensive program.”

On the sewer and lateral rehabilitation side, Hamilton’s current slate of work is being performed by general contractor LiquiForce and sub-contractor Insituform Technologies. On the water side, Fer-Pal Infrastructure is the contractor handling the trenchless work.

The fact that these projects can be done on a nearly invisible basis, makes continued trenchless work a preferred option for Hamilton’s elected officials. Case in point in 2005, the ward councillor for the community of Dundas was told that a rehab project would soon take place in area.

“Three months later, we were asked when we were planning to start the work,” Zantingh says. “The councillor was surprised to find out that the work was already completed. The majority of people don’t realize that we have been there.”