April showers dropped nearly 7 in. of rain over the Dallas-Ft Worth area in 2019. The torrents came just as Douglas Dailey Construction LLC was starting a pipe bursting project for the City of Mesquite, a southeast Dallas suburb. The job involved scheduled replacement of 3,100 ft of 6- and 8-in. cast iron water main and 3,500 ft of 6- and 8-in. concrete sewer.

“We were working in a flood plain. All of it was saturated ground, and in one place there was maybe 2 ft of standing water,” said co-owner Doug Dailey.”

Dailey knew conditions would be much drier if he waited a couple months. However, he was confident his experienced crew and his equipment would be successful. Dailey has been a specialist in underground trenchless methods for more than 20 years, was one of the first contractors to use the pipe bursting method in Texas and has replaced more than 2 million ft of pipe with it. At peak production during a Houston contract in 2007, his crews were replacing 48,000 ft a month with the technique.

The wet conditions in Mesquite would be a significant complication but not enough to delay the job. Dailey said he knew his crew could stay on schedule delivering a high-quality result for his customer: “We do straight-up work and do it right.”

However, this job presented some additional concerns. It was the Douglas Dailey Construction’s first job for Mesquite, and it was the City’s first experience with the pipe bursting technique – an audition, so to speak, of both the contractor and the method.


Pipe products from a several manufacturers were also being evaluated at various Mesquite projects. Although the gravity sewer would be replaced with 8-in. HDPE, the water main would be upgraded with Fusible C-900 from the Fusible PVC product line available from Underground Solutions of Poway, California. Neither the city nor the contractor had worked with Fusible PVC before. Although Douglas Daily crews have received manufacturer certification, they had no field experience in ground conditions like these to know how this new system would hold up during pipe bursting operations.

The first section to be replaced was a 1,300-ft run in the most saturated area. Typical PVC pipe in such conditions and length of run can stretch as saturated clay closes upon pipe being pulled in place. The drag can become sufficient enough to damage PVC pipe. The crew elected to divide the run, performing a 570-ft length first to determine how the Fusible PVC pipe would behave. 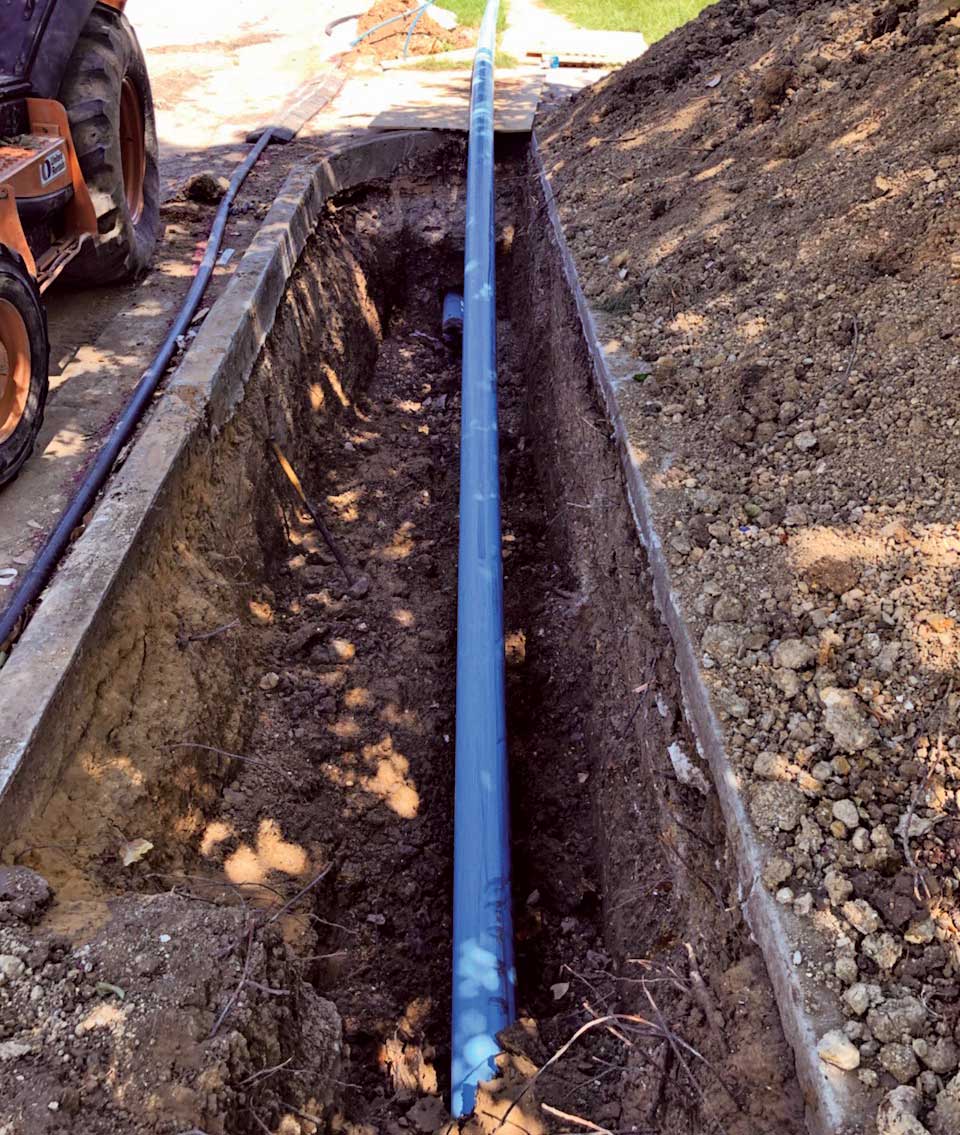 The long, narrow entry pit permits replacement pipe to slide smoothly into the exact same bore as the existing pipe beneath drives, walkways, roads and landscaping.

Douglas Dailey owns both static and dynamic (pneumatically powered) pipe bursting systems. All are from HammerHead Trenchless based in Lake Mills, Wisconsin. “We started with HammerHead 20, 25 years ago and have always been happy with them,” Dailey said. “They’re great people and work closely with us.”

One of the things he said he likes is how the manufacturer supports its equipment and their applications before and during a project. “On every job, they’re always there for us, always concerned we’re getting the most out of their equipment. One of their top pipe bursting experts was here for startup, Mark Maxwell, and our regional support guy, Chris Bahl, visited every so often to check in.”


On this project’s gravity sewer work they brought in their HammerHead HydroGuide12-ton winch and their 7- and 8-in. pneumatic pipe bursting tools.

For the cast iron water main they were replacing with Fusible PVC, they used their HammerHead 100XT rod pulling system and 6- and 8-in. pipe pilot bursting heads. The 100XT is a versatile machine offering 99.4 tons of pulling force to replace pipes up to 16 in. in diameter. 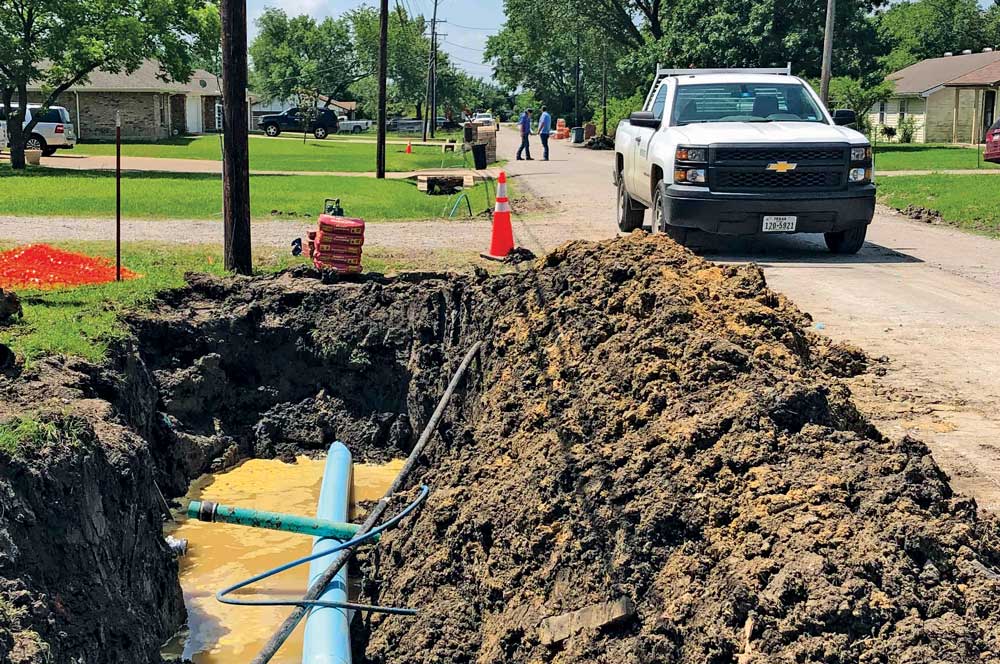 For reference, the two crew members in the street are approximately half way to the pulling pit on the horizon, 570 ft away. Glenn said in hindsight he believes the crew could have completed the entire 1,300-ft run in a single pull, given how smoothly operations went.

Douglas Dailey Construction’s other owner, Robbie Glenn, was project supervisor for the Mesquite job. “My main concern,” he said, “was keeping water off the pipe once we cut into it. The next was the effect the saturated ground might have on the pipe. Once you start pulling, you worry about pipe moving in it, coming to you rather than bursting. Would the wet ground hold it in place? And then there’s the pipe you’re pulling in. What would it do compared to other poly?”

They began at the subdivision’s lowest elevation, in the most saturated conditions. They excavated a 5-ft- by 15-ft machine pit to a depth of 5 ft and shored up the walls to hold back the unstable ground. Three 2-in. pumps kept pits dry enough for working.

Adding yet another complication to the job were saddles and repair clamps along the run. The cast iron pipe was 50 or more years old. “That’s why they were replacing it. It had a history of leaking and was costing too much to keep repairing,” Glenn said.

Some types of repair fixtures can stop a pipe bursting job, suddenly causing pressures to spike. “Some of them were documented, of course, but you never know if you’ll hang up on one you didn’t know was there. When a main goes under a road, you know, you can see where they cut into the pavement to fix it. We were working mostly in a grassy easement. We could excavate to cut them if we needed to, easily, but we might hit one we didn’t know was there.”

However, the 100XT and pipe pilot cut right through the clamps without a problem, Glenn said.

“We couldn’t even tell we’d gone through one. We were pulling at most at 58 tons and the pressure gauge didn’t move as we sliced through service saddles. It just pulled right through.” The crew counted 13 saddles they’d gone through by the end of this 1,300-foot run alone.

The ground did not seize on the replacement pipe, whose material seemed less susceptible to friction and did not seem to stretch like typical poly. The 570-ft-long trial run went so smoothly that Glenn said, “I’m sure we could have done the whole 1,300-ft run as a single pull.”

The crew had started the run with the part they thought would be the toughest, installing Fusible PVC water main in saturated ground at 10 ft a minute. The run was completed at an elevation 50 ft higher than it started, in drier clay, making operations even easier.

With the hardest part of the job out of the way, the contractor had 90 percent of the entire gravity sewer and water main replacement project completed by the end of July, ahead of schedule and within budget. Douglas Dailey’s expertise and quality equipment meant they had not only met the city’s scheduled plans but had kept on schedule with their other clients’ projects as well.

Of the Mesquite project, Glenn said, “It has been a really smooth job. We are pleased with fusible PVC and the city is, too. But it was the equipment that was the key to this job.” Glenn has used other manufacturers’ pipe bursting systems. “But the latest and the greatest equipment is from HammerHead. It’s smooth and fast and gets the job done.”