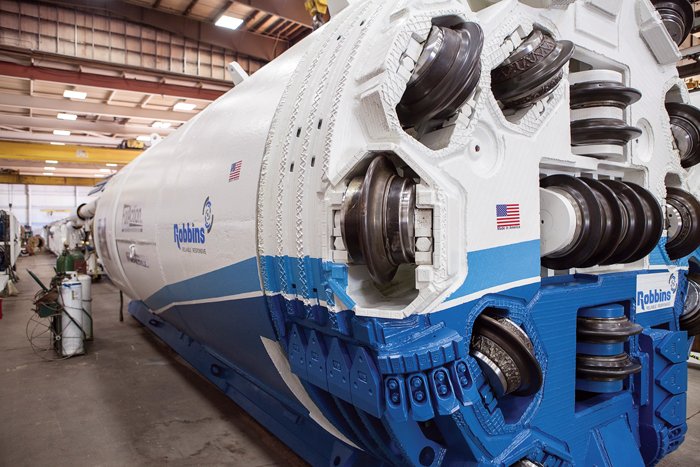 Published by Mike Kezdi April 17, 2015 View Profile
What seems like seems like an easy project – the construction of a 4 km (2.5 mi) long tunnel through the limestone bedrock of Montreal, Quebec – is actually rife with challenges including fault zones, an active underground subway line and a long-disused quarry.

In Montreal, home to more than 1.7 million inhabitants, the Water Supply Department identified building a buffer into the system for peak seasons and a growing population as a project of primary importance. Luckily, the city already had a healthy start to the project. The Rosemont Reservoir, a large structure for potable water built in 1962 but never connected, could be modernized and brought online.

Investigations of the tunnel site prior to construction were thorough. Exp Services Inc. conducted 27 diamond-drilled bore hole tests to a depth of 40 to 50 m below residential and commercial neighborhoods along the tunnel alignment. 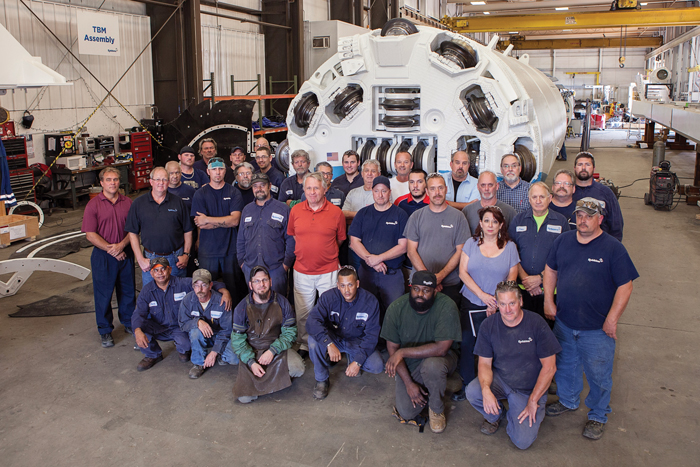 The Robbins 3.0 m (9.8 ft) Double Shield TBM was manufactured in the company’s Solon, Ohio, facility by a skilled team.

Core samples indicated mainly fine to coarse-grained crystalline limestone with average compressive strengths of 150 to 200 MPa (22,000 to 29,000 psi). The rock fit within either “good” or “excellent” scores on the RQD scale, with the exception being two sections of previously unidentified faulted rock. These fault zones included interbedded soft shale and dykes.

Foraction, Inc. took precautions prior to the start of excavation with the TBM.

“Two zones during drilling showed fractures, one with water. Cement grouting was conducted in these areas to refusal.  We went to these fracture zones, drilled 50 m (160 ft) deep from the surface, and cement grouted with four grouting holes in each of the two areas. Two holes took a lot of cement to improve those areas,” says Roger Lepinay, equipment manager for Foraction Inc. “Of course we don’t know everything about the rock there, but we reduced potential impacts where we knew there were some potential issues that could arise. Like any tunnel there may be surprises, but we do what we can to prevent any damage.” 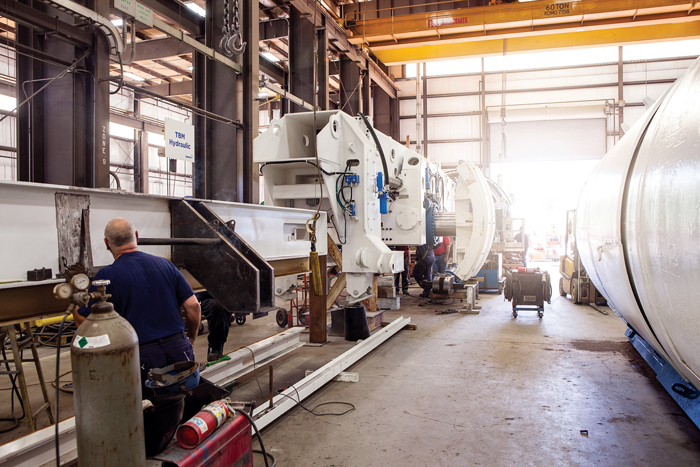 Work on the TBM in the shop required assembly in 111 hour shifts, six days per week, to make an on time delivery in Summer 2014.

The Double Shield machine was rebuilt in Robbins’ Solon, Ohio, shop after being used first on a tunnel in Melbourne,  Australia, and then on a project in Kansas City. The machine was delivered to the jobsite in Canada in 2014 following a swift assembly.

“Call it the perfect storm, or whatever you like, but the Solon shop had three machines that had to be delivered in very close succession late last summer. Our Production Manager, Dave Turner, had his team on 11 hour shifts, six days a week all summer long to meet the assembly schedules for all three projects,” says Lynne Stanziale, Robbins project manager.

The Double Shield machine is not equipped to install segment rings, but rather is designed to provide shielded protection to workers in the tunnel. A back-loading cutterhead with rugged 17-in. disc cutters provides long cutter life and safe, efficient cutter changes during excavation.

The machine was set up at the 33 m (108 ft) deep access shaft. “We launched the machine and did the first few meters before Christmas, and we are now working on improving advance,” Lepinay says.

Even with a drill-and-blasted back gallery 30 m (98 ft) in length and a front gallery of 59 m (194 ft), the TBM required an abbreviated startup arrangement. Boring began with just seven back-up decks with a capacity of two muck cars, and was converted to a full setup in February 2015.

“We now have all 12 backup decks assembled with a capacity of four muck cars. We also just installed a California switch and a second train to take the 6,300 muck loads – what will amount to about 80,000 metric tons of rock out of the tunnel,” says Lepinay.

Overall, however, Foraction hopes the ground conditions to be good throughout. “The rock is of good quality and so far we haven’t had to install any rock bolts in the bored tunnel. We can do so, along with wire mesh, if conditions require it,” says Lepinay.

Breakthrough into a 45 m (147 ft) deep exit shaft is anticipated by August or September 2015, and while tunneling is still ramping up, Lepinay is optimistic. “So far so good, particularly with the quality of the rock,” he says.
Once excavation is finished and the TBM is removed, the contractor will install the carrier pipe, in 6 m (20 ft) sections, a total of 650 pipes. The PCCP sections weigh 19,500 kg (43,000 lb) each. Once those are installed the 28 cm (11 in.) annulus will be grouted with cellular concrete.

Desiree Willis is a technical writer for The Robbins Co.
Most Popular Posts