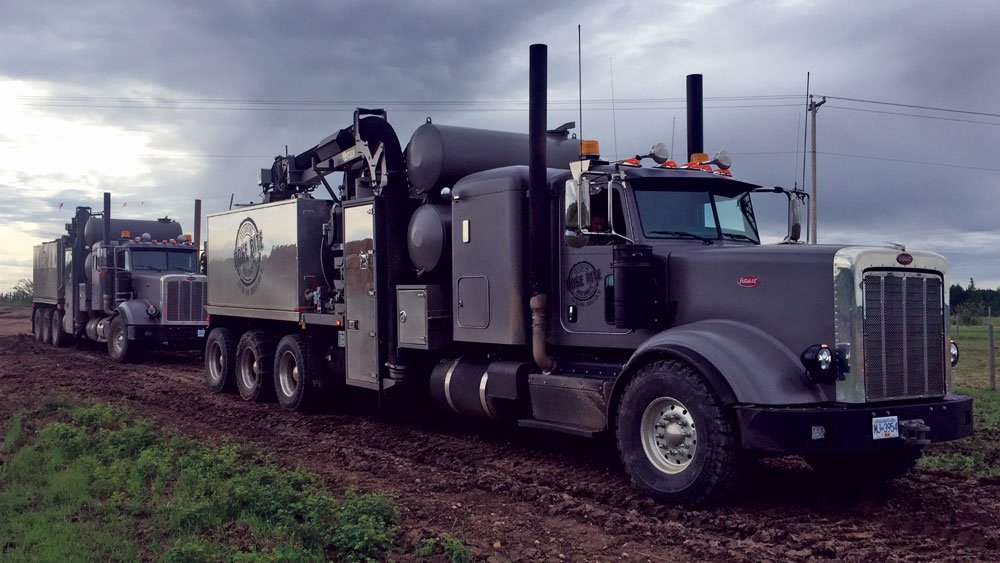 Driven by Pride: Done-Rite Daylighting Builds its Reputation on Safety, Quality and Quantity

When Clayton “Clay” Thompson began his career in the construction industry, it was on a hydro excavator working in the oilfields. That was more than 20 years and he has witnessed the rapid change in the industry first-hand both as a contract worker and a business owner.

“Having a few decades in this industry I have seen the demand grow for the use of hydro-vac excavation as a safety tool to limit the possibility of line and utility strikes, to completely excavating a facility due to the abundance of pipes,” Thompson says.

He has also witnessed the industry go from, what he referred to as modified sewer cleaning trucks, to purpose-built machines that can handle working off road in harsh environments for days, or weeks, on end. He noted that when he first started, you were fixing the truck daily before starting your excavation work and today he barely shuts off his trucks from October to March unless maintenance is needed.

“The trucks today have improved ten-fold in terms of operator friendliness, volumes, operating pressures and reliability,” Thompson says. “This allows for more time on location, larger volumes of material to be removed at a time, increased safety and convenient operation through improved controls and functions.” Owning his own business was always a thought, but it was put into motion after Thompson’s son was diagnosed with Type 1 diabetes and was flown to Vancouver for treatment. That was the eye opener and impetus for Thompson to begin down the road of entrepreneurship.

An opportunity presented itself in 2011 and Done-Rite Daylighting Oilfield Services began as a sole proprietorship and was based on a work arrangement with a private investor who had a business with existing clients that needed help. At that time, Thompson recalls, he was not in a position to buy his own truck outright, but the agreement allowed him to become the owner of his first piece of iron, a Westech hydro excavator.

“They offered me the deal of a lifetime. It was an opportunity to get into a truck that I did not have a means to own at the time and it allowed me to do something I always wanted to do,” he says. “In 2011, it [our deal] was written down on a napkin and closed with a handshake.”

In 2013, Done-Rite Daylighting became a limited company and Thompson and his family struck out on their own in Fort St. John, British Columbia. Much of the company’s work is in northeastern British Columbia, but he has traveled from central British Columbia to western Alberta for customers.

“In the first few years it was tight, but I did the leg work in getting agreements with the oil companies and the business began rolling down the road,” Thompson says. “After a few years we had enough money in the bank and I was able to build my own unit, which was delivered in 2015. Then the oil industry tanked, it just died.”

But what Thompson saw happen was a power shift from the larger hydro excavation companies, with their large fleets and many employees, to smaller “mom and pop” outfits like his. He attributes this to the specialized, and more personalized, services that these companies could provide throughout the oil patch.

“I had history with these companies and they knew how much we could produce each day. They knew who was coming to work on their project, which they appreciate for planning,” Thompson says. “These relations, our municipal contracts and our specialty work for the industrial sector, got us through the drop and now the oil industry is starting to pick up a bit.”

As a matter of fact, two of Done-Rite’s Westech hydro excavators spent nearly seven months on a job that ended in May. The steady work through the oil industry downturn and some savings on his part allowed Thompson to spec out his third truck, which was delivered in spring of this year. Much like his clients, Thompson is loyal and knows good equipment when he sees it. Each truck is manufactured by Westech, the most recent being a Westech Wolf. The first is built on the Western Star chassis and the two newer trucks, that he spec’d out himself, are built on Peterbilt chassis and designed to look like old school 60s-era trucks with a grey primer paintjob, single round headlights and black where most of the chrome would be.

Thompson has witnessed first-hand that the Westech trucks, even his 2003 model — the first 10-in. Westech hydro excavator off the line — can go head-to-head with newer trucks. He attributes this to the quality of the equipment and the quality of his employees.

“We have eight employees and they are all hand-picked. I’ve trained them on the trucks and explain what I expect from my team through leadership. Showing what I expect of them rather telling them,” Thompson says. “I believe in having one team per truck. If you take care of the truck, it takes care of you.” Thompson operates the newest Peterbilt, his son operates the 2015 truck and a third crew, which Thompson refers to as being “like family,” operates the third.

From the medical emergency with his son, which turned Thompson in the right direction, to today supporting three families, Done-Rite Daylighting operates on an old farmers’ proverb of “Make hay while the sun shines.”

“We plan on the dark dies and plan for the off seasons and slow times. We try to make as much money as we can, as time allows so when the industry does slow down we don’t lose trucks or employees,” Thompson says.” As I said, they are like family. They put out for us, they work hard for us. Even when we are slow, we guarantee our employees money so they have a stable life and a stable income. Our quality is there because we take care of ourselves, our employees and our community.”