Moncton — population 70,000 — is a Canadian city located in the geographic center of the Maritime Provinces. For this reason and because it has historically been a center of shipping and rail, it’s known as “Hub City” and has a notably strong economy.

Consequently, Moncton has grown fast at times, and its infrastructure has had to grow fast too — wastewater management, for example, is pressured.

“We’re part of a tri-city region, and our wastewater collection systems are struggling to keep up,” says Darryl Bonhower, P.Eng., Moncton project engineer for sewer systems. “Anything we can do to ease that pressure translates into significant current and future savings for Moncton.”

Bonhower is especially concerned about storm water inflow and infiltration (I/I), the undesired water inputs into sanitary sewers that can overload treatment plants, cause sanitary sewer overflows, and raise electric usage during storm events. When city staff analyzed the problem, it found that off road manholes, in particular, were a problem.

“A lot of our rural and off road sewers feature manholes that are built below grade,” Bonhower says. “And during storms, when water pools above the manholes, inflow can be dramatic.”

In winter, snowmelt is also a problem. “The extraneous flows were really ‘robbing’ our system of flow capacity,” he says.

Intuitively, this seems strange. Typically there are two or four 25-mm (0.98-in.) holes per lid, to facilitate removal with picks. But even small holes let in surprising amounts of water (see below for these measurements). And there are problems below the lid, as well. Some of Moncton’s sewers date back to 1895, with some systems made of vitrified clay or brick. “Maybe 50 percent of our manholes fall into the ‘old’ category,” says Bonhower.

Even newer concrete manholes have issues. The concrete systems have numerous joints, and concrete-to-iron sealants have limited life expectancy. So extraneous water often flows into the system between concrete cover and the iron frame and in other ways.

It all adds up to a lot of unwanted wastewater. After analysis, Moncton staff produced a paper on the subject, titled, “Surface Water Inflow through Manhole Lift/Vent Holes into Sanitary Sewer Systems.” Note these conclusions:

Extraneous inflows of 1.2 L/s to 2L/s per manhole cover may not seem significant; however, such inflows may have a grave impact on the performance of a sanitary sewer system. A typical 200-mm (7.9-in.) diameter PVC sanitary sewer running at a minimum grade of 0.5 percent has a full flow capacity of approximately 30 L/s (475.5 gpm). If 10 leaking sanitary manhole covers were present in the system, approximately one-third to two-thirds of the sanitary sewer capacity would be lost due to inflow through the manholes.


A Problem and an Opportunity

Losing this much sewer capacity was a problem, of course, but determining the source of so much I/I was also a tremendous opportunity. If Moncton could find a way to dramatically reduce water leaking in through manholes, construction or expansion of wastewater collection systems could be deferred for years, maybe decades. And fortunately, surface inflow is easier and cheaper to mitigate than subsurface infiltration through pipe joint and crack leaks. Some studies have concluded that eliminating I/I at manholes can, over the life of the project, reduce inflow for as little as $0.01 cent per gallon. Compared to the figures cited for sewer replacement or rehabilitation (up to hundreds of dollars per gallon) this is an extremely small number. The paper cited above concludes: 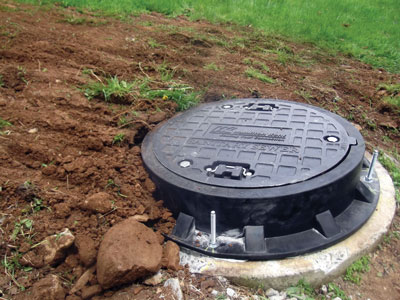 The locking Lifespan lids, whether steel or composite, are watertight, since the pick holes are indented in the lid, and installed with stainless steel fasteners.

Recognizing that when inflow occurs on the surface, it is easier to both detect and to correct. Sanitary sewer system designers and operators that are plagued with inflow and infiltration problems may address inflow problem by installing watertight frames and covers on the sanitary sewer system in areas that are prone to surface water inflow.
With this determination made, Moncton’s sewer system operators formulated an asset management plan for manholes based on two technologies: conventional epoxy coatings to repair subsurface leaks, and the Lifespan System from Hamilton Kent, a watertight, corrosion-proof, non-conductive, locking rubber manhole frame and cover system that prevents rain-derived inflow from entering sanitary sewers through the top of the manhole.

Epoxy coatings work well in some situations, particularly when the manhole being rehabilitated is in good shape, structurally, with leaks confined mainly to joints.

“Some of the newer, spray-on epoxy systems have worked really well for us,” Bonhower says. But by itself, an epoxy-based rehabilitation program couldn’t enable the significant reductions Moncton was hoping for because epoxy doesn’t address the biggest source of unwanted inflow: surface flow through manhole covers. After research, Moncton also decided to implement the Lifespan System from Hamilton Kent.

“We became aware of it in 2011 and from the description it sounded like a good product for us,” says Bonhower. “In 2012, we installed just a couple, to test them out, and in 2013, we have installed about 15. Going forward, Lifespan has proved itself and we expect to be installing them annually, as manholes need rehabilitation.”

Hamilton Kent is a North American firm headquartered in Toronto, and is well known for expertise in subgrade rubber sealing solutions. The Lifespan System draws on this expertise to create a component system that is lightweight, easy to install, seals permanently, and bolts components together with stainless steel fasteners to maintain watertightness indefinitely.

Most of the system’s components are made from a high-performance rubber that the company describes as “almost as hard as a hockey puck.” A chief advantage of this material is its lightness; the Lifespan frame weighs 55 lbs (25 kg), compared to about 100 to 200 lbs (45 to 90 kg) for a comparable cast iron frame. And the tapered adjustment risers weigh just 22 lbs (10 kg) each. This makes manhole frame renewal a simple affair, compared to the use of concrete riser rings .

Once the manhole chimney is excavated and exposed, a one- or two-person crew can set the new frame and lid in less than an hour, using the tapered adjustment risers to match slope in street installations or to raise the lid above the original surface in off road applications.

Since heavy equipment isn’t needed, the system is especially valuable in difficult-to-access situations. All components are bolted together and to the original manhole structure, and all components are sealed together with butyl sealant. The locking Lifespan lids — steel or composite — are watertight, since the pick holes are indented in the lid, rather than going through and through as they do in traditional lids. The result is a permanently watertight installation from the chimney up.

The rubber components perform well in freeze/thaw cycles compared to concrete and iron — they don’t heave, crack, or oxidize and the rubber-to-rubber, butyl-catalyzed seals eliminate joint leaks for decades.

“We’ve put these out to tender this year, and have been receiving bids for $1,500 to $2,000 for the product plus labor,” says Bonhower. “That’s about two times more than what we paid for our self-leveling steel covers.”

The Lifespan System costs more than conventional manhole frames, but Bonhower is certain the system pays for itself.

“It does seem like a lot for a manhole, but realistically, look what we’re avoiding or deferring — sewer renewal at approximately $400 per m, and all the other costs of extraneous sewer flow,” he says. “When you look at the big picture, this system is extremely cost-effective.”

There are additional advantages to using the Lifespan System off road. Prior to implementing the watertight frames and covers, Moncton required that off road sanitary manhole frames and covers were set 450 mm (1.5 ft) above existing ground. This measure reduced surface water inflow into the manhole by placing it well above any potential ponding on the ground surface. This worked, but left unsightly manhole tops in residential neighborhoods, which conflicted with landscaping and were obstacles for lawn mowing.

In addition to the renewal of off road manholes, Moncton is also using the system in particular situations in paved roads.

“Typically, when new streets are constructed in Moncton, the sanitary sewer is located in the middle of the street, high on the crown. This minimizes the likelihood of any storm water runoff entering into the manhole frame and cover,” Bonhower explains. “However, in many instances, sanitary sewer extensions precede curb and gutter installations as development density increases in once rural areas. When an existing street is upgraded with this staged approach, the sanitary sewer is often located within the curb and gutter.”

Since this leaves the manhole lid vulnerable to inflow as storm water runoff collects in gutters, Moncton is using the Lifespan System here, too, eliminating another source of unwanted sewer inflow.

In addition to I/I reduction, Bonhower cites another advantage of watertight frames — odor reduction. Manhole vents in rear yard easements can give off unwanted odors, and Bonhower has found that the Lifespan frames and lids are not only watertight, they’re gas tight as well.

By concentrating on manhole renewal with a modern, watertight system, the Moncton sewer department is not only lowering costs and deferring expensive sewer system renewal, they’re also literally putting themselves in ‘better odor’ with the citizens they serve.


Angus W. Stocking, L.S. is a licensed land surveyor who has been writing about infrastructure since 2002.