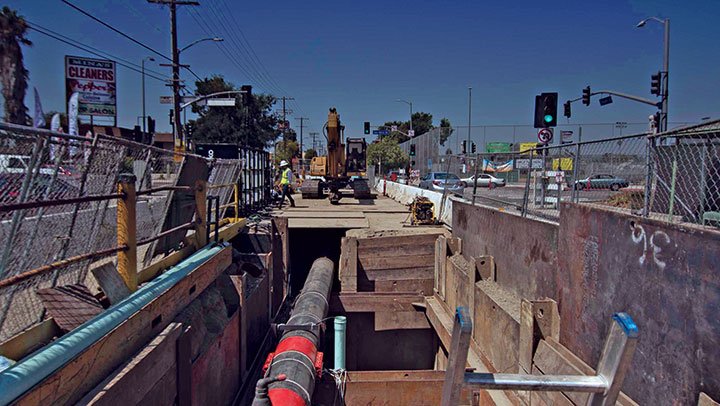 A Pumping First for the Slauson Compton Sewer Rehab Project in L.A.

Every four years, the American Society of Civil Engineers’ (ASCE) Infrastructure Report Card assigns letter grades based on the physical condition of the nation’s infrastructure, and needed investments for improvement. The 2017 ASCE report card rated America’s overall infrastructure with a D+. Drinking water and wastewater treatment infrastructure did no better, earning a D and D+, respectively.

In Los Angeles, about one-fifth of the City’s water pipes were installed before 1931 and it is expected that nearly all will reach the end of their useful lives in the next 15 years. The cost of replacing them is a looming, $1 billion problem for the City. City officials are working to stay ahead of the problem, taking proactive steps to rehabilitate deteriorating sewer pipes, improving sewer flows and reducing maintenance and potential sewer spills. The Department of Public Works in L.A. manages more than 100 sewer design and construction projects throughout the city every year, one of which is the Slauson Compton Sewer Rehabilitation Project, located in South Central Los Angeles.

The sewer rehabilitation project began in 2015, but some months into the project, a temporary pumping system was required to bypass a junction at the busy intersection of Slauson Avenue and Van Ness Avenue. Two main sewage lines are connected to the junction structure — the 42-in. Slauson Compton sewer and the 39-in. Florence Sewer. However, due to space constraints in the area, and the large volumes of traffic using the intersection, a traditional aboveground centrifugal bypass pumping solution — as suggested by a number of competitors — was ruled out. Colich & Sons, which was appointed as contractors of the project by the City, sought the help of global water technology company, Xylem, to design and build a bespoke bypass solution. Colich & Sons had previously worked with Xylem on projects throughout L.A.

According to the flow study conducted by Colich & Sons, the peak flow rate was 15 million gallons per day (MGD) and the daily average flow was 9.35 MGD. The bypass piping would need to be able to handle upward of 150 percent of the anticipated peak flow rate. In addition, the City required a 100 percent redundant pumping system to be installed during the bypass.

“Given the complexity of the project, we wanted a water technology partner that would provide more than just pumps; we wanted expert guidance on the optimum station design complemented by best-in-class technologies to ensure a successful and reliable bypass pumping solution,” explained Colich & Sons owner Donilo Colich.

Following consultation with the contractors and a review of the application spec, the Xylem team recommended and installed an underground pumping solution, the first of its kind for the City of Los Angeles. Two Flygt NS3301 submersible pumps, with patented Adaptive N-technology and renowned clog-free technology, providing up to 15 MGD in primary pump capacity, and an identical backup pumping system was installed to provide 100 percent redundancy in the event of high flows or primary system failure. Two Flygt NS3153 submersible pumps were used to manage an additional 2 MGD anticipated from the 39-in. sewer line.

The biggest challenge facing the project was the design and construction of a suction pit for the bypass system. It was crucial for the Xylem and Colich design team to get the size of the pit exactly right — too small a pit and the pumps would fight each other for flow, too large a pit would create unnecessary cost for the contractor. Due to the space constraints and limited access to the sewer line, the pit was constructed upstream of the junction structure to store and submerge the rental bypass pumps and piping. This sump structure was 35-ft long, 12-ft wide, and 25-ft deep, with discharge approximately 150-ft downstream to a manhole located on the central outfall system. A 12-in. pipe from each pump tied into a common 24-in. pipeline, which in turn, ran into the discharge manhole.

Each pump was fitted with a variable frequency drive (VFD) to control pump revolutions per minute (RPMs), optimizing energy consumption and allowing the pumps to automatically start and stop, maintaining a set level in the wet well. As sewer levels fluctuate, the VFD varies the pump RPM to maintain a consistent sewer level. Godwin’s advanced remote monitoring control panel was also installed. The wireless technology provided remote monitoring and enabled control of the pump from any smartphone, tablet or desktop computer. This remote monitoring system provided an addition layer of security for the city. Two diesel generators were set up to power the pumps, one to power the two submersible pumps and a second one to act as a standby. In the event that the primary generator failed, the standby generator would automatically start and take over supplying primary power to the bypass system. A 2,300-gallon double-contained fuel tank also provided extended running to the generator system. Two Flygt NS3301 submersible pumps and an identical backup pumping system were installed in the event of high flows or primary system failure.

The bypass system successfully pumped more than 4 billion gallons of water over the course of the installation. The combination of reliable primary pumps, supported by backup pumps, a 100 percent redundancy system and remote monitoring and control of the operation provided the peace of mind required by the city managers.

“Having the remote monitoring in place provided us all with an extra level of confidence and peace of mind, which was important on this project, as all of the pumps were underground,” said Erik Patrick, Xylem regional sales manager . “It enabled us to easily check that the system was handling whatever flow rates it experienced from day to day. In addition, our in-depth application experience and expertise ensured that we could recommend the right rental pump for the job — submersibles in this case — and proved to be the most cost effective and efficient option. This, along with our 24/7/365 day service, set us apart from our competitors and ensured that the Slauson Compton sewer bypass was a success.”

“This was an incredibly challenging project as the Slauson Compton sewer is located at a very busy intersection in Los Angeles, and any interference with traffic flows would have resulted in unacceptable delays in the city. Xylem’s submersible bypass system provided the solution that we required without impeding the traffic flow in one of the most congested cities in the world,” said Colich & Sons superintendent Jack Powell.