Nestled through the hillsides and ranchland outside of San Diego, California, Helix Water District’s Aqueduct Two is an important bar-wrapped pipeline servicing a portion of eastern San Diego County. Winches were used to pull the inspection tool through each section of pipe.

After experiencing their most recent leak in 2015, Helix was determined to prevent future failures by embarking on a condition assessment program. But there was one problem: the advanced technologies available for bar-wrapped pipe were relatively unexplored.

“Helix’s approach to large diameter pipe inspections had previously all been by visual interior pipe ‘crawls’ conducted by water district staff,” says Helix Water District engineering manager Tim Ross. “After the most recent pipe failure, we realized that visual inspection was no longer sufficient as a standalone assessment tool, and that we needed a way to assess the condition of the pipe can steel and bar wraps, not just the interior mortar lining to predict future performance of the pipeline.”

The use of high-resolution inspection technologies for pre-stressed concrete cylinder pipe (PCCP), steel and iron pipe has expanded over the last decade through their extensive use around the world. These technologies, both traditional and advanced, have helped identify damaged pipe prior to catastrophic failure and their implementation is well understood, but not for bar-wrapped pipelines. So, in April 2016, Helix advertised a Request for Proposals to help inspect and better understand Aqueduct Two.

The 36-in. diameter pipeline receives water from the San Diego County Water Authority at a Weir Structure near the San Vincente Reservoir, where it flows via gravity for approximately 5.3 miles.

The bar-wrapped steel is most similar to AWWA C303, with the thickness of the steel canister fluctuating dependent on the head pressure present in various sections. Steel cylinder thickness ranges from 0.143-inch thick to 0.231-inch thick. The wire thickness and pitch is consistent throughout, with 11-gauge wire at a one-inch pitch.

Helix scheduled a shutdown for January 2017 to facilitate any inspection efforts. The pipeline would be dewatered and access provided at pre-existing valve and blow-off vaults. Responding companies were asked to perform a comprehensive nondestructive inspection of the entire pipeline and identify the location and magnitude of any defects.

Helix evaluated vendors primarily across three metrics: the technological approach and the information provided; the impact and logistics of deploying the technology; and finally cost.

PICA Corp. was one of the responding companies. PICA’s proposed approach focused on pulling an electromagnetic tool through contiguous portions of pipe, averaging almost 2,200 ft per section. The tool would assess the condition of the steel cylinder, vs. measuring the extent of any wire breaks. Unlike PCCP, where the primary failure concern is damage to the pre-stressed wires, the integrity of bar-wrapped pipe is more evenly shared between the cylinder and the bars. A cross-section of the material composition of the Helix pipe identifies between 90 to 95 percent of the metal presence found in the steel cylinder, vs. 5 to 10 percent found in the wires.

“When assessing the best condition assessment approach, choosing PICA came down to their technology’s ability to provide accurate, reproducible, and timely data,” says Ross. “The confidence level with which the data was reported provided the ability to pinpoint our highest potential failure points and minimize our overall rehabilitation costs.”

Between the award of contract in summer 2016 and the fieldwork beginning in January 2017, two tasks were completed. First, PICA would modify its an electromagnetic tool so that it could collapse through an 18-in. manhole and be rebuilt inside of a 36-in. pipe. Second, project management meetings were conducted regularly. PICA sub-contracted InfrastructureMD to facilitate the local coordination efforts. 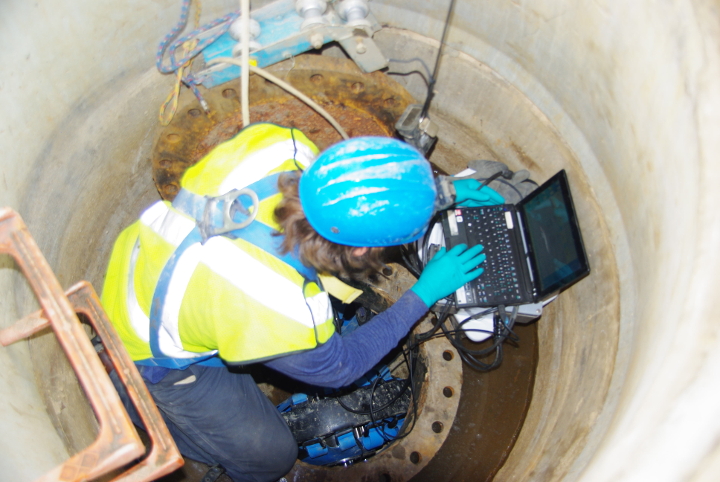 Data analysts were on-site to identify ‘areas of imminent failure’ within 48 hours of inspection.

The coordination meetings identified critical tasks to be completed prior to the inspection. Access locations were confirmed for fitness, rental equipment was secured and it was established that Helix would also perform a visual inspection of the interior of the pipeline.

Fieldwork commenced on Monday January 23, 2017, with crews inserting the inspection tool into the pipeline at a blowoff vault. Over the course of the next 11 days, PICA and Helix inspected 16 sections of pipe, totaling 29,894 ft. One critical deliverable from PICA was providing inspection data within 4 -hours of each inspection identifying any ‘imminent failures.’ By locating high-risk areas, Helix would be able to perform rehabilitation work while the pipeline was already dewatered and out of service.

Overall, Aqueduct Two was in very good condition; however PICA identified several sections that would benefit from immediate rehabilitation. Helix and PICA personnel entered the pipeline and mobilized to several of these locations to verify the inspection data. Cement mortar was chipped away and ultrasonic probes were used to document the changes in steel cylinder wall thickness.

According to Ross, “When analyzing the data, Helix staff established baseline criteria for actionable (when we would physically excavate and inspect) levels of pipe wall loss and the associated confidence level,” says Ross. “All pipe anomalies showing greater than 50 percent wall loss or greater and a moderate or higher confidence level were physically inspected for verification by entering the pipe, chipping away the interior mortar lining and using a handheld ultrasonic thickness gauge for data validation. Once we confirmed that PICAs data was accurate, we relied on their data to prepare drawings and specifications for the cost-effective rehabilitation of this critical raw water pipeline, saving the district and its ratepayers tens of millions of dollars in asset replacement costs.” With the inspection data verified, Helix extended the shutdown of the pipeline to address these areas and solicited work from a local contractor. A Notice to Proceed was issued on April 19, 2017, to rehabilitate and upgrade portions of the pipeline.

Helix replaced 68 ft of 36-in. bar-wrapped pipe and made seven internal repairs with steel patches to address local corrosion pits. At the same time, two new access manholes were installed, along with a manway upgrade. The inspection and repair work cost Helix $1.2 million, which is approximately 5 percent of the total cost if they were to replace the entire five miles of 36-in. pipe.

Prior to its condition assessment efforts, and like most utilities, Helix was in the position of operating their pipeline unsure of the extent of any corrosion. With Aqueduct Two’s past leak history, Helix would have been justified in conservatively replacing the entire pipeline in the face of future failures. By instead pursuing a comprehensive condition assessment, Helix is now free to operate this asset with the confidence that the bar-wrapped pipe will perform for years to come.