A Look at Water Pollution Control in the Heart of America

After Joey Logano won the Hollywood Casino 400 at Kansas Speedway, Oct. 18, 2020 and clinched his spot in the NASCAR Cup Series (NCS) Championship 4 at Phoenix Raceway, he probably didn’t give any thought to where the spoils from his and his crew’s celebration were headed. But you can bet Kirk Roland and Kevin Swearengin and their crews knew it would be getting there just fine.

Swearengin is the manager of the collection system and Roland is program supervisor for the Water Pollution Control Division for the Unified Government of Wyandotte County, Kansas City, Kansas. The department handles the wastewater and stormwater utilities for the bulk of the county and that includes 800 miles of sanitary and 400 miles of storm water lines. The Sewer Maintenance Division includes 36 field crew team members who handle construction, cleaning and inspection of the system, along with two mapping information system analysts and two administrative support team members.

RELATED: How to Reduce SSOs Through Aggressive Cleaning

“We strive to fulfill the mission of our Public Works Department,” says Brad Phillips, operations superintendent. “To provide the safest, most reliable and efficient public works systems and services through a culture of continuous improvement by developing and recruiting public servants at all levels with bold ideas and selfless character.”

Phillips’ duties include managing the division’s CCTV crews. Jeff Anderson is his operations superintendent counterpart managing the sewer cleaning and combined sewer overflow (CSO) monitoring. Combined, the four men have more than a century’s worth of experience in sewer cleaning, inspection and construction.

While the sewer system is not particularly unique, it does present its challenges with two distinct geographic areas. One has portions that date back more than 100 years and another that is a little more than 20 years old. 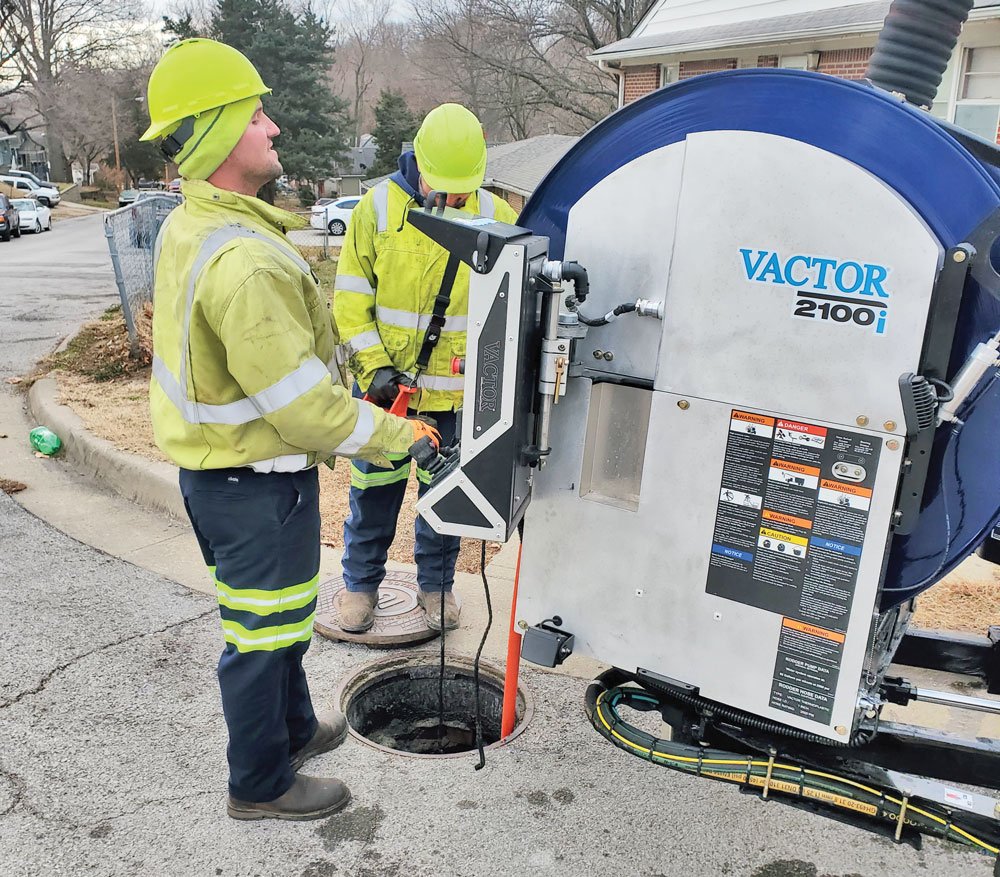 The Water Pollution Control Division’s Vactor trucks are on a 10-year replacement program with a new truck rotating into, and out of, the roster each year.

As the name implies, the governmental entity is a unification of Kansas City, Kansas (KCK), and Wyandotte County. This unification took place in 1997. When it comes to the Water Pollution Control Division, that unification meant the county would adopt KCK’s sewer maintenance best practices.

“The City took over the county’s system. At that time, the county’s maintenance program was sparse. After the unification, as they started developing out toward the western end of Wyandotte County, we [the City] started maintaining anything that was in the ground that the county use to maintain,” says Roland, who will mark 35 years with the Division in April. “The majority of the pipe is vitrified clay pipe, the original KCK system [in the downtown area] has been in the ground well over 100 years. The development toward the west really started in early 2000, so that part of the county is within 20 years old and mostly new construction standards and PVC pipe.”

The catalyst for this growth was the construction of the Kansas Speedway and its opening in 2001. According to a 2008 study by Washington Economics Group, the speedway generates approximately $243 million for the local economy.

Because the western portion of the system is newer and a separated system, Anderson notes that much of the division’s focus is on the older eastern section of the system. It is a combined system and is more prone to blockages and failures due to deteriorated pipe, roots and debris. 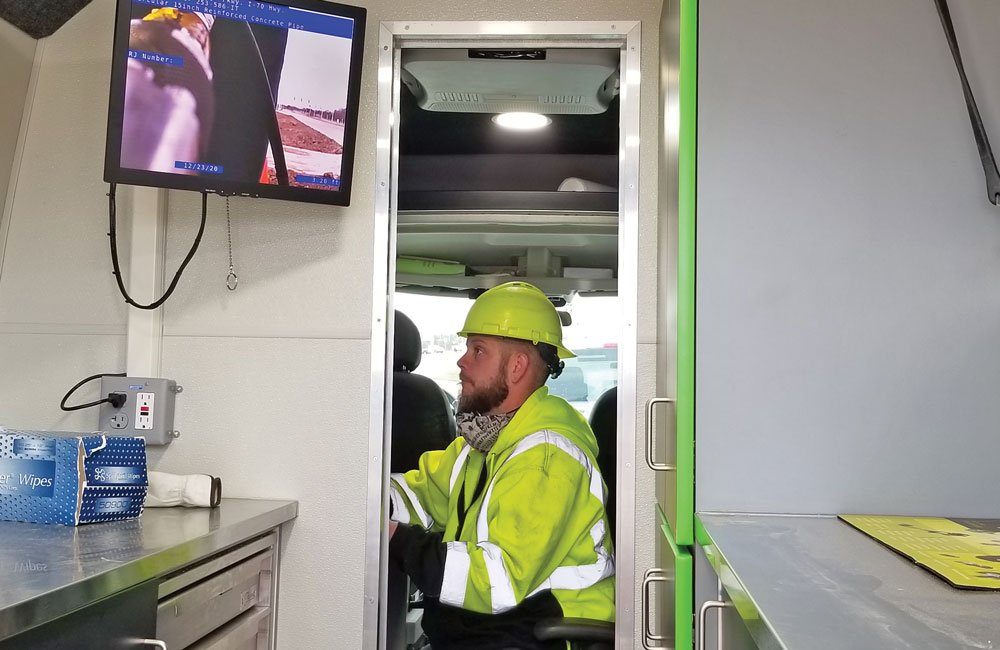 The Water Pollution Control Division’s Envirosight camera trucks are on a five-year replacement schedule. The schedule allows the Division to stay at the forefront of new technologies.

While the City and the County were conducting some sewer maintenance and inspection it wasn’t until the City entered into a Consent Decree with the EPA and began its Capacity, Management, Operations and Maintenance (CMOM) program that it began to aggressively tackle the cleaning and inspection. And then, about a decade ago, the Division started its preventative maintenance (PM) program to track the work.

“Developing the asset management software really upped our game in tracking our history and creating our programs, keeping records and mapping our assets. We use Lucity in conjunction with our ESRI GIS software for all of our asset management and mapping,” says Roland. “With this new system we can make a lot more decisions that are data-driven by looking back at the history.

Anderson adds, “We went from manual tracking on paper to electronic. Every team member has a tablet or a computer, they can access the system and see everything going on real-time.”

Capturing quality data is key to making this program work but capturing the best data on the status of a sewer requires that it be cleaned. To that end, the Division relies on its fleet of nine Vactor 2100i combination units and two Vactor Ramjet flusher trucks. Collecting the visual data from the cleaned lines comes via one of three Envirosight CCTV trucks or the Division’s UTV-mounted Envirosight system.

“We have 32 watersheds throughout our county. A crew is assigned a sub-catchment area and is responsible for working through the area cleaning and inspecting the storm and sanitary lines within that basin,” says Phillips. “We have three CCTV inspection teams that assess the condition of our collection system. We also have two field members who inspect and monitor our CSOs, SSOs, stormwater inlets, and river outfalls daily. Beyond the scope of our daily duties, we also perform accelerated maintenance for known problem areas for root infiltration and grease accumulation.”

“We pre-clean ahead of the camera trucks. We try to position the cleaning crews throughout the county, so we have coverage to assist other crews and we are not all bunched in one area,” Anderson says. “That spreads us out across the county and gives us a quicker response time if a customer calls. About 80 to 85 percent of our fleet is out daily, though 2020 has been more challenging than others [because of the pandemic].”

Roland notes that in the 1980s through the mid-1990s they operated a smaller fleet with straight flushers and mechanical rodders. In the mid-1990s they switched to a mixed fleet with combination units and in the last 20 years to a single source fleet for both cameras and trucks. The Division replaces one truck a year and the cameras are on a five-year replacement plan.

“We’ve had cameras from many manufacturers. We switched over to Envirosight in 2010 and one of the biggest drivers was that the distributor for Envirosight is based in KCK,” Roland says. “When you have an equipment failure, to be able to run down the street and dr`op the equipment off and have it repaired is a lot more convenient than shipping it off for repairs and having a two-week downtime waiting for the equipment to come back.”

He adds that the same can be said for the Vactor trucks. Not only are the trucks noted for their reliability, but the dealer is also local and can perform repairs that the Unified Government’s fleet maintenance department can’t. The Division also works with the local dealer — Key Equipment & Supply Co. — for training on the equipment.

“In terms of training, historically we have always relied on our vendors, especially on their specific equipment. On the construction side, we bring third party resources in for confined space entry, traffic control, trenching and shoring,” Swearengin says. “The Water Pollution Control Division also created a safety coordinator position, so we are going to start doing some of that training internally.”

Like other system owners across North America, the Division quickly took action to distance its crews with staggered start times, provide proper PPE and hand washing/sanitization stations and tried to keep the same cleaning and inspection crews together as best as possible. While the pandemic threw everyone a curveball in 2020, because the Division is proactive in its cleaning and inspection program, the results were not catastrophic.

“Having a data-driven process, we can focus on the areas with the greatest need, while knowing that we can extend the time between cleaning and inspecting the areas with lesser needs. We can concentrate on those troubled areas with fewer crews out,” says Swearengin.