We went to our team – editorial, marketing, production and conferences – and compiled a list of 25 Things You Don’t Know About Trenchless Technology Magazine.

As always, feel free to share your thoughts on this list, or our previous 25th anniversary lists, by emailing me at mkezdi@benjaminmedia.com.

Those previous lists, in case you missed one, can be found on the Trenchless Technology 25th Anniversary section of the website.

Those who may have visited our offices in the early days might believe that the original Trenchless Technology office was a former car dealership in Peninsula, Ohio. What you may not know is that our first home was 4012 Bridge Avenue in Cleveland, a shared space with GIE Media, whose founder Richard Foster is a close friend of our publisher Bernie Krzys.

Benjamin Media Inc. publishes seven magazines in addition to Trenchless Technology. That takes a total of eight editors, six marketing reps and four production staff. Of those 18 employees, 15 got their start working on Trenchless Technology or its supplements. Check out the links to those publications below.

4) Your No. 1 Trenchless Source In 2016, those 20 issues accounted for 1,316 pages dedicated to spreading the news about this ever-evolving industry and the important role trenchless plays in the world in which we live.

We all know that our publisher Bernie Krzys has visited many spectacular places on behalf of Trenchless Technology and Benjamin Media Inc. Need proof? Check out his favorite travels list from February here. Also on the go was Maura Dugan, advertising account representative, who has moved more than 20 times and lived in four states. We’re glad she settled on Ohio! Trenchless Technology was one of the early adopters of a new technology known as webinars to help expand trenchless education offerings. Looking at our records back to 2006 and factoring in what we have booked for this year, we have hosted 101 webinars.  Check out the webinars page for more information.

Before joining the Trenchless Technology team, associate editor Mike Kezdi worked for the Sun News, a local community newspaper chain in Northeast Ohio. At the paper, Mike got his first taste of writing about infrastructure improvements. One of his beats was Brecksville, which coincidentally is home to Trenchless Technology’s global headquarters.

Do you want to win a bar bet at the next trenchless conference you attend? Ask someone how many Trenchless Technology Person of the Year Awards recipients there have been since we started the award in 1992. While 2017 was the 25th year we presented the award, our 2017 recipient Jim Rankin was actually the 26th winner. How can that be? In 1998, we had two recipients, John Jurgens and Dave Gellings of Trenchless Resources international. We have a number of bike enthusiasts at BMI but only one who pedals to work. Trenchless Technology editor Jim Rush, in the snazzy high-vis green shirt in the photo above, longs for the warmer weather to arrive in Northeast Ohio so he can eschew driving his car to work opting instead for his bike.

While the photos we take and the photos we receive for the magazine look great on a smart phone, camera or computer, they are not quite ready for print. After we submit our photos to production the images go through a transformation from RGB to CMYK color modes and from 72 DPI (that’s dots per inch) to 300 DPI so the images can look awesome in print.

Though advertising account representative Hannah Schiffman is a valuable asset on the sales and marketing side of the business, she actually started in the publishing industry as a newspaper reporter. Her first published article was a news brief about children reportedly huffing cow pies with straws to get a buzz behind a local school. Do you still have a clip of that story, Hannah? Managing editor Sharon Bueno is known in the industry for a few things, beyond writing and covering all things trenchless: Sugar, Diet Coke, Youngstown State and the New York Mets. But what you may not know is her HUGE fandom of Elvis (see her Elvis Week photo above) and lifelong love of Donny Osmond. And Huey Lewis rates pretty high with her, too (per her autographed Huey Lewis caricature in her office).

14) Active in the Industry

We like to get involved in the trenchless industry and a few of us serve on industry boards. For example, Dan Sisko, advertising account manager/brand ambassador Trenchless Technology, recently served as the Chairman of the Government Relations Committee with NASSCO from February 2015 to February 2017. When he is not busy working on Water Finance & Management or pulling together our Top 50 Trenchless Design Firms survey, associate editor Andrew Farr likes jamming on his guitar. Trenchless industry folks heading to WEFTEC 2017 can catch Andrew on stage at the annual Jammin’4Water jam session Sept. 30. More info on this rockin’ fundraiser can be found here.

In all, the Trenchless Technology team – editorial, advertising, production and conferences – has a combined 185 years of experience in the trenchless industry. Dan Sisko is well known in the trenchless industry for his dapper attire at trenchless events. What you may not know about him is his addiction to the Fast and Furious movie franchise. Count the movie posters up and you’ll see he has them all in his office (minus the latest installment —“The Fate of the Furious” which is waiting to be hung).

The growth of our magazine and the growth of the North American Society for Trenchless Technology and its annual No-Dig Show have traveled the same path. It’s no wonder, as the 2017 event in Washington, D.C., marked our 17th year working with NASTT on the must-attend event.

21) Foundation in the News

Editors Jim Rush and Sharon Bueno came to the industry in 1998 via careers in newspapers. Sharon covered city and county government in Columbiana County, Ohio, for eight years at the Salem News and Jim was a staff writer and sports writer for papers in Annapolis, Maryland; Goldsboro, North Carolina; and Lorain, Ohio. Since 1999 and the launch of NICHEWEB and trenchlessonline.com – now trenchlesstechnology.com – we have had a robust online presence. As the medium evolved, so too did our participation and page visits – now at 15,000 monthly online interactions. We’ve also added Twitter – @TrenchlessTech – and most recently we’ve rejoined the Facebook world – be sure to Like Trenchless Technology. FYI we’re revealing the 2017 Project of the Year winners on World Trenchless Day Sept. 28 and the announcement will be made via Facebook Live.

Trenchless Technology is a family company and perhaps into its third generation. Bernie’s son Rob Krzys has been with the company almost the entire 25 years and is now president of Benjamin Media Inc., Bernie’s brother Dick (who retired in 2007) was with the company for many years focusing on audience development, conferences and production. To this day, people still inquire about Dick at trenchless shows. And now we might be into our third generation as Bernie’s granddaughter (and Rob’s daughter) Meghan is now working in web and audience development.

When the clouds part and the sun shines, Bernie travels to work in style in his 2000 BMW Z3. Bernie says he fell in love with the car perhaps because he saw it featured in the 1995 James Bond movie “Goldeneye.” But this wasn’t his only two-seat drop top. Before purchasing the BMW, Bernie drove a 1979 MGB. Both cars were red…Trenchless Technology’s colors.

25) Thanks for the Memories 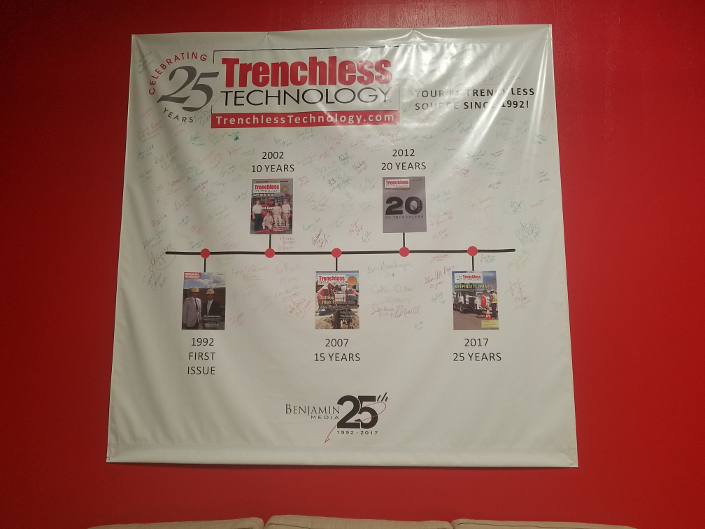 At the 2017 NASTT No-Dig Show in Washington, D.C., the main draw at our booth was our 25th anniversary banner, which we asked everyone to sign. We could have rolled it up and left it on a warehouse shelf, but instead we have it proudly displayed in one of our meeting areas as a constant reminder to the friendships we’ve made in the last 25 years. Thanks for the memories and cheers to the next 25 years!