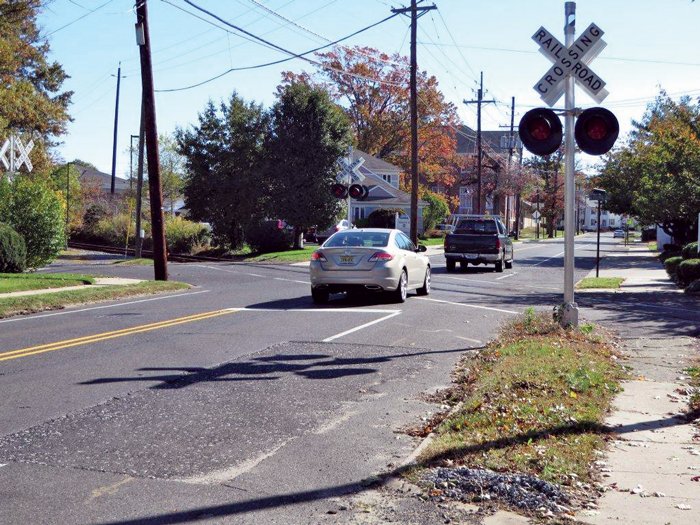 Published by By Sharon M. Bueno November 13, 2014 View Profile
Public Service Electric & Gas (PSE&G) in New Jersey had a problem on its hands, specifically a leaking 6-in. gas main. PSE&G distribution technology manager George Ragula has seen his share of complicated and unusual rehab projects over the years but the one in Moorestown, N.J., was unique even by his standards.

Rehabbing a leaking gas main — how difficult could that be? This project necessitated a thinking-outside-the-box approach, resulting in a blending of trenchless technologies to get the job done.

The leaking main was located within a railroad right of way, just approaching the City of Moorestown. The low-pressure, cast iron main was installed during the 1930s and had been leaking for a while, causing odor complaints. PSEG would follow up on the complaints to make sure the area as safe while at the same time trying to determine how to best correct the problem.

“Cast iron is a really good material; however, leaking cast iron joints are very common because the jutes dry out over time,” Ragula says. “The issue with this [particular] pipe was with the joint leak and those joints were every 12 ft.
“The main had been leaking for a while but the local distribution team really didn’t know how to handle it because there was a drip pot on it, as well as a three-way tee, both of which were located within the railroad right of way,” Ragula says.

PSEG wanted a solution that was the least invasive to the area and in dealing with the railroad company. “Normally, we would have excavated over the tee and cut the 4-in. diameter cast-iron leg off but that was impossible to do without lengthy and costly railroad permits, engineered drawings, inspectors, etc.,” Ragula says. “It also contained a drip pot on the 6-in. side within the railroad right of way that needed to be bridged.”

Horizontal directional drilling (HDD) to install a new main was considered but that option would have still needed railroad permits/approval because crews would have drilled under live tracks. HDD would have also required installation of casing but gas utilities do not like inserting carrier pipes inside casing because they are difficult to cathodically protect, Ragula says.

“The best way to approach this job was trenchless rehabilitation and right away we thought of [cured-in-place (CIP)] liner renewal,” he says. “In a sense, the existing pipe acts like a casing pipe and the railroad would leave us totally alone. It’s a very common rehab technique we use on railroad crossings.” This shows a cross-section of the 6×4 tee during lab testing at Progressive pipeline Management, showing the adjoining overlap.

Dealing with a drip pot issue was not new for Ragula. In 2011, he, Progressive Pipeline Management (PPM) and PipeMedic worked on a project that required a drip pot bridge be created so that a 16-in., 700-ft section of high-pressure, cast-iron as main could be rehabbed. Their efforts were recognized with the Trenchless Technology Project of the Year for Rehabilitation that year. PPM was also the contractor on the Moorestown project and lining an unexcavated tee would be a first for them. “Lining through an unexcavated tee solves many problematic issues,” PPM president David Wickersham, noting specifically logistical limitations and the cost of constructing an excavation pit. “This is a very unique solution to a common problem and all the while saving the utility money.”

The drip pot was on the eastern end of the 6-in. diameter pipe and PPM would need to remove it and bridge that section by installing a structural reinforcement sleeve, enabling the main to be lined through. On the western side of the main, a process was needed for lining the three-way inlined tee — 175 ft through the 6-in. leg and 100 ft through the 4-in. bull.

For the drip pot and tee aspects, Ragula reached out to a couple trenchless companies rich in trenchless experience for help. He again teamed with Ehsani and PipeMedic to develop a specially designed carbon fiber sleeve to be used as the bridge, this time for a small diameter, low-pressure pipe.

Ragula also contacted Larry Kiest Jr. of LMK Enterprises, which specializes in mainline and lateral connection lining for gravity sewers, about the three-way tee — he wanted a reinforcement liner to seal over the overlapped seam at the junction point of the two different diameter lines in the tee. Kiest says the project intrigued him and took the project particulars to the LMK lab to see what could be developed.

“Our forte is forming a seal at an intersection at the main and branch pipe,” says Kiest. “It was a different deal because of the gas and pressure pipe, as our focus is gravity sewer.”

Ragula sent Kiest a section of 6-in. pipe lined with the Starline liner to simulate site conditions at the LMK lab. Kiest’s team made modifications to its T-Liner technology to make sure the liner wasn’t permeable to gas and worked with different resins and installation pressures to ensure it would work. “We performed multiple leakage tests on it and came up with a really good solution,” Kiest says.

PPM also had a challenge of creating the tooling and robotics needed to reinstate the lateral, as this was the first time the contractor had ever lined through an unexcavated tee. This shows a cross-section of the modified T-Liner installed during lab testing at LMK. this is the 6 x 4 Tee after the overlap was sealed over.

Everything was ready to go. Weather was somewhat of an issue that affected curing time — the work was done in the middle of January. The PPM crew would first line the 100-ft long 4-in. diameter segment into the backside of the 6-in. pipe. After curing, the crew cut out the blunt end to open the 6-in. side, using a specially designed robotic lateral cutter. Then, the packer pig and robotic cutter was sent back in through the eastern end of the 6-in. pipe to remove the drip standpipe and install the carbon fiber bridge, allowing the 175 ft of 6-in. pipe to be lined and sealing off the 4-in. pipe. Once that cured, the crew robotically reopened the 4-in. outlet, successfully overlapping the 4-in. and 6-in. liners at the outlet of the bull of tee.

It was time to use LMK’s specially designed T-Liner to seal over the overlapped seam at the junction point of the two different diameter liners in the tee. However, the field conditions of the main differed than what was expected.

“When we installed the structural reinforcement sleeve, it did not fully open to the ID of the pipe because the cast-iron main’s joints were cocked to gain depth to create a low point for the drip pot,” Ragula explains. “Because it could not open to its full ID, we could not successfully get through the robot and packer pig that the LMK reinforcement fitting needed. We had to just go with the overlap of the seam. We pressure tested it in the laboratory to make sure it would hold as part of our prep work for the project and it held.”
Though unable to use LMK’s T-Liner for this project, Ragula and Kiest know the technology and the concept will work down the road — and that is the takeaway from this project, they say.

Trenchless Experience
Ragula credits his 25-plus years of involvement in the trenchless industry and relationships he has formed over the years in solving this rehab main dilemma. He notes that he was familiar with LMK’s T-Liner from all the demos he had seen at various shows and knowing Kiest. With PipeMedic, he was introduced to the technology at a Trenchless Technology Rehab Roadshow in Newark, N.J.

“By just being involved you become aware of these things and they become information tools you can use when you get involved with specific issue within [the gas] industry,” he says.