Georges Dorval’s group of backcountry skiers prepare to climb a mountain along the Haute Route this past march. The Alpine route is one of the most coveted backcountry ski tours in the world.

Georges Dorval, P. Eng., marketing and business development, AquaRehab, is one of those people. The combination of both activities into one endurance activity is known as backcountry skiing. As the name suggest, backcountry skiers take their hobby off the beaten path and not on nicely manicured, sanctioned slopes. The sport — well known in Europe for more than 75 years — is gaining popularity in North America.

Dorval, a Quebec native, started downhill skiing at 16 and began taking annual two-week ski trips to Europe in 1975. It was during one of those trips that he started giving serious thought to adding backcountry skiing to his resume and 12 years ago, he brought his first set of gear to Quebec.

“I thought I might love that. It’s like trekking, so I decided to buy the equipment and try it,” Dorval says. His friends started to take notice and soon Dorval had several backcountry skiing companions, including his wife Claude. “We formed, slowly but surely, as a group, so in my home place it is more popular and growing every year,” Dorval says. 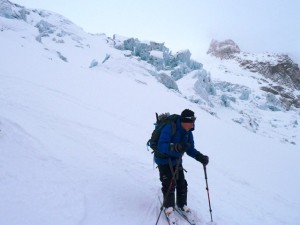 About 12 years ago, Georges Dorval bought his first set of backcountry ski gear. His passion for the sport quickly spread to his wife Claude and other skiing companions in Canada.

Skiing with a Twist

Backcountry skiing requires the endurance of cross-country skiing for climbing and the abilities of downhill skiing to meet all of the snow conditions and the varying degrees of a ski run. Dorval referred to it as winter trekking, giving the participants access to a mountain’s remote areas and the possibility to downhill ski in unmanned spaces.

“I find, in backcountry skiing, lessons that you can easily transfer to your professional life,” the soon-to-be 65-year-old says. “Backcountry skiing in remote areas always involves risks that need to be assessed and addressed, (similar to what) I see on AquaRehab construction sites.”

The skis are similar to downhill skis, with the addition of specific bindings that allow bending and non-bending of feet fronts with an unlock position for climbing and lock position for downhill skiing. Also, when climbing, backcountry skiers install synthetic seal skins under the ski to prevent a skier from sliding backward while retaining the ability to move forward up the mountain.

Clothing is similar to other ski adventures but participants need to bear in mind that they will be climbing and skiing in one trip. What works for an inbound downhill ski trip is not always ideal for backcountry skiing. Dorval recommends dressing in layers that allow for easy changeovers from blizzard conditions to summer-like sunny days.

Given the extreme nature of the sport — heading to uncharted territory — the most important part of the gear, Dorval says, are the safety and rescue equipment, ARVA transmitter (beacon), harness, ropes, ice axe (piolet) and crampons. Advances in clothing and equipment have led to the growing popularity of backcountry skiing, he says. Georges Dorval and his wife Claude on the Haute Route ski trip in March 2015.

Most of Dorval’s trips are to remote areas of Quebec with trips lasting about three days. The skiers stay at a central shelter and trek out for day of backcountry skiing and return in the evening. Dorval says the best place to backcountry ski on the eastern side of Canada is the Chic Choc Mountains, found in the centre of the Gaspé Peninsula in Eastern Quebec. He has yet to make a trip to the western side of the country for a backcountry adventure.

“Backcountry skiing can be done all winter long where there is low risk, normally in lower height mountains and less steep areas,” Dorval says. “The peak season for heading for high and remote mountains is from mid-March to mid-June in order to minimize the risks of avalanche, unnoticed cracks in glaciers and snow heavy storms.”

There are places throughout Canada and the United States for backcountry skiing, but Europe is the place to go, with mapped areas and guides.

“I think that a lot of places are good if you know the right spots. It depends more or less on your tolerance of risk, your endurance and your resilience in adverse conditions,” Dorval says. “The backcountry skiing has a very long history and is so very well developed in Europe. The sport is fairly new in Canada and the United States. However, it means that for the few folks who are prepared to take higher risks, you can experience real new challenges in west of Canada and the United States.” One of the ultimate European trips, the Haute Route (High Route), is on the top of most backcountry skiers’ bucket lists. After talking about it for several years, Dorval, Claude, and a group of his friends from Canada and Switzerland – 12 in all and two guides – made the “mythical skiing journey” in March.

“The journey is for seven days, climbing 8,000 m, 95 km and seven to eight hours per day of riding,” Dorval explains. Haute Route stretches, from Chamonix in France, home of Mont Blanc, to Zermatt, home of the Matterhorn, in Switzerland and rest is made in cabanes (rustic mountain chalets) at 2,900-3,200 m. The chalets offer a place to rest and refresh, but other than the kitchen area features no heat and, there is no running water.

What are Dorval’s plans now that the mythical journey is complete? He has some ideas in mind.

“As the Haute Route is done now, one other dream would be to backcountry ski in Norway with our Swiss guides,” Dorval says. “I recently saw a television report about Alaska, which created big interest for me.”

Also on the agenda is exploring backcountry skiing in western Canada and the United States. “I expect that in the future as the sport will become more popular, maps, routes, guides, shelters and permanent rescue organizations will become available in the west of North America,” he says.
As for other extreme skiing adventures, Dorval hopes to try heli-skiing the deep powder in the western provinces. For all of these, he hopes his Swiss friends will be part of the experience.

Continued skiing in Quebec is also on top of that list because, in 1976, he purchased a cottage at the Mont-Sainte-Anne ski resort in the town of St-Férréol-les-Neiges, Quebec. The cottage is where he plans to retire.
Mike Kezdi is assistant editor for Trenchless Technology Canada.
Most Popular Posts