Subsurface Utility Engineering (SUE) — the term has come a long way since first introduced in Canada back around 2002.

The adoption of this practice has set a high but attainable bar for the collection and depiction of existing utilities. This was the goal — achieve a common standard that could be followed regardless of state and provincial boundaries. The initial steps were taken by the American Society of Civil Engineers (ASCE) and Construction Institute (CI) by creating CI/ASCE 38-02 as the basis for where we are today. Further steps were made with the publication of the CSA S250-11 Standard in Canada in 2011.

Every jurisdiction may have its own formatting CAD layers, but the depicted information should be uniform throughout North America. By having quality levels from CI/ASCE 38-02, each utility is placed with its associated quality Level from D to A. By having this common system, engineers throughout North America can plan and execute a project based upon the highest quality of information and mitigate the risk derived from using the ad hoc methods of the past 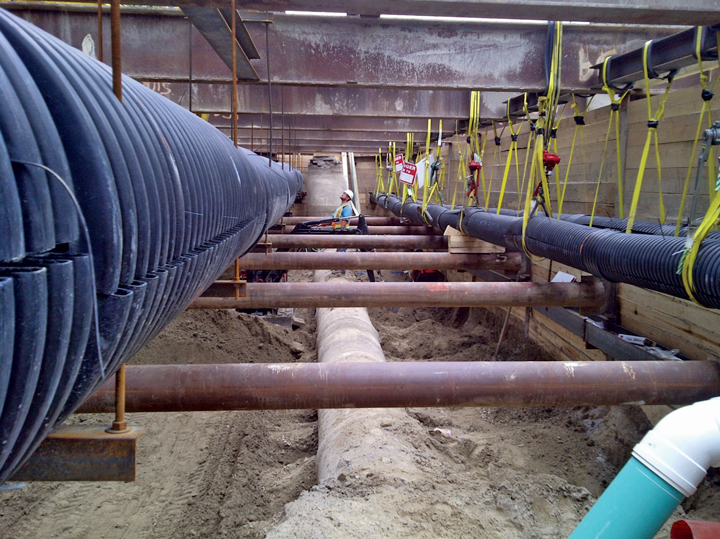 SUE stands for Subsurface Utility Engineering. As it sounds and as defined in CI/ASCE 38-02, SUE is a discipline of engineering dealing with the managing of certain risks associated with utility mapping at appropriate quality levels, utility coordination, utility relocation design and coordination, utility condition assessment, communication of utility data to concerned parties, utility relocation cost estimates, implementation of utility accommodation policies and utility design. SUE is not to be confused with just a locate function that many firms and jurisdictions have mistakenly devolved the practice to be. It should also not be forgotten that SUE is more than just the mapping at appropriate quality levels — There is more to a SUE engineer. 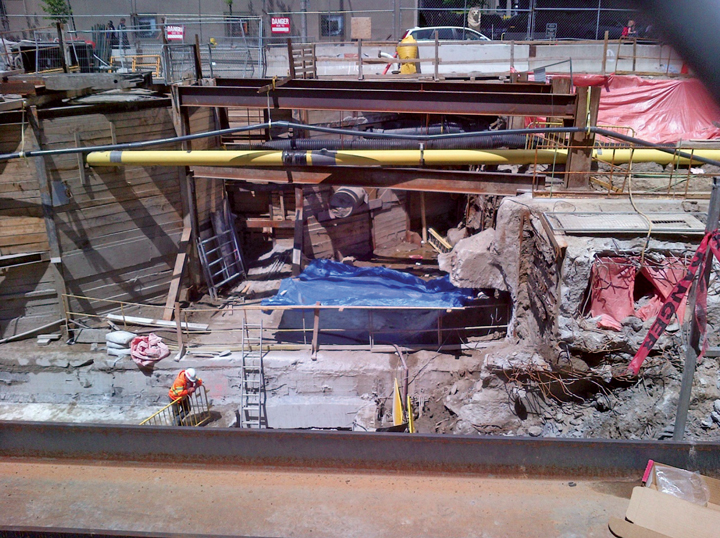 A great sample of a project involving multiple aspects of SUE is the TTC Union Station Expansion project in Toronto, Ontario, Canada, completed by T2 Utility Engineers, a SUE firm based in Whitby, Ontario, Canada. The project is situated on Front Street in downtown Toronto. It involves the expansion of the existing station to accommodate an extra platform and overall expanded capacities. The photo in Figure 1 shows the project under construction, with several of the utilities being supported to facilitate the massive excavation needed to construct the new station.

Due to the complexity of the utility-related issues on the project, a Subsurface Utility Exploration Engineering mapping investigation was completed in accordance with ASCE 38-02. The investigation included a full review of available records information from both the private and public utilities present in the area. A field investigation was then completed consisting of, designating of utility locations using a variety of methods including cable locate equipment, GPR, sondes and CCTV cameras. Sewers inverts and chamber sizes were investigated and reported on the drawing. Vacuum excavation was also used to collect QL-A data at critical locations. As a final product, a stamped and signed SUE report was provided for the project. For those that needed to be supported during construction, T2ue engineers designed support systems that would meet with both the utilities standards and the project team requirements. There were several special circumstances that needed to be addressed including; 115KV buried electrical lines (see figure 2); Toronto Hydro Electrical Manholes, Trunk Sewer mains, and large diameter gas mains (see figure 3).

Those utilities that could not be supported in place needed to be relocated to facilitate construction. T2ue engineers worked with the various utilities and design disciplines to design the relocations. Key relocations included telecommunication structures, large diameter watermains (see figure 4) and distribution gas mains.
Support from the T2ue team continues as the project nears completion. SUE took a prominent role when the project commenced in 2008 continues to play a key role in the construction phase of the project. It is expected that the whole project will be completed on time in 2015, much to the thanks of SUE.

The TTC Union Station project is a great example of how SUE is used to its fullest extent. Although SUE is sometimes just thought of as a process for utility mapping, in reality it is and can be much, much more than that. Utility mapping may be the foundation, but utility coordination, utility condition assessment and utility design are all key aspects. As the discipline of SUE gains familiarity so too will be the overall appreciation of what it includes.