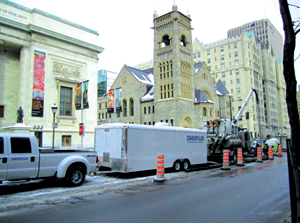 On Feb. 3, 2011, it is around 0 degrees F (-12 C) and with the wind chill factor, the temperature is -6 F (-21 C). While the City of Montreal crews and snow plows are busy moving mounds of snow from the previous day’s snow storms, Dassyloi Inc., is setting up its jobsite to rehabilitate one of the City’s oldest brick manholes that is severely deteriorated and badly in need of repair.

The 22-ft deep vertical sewer structure repair is a part of the City of Montreal contract to rehabilitate 310-m x 1,500-mm (1,066-ft x 60-in. diameter) brick collector sewer that runs underneath Sherbrooke Street West, one of the busiest streets in the downtown area. Sherbrooke West is home to many historic churches, the museum of fine arts, McGill University and hundreds of Montreal’s finest restaurants and stores. The location was on Rue Sherbrooke, a major east/west artery and at 31.3 km (19.4 miles) in length, the second longest street on the Island of Montreal.

The 100-plus-year-old manhole structure was picked for trenchless rehabilitation due to the depth, structural condition and location directly in between the two Montreal Museum of Fine Arts Buildings.

The structure also had a 2-ft x 3-ft brick, egg-shape branch connection approximately half way down the structure, which carries the main sewer traffic from the residential neighborhoods to the north of Sherbrooke Street West.

The general contractor on the project was Garnier Construction Ltd., which was to perform all project management and administrative, duties, road closure and traffic diversion, excavation of access shafts for the mainline lining etc. Veolia Environmental Services was sub-contracted to perform the mainline CIPP.
Dassyloi, a full service water and wastewater, maintenance and specialty trenchless contractor, was approached by Veolia Environmental Services to rehabilitate the manhole structure due to its extensive experience and success with manhole lining using spray applied structural polyurethane technology.

Following an in-depth inspection of the structure, Luc Lefebvre and Andy Sherwin of Dassyloi Inc. determined that it would not be appropriate to use their spray-coating system for this rehabilitation. Lefebvre said, “After surveying the manhole, we concluded, that due to the dimensions of the manhole (26 in by 32 in. oval at the top, and 26 in. by 32 in. horseshoe profile at the bottom) that this was not the correct solution for man-entry, spray-applied technologies, as it would be too tight for the operator to work effectively. We then looked at Spincast, spray-applied products. However, this would prove difficult to build an even liner thickness, in accordance with the engineered design.”

Several other technologies were evaluated for the project, however, with the structure being 22 ft deep, other CIPP liners would have not be suitable due to the amount of resin required for wet-out. Traditional dig-and-replace was not an option due to the structure location, traffic conditions and costs.

“This led us to cured-in-place lining technology and the Poly-Triplex System,” said Lefebvre. “We were extremely impressed with the products physical properties, low environmental impact (VOC free resins) and ease of installation methodology, i.e. small construction and carbon footprint. The Poly-Triplex representatives proved to be very efficient in assisting us with the product approval process, having all of the engineering and design documents that the City required for their evaluation.”

Other considerations were the extreme cold temperatures in Montreal at this time of the year. The steam cure process was paramount to the success of the project at these temperatures.

Having become familiar with the Poly-Triplex system, which has been used extensively throughout the United States and other areas of Canada, Dassyloi Inc. contracted with the manufacturer Poly-Triplex Technologies Inc. to become a certified installer of the system in order to bring this patented-CIP lining technology to the Province of Quebec.

Andy Sherwin commented, “The Poly-Triplex System will be a complementary solution to our already successful manhole rehabilitation operations. We are very much a solutions-based company and believe in offering the right solution for any particular job, rather than what we have available on the shelf at any given time. We are currently working on proposals for both man-entry and non-man-entry culvert rehabilitation, where one product would not work for all sizes. Also, we have several industrial applications where we feel that the quick installation and VOC-free materials will be perfect.”

After the structure was measured for its shape and dimensions, Poly-Triplex Technologies Inc. custom-fabricated the liner to fit the contours of the structure. The custom-designed liner was fitted with an internal inflation bladder to pressurize the liner in place at the jobsite.

Due to the extreme weather conditions anticipated, there was a coordinated effort between Dassyloi Inc. and Poly-Triplex Technologies Inc. for special procedures and installation techniques required for successful installation of the liner.

On the day of installation, the crew began its preparation for the liner. Time was of the essence because of the large lateral coming into the structure, which had to be bypassed during the process of lining. The quicker and more efficiently the structure could be lined, the better for all concerned.

The crew first thoroughly cleaned the structure with a high-velocity pressure cleaner. Missing bricks and mortar were repaired using an early strength gaining repair mortar. Due to the severe weather conditions, the structure was then pre-heated with a forced hot air system to offset the frozen conditions in the top section of the structure. The warming of the interior walls would facilitate a faster curing time for the resin system used on the liner.

The two-part modified Polyamide Bisphenol “A” Epichlorodhydrin epoxy resin system was blended at the jobsite and applied to the Poly-Triplex liner inside a 40-ft long heated box trailer.

Once the liner was thoroughly saturated, the heating element was removed. The liner was attached to an inflation canister, lifted with a raised telescopic boom device and lowered into the manhole. 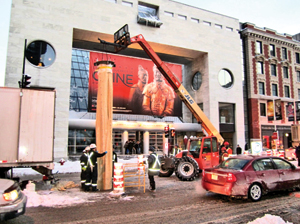 The entire liner assembly was then pressurized to make the liner conform to the structure and then a patented-curing system of air pressure and steam heat was applied to create a convection and steam oven atmosphere of well over 200 F inside the inflation bladder. The curing process took approximately two hours to complete.

Once the liner was cured and allowed to cool down, the canister was removed and the inflation bladder was stripped from the liner. The liner was bonded to the interior surface of the manhole from the ring and cover seat to the bottom of the structure.

Poly-Triplex Technologies Inc. provided a materials warranty to the City of Montreal for a period of 10 years and Dassyloi, Inc. warranted the installation labor for a period of five years.

According to Marietta, Ga., engineering firm Mayes, Sudderth & Etheredge Inc., the liner installed has a design life that should last another 100 years, so this particular manhole may well see its 200th birthday.