“ All Roads Lead to Rome” was the rallying cry for this year’s International No-Dig Show held Sept. 10-12 in Rome.

The Ergife Conference & Exhibition Centre with indoor and outdoor exhibit space was the venue for the event. The show encompassed a large regional audience with attendees exceeding 2,000.

The opening ceremony heard the keynote speakers and politicians urging the government to enforce more control over open cut work. The Italian Director General of Public Works at the Ministry for Infrastructure responded that an announcement of changes and regulations for contracting public works would be made within the next few months that would provide for additional costs where the environmental impact of trenching was unacceptable.

Interestingly, at the Gala Banquet the France Society for Trenchless Technology (FSTT) received a special award for the work that it has done to have French cities sign a special agreement promoting the use of trenchless technology.

There were 40 countries that participated in the 2008 No-Dig Show. This included a special delegation of senior decision-makers from Turkey, Egypt, Algeria, Tunisia, Morocco, Lebanon and Jordan. All of these people showed concerns over drinking water and sewerage treatment matters involving the Mediterranean Sea. This group was invited under the auspices of the Italian Institute of Commerce and were treated to a special full day presentation on trenchless techniques and their cost and environmental benefits.

As is customary at the annual International No-Dig, the ISTT Board of Directors met. Dec Downey was elected as the ISTT chairman; Downey is with Jason Consultants and is from the United Kingdom. He succeeds Menno Henneveld, Commissioner for Roads, Western Australia. Sam Ariaratnam, Arizona State University was elected vice chairman. Derek Choi, Hong Kong, was re-elected and Karel Franczyk, Czech Republic; Olga Martynyuk, Ukraine; and Norman Howell, United Kingdom, were elected to serve on the Executive Sub Committee. The Sub Committee oversees the day-to-day activities of ISTT.

The Gala Banquet took place in a unique countryside setting within the confines of Rome. The annual highly regarded No-Dig Awards were made at the reception proceeding the dinner.
The Project Award was won by Brochier Ltd, Prague, Czech Republic, for The Ostrava Regional Drinking Water Supply – 3rd Feeder. This impressive project involved providing a totally hygienic alternative water supply to allow the cement mortar relining of 22 km of DN 1,600 steel feeder pipe that had suffered from abrasion of the protective lining and corrosion. 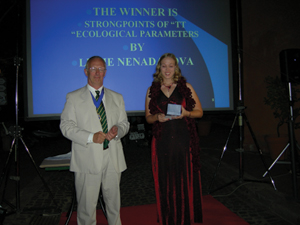 The Product Award was won by Sewer Seal JF, which was the result of a collaborative project between the client Wessex Water; the material supplier De Neef (UK) and the installation specialist SDI-Unistride, all based in the United Kingdom. The Academic Award was won by Dr Hedeki Shimada, Kyushu University, Japan, for his research into soil stability during pipe jacking and the influence of slurries.The Student Award was won by Lucie Nenadalova, Czech Technical University, Prague, who undertook an extension of earlier student work at her university to improve the ecological assessment of trenchless techniques.

Rome with its world renowned sites — the Vatican City, the Coliseum, the Forum, the catacombs, etc.— proved to be a fantastic location for the No-Dig Show. Many of the delegates took the opportunity to bring their spouses or partners to Rome. This combined with the plethora of regional themes through the show and reports on worldwide advances in trenchless technology proved to be an attractive and effective way to have more people participate in the International No-Dig.

In 2008, the International No-Dig visits Moscow for the first time, targeting the Russian Federation and the Commonwealth of Independent States (former Soviet Republics). The conference will be held June 3-6.