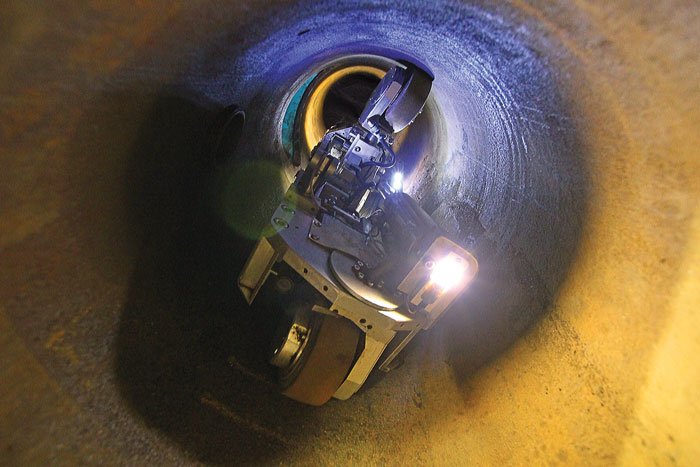 Published by Robert Kodadek February 16, 2016 View Profile
Most gas utilities worldwide are replacing their small diameter cast iron mains with new plastic pipe at monetary and social costs which represent a good value to their customers. Gas distribution companies and regulators also recognize that replacing large diameter cast iron mains is extremely disruptive, cost prohibitive and potentially unnecessary. The suggestion that large diameter cast iron pipe may have decades of safe, useful life remaining stems from the fact that these pipes have very thick walls which are generally resistant to corrosion and fracture, leaving the joints as the single largest point of risk.

In order for gas utilities to determine how their large diameter cast iron assets can remain part of their network they need to address three risk factors — gas leaks at the joints of the mains, stress on the pipe wall and areas of potential corrosion.

How do gas utilities work to eliminate these three points of risk? Robotic technology from ULC Robotics is enabling gas utilities to determine the means in which to address these factors.

ULC Robotics is rolling out the CIRRIS XI (pictured) and the CIRRIS XR robotic systems in 2016. The Technology will help gas utilities extend the life cycle of large diameter cast iron pipes.

CISBOT, the cast iron joint sealing robot from ULC Robotics, unobtrusively renews the bell and spigot joints in straight sections of large diameter cast iron gas mains with minimal excavation, minimal disruption to the public and without the need to interrupt gas service to local residents and businesses.

Operating in 100 percent live gas environments, the CISBOT injects anaerobic sealant into the joints in the gas main, forming a seal that is proven by Cornell University studies to extend the life of the joints by 50 years. The process of joint sealing with CISBOT not only stops gas leaks and proactively prevents gas leaks from forming, but also reduces permit, engineering and reinstatement costs that are often associated with typical repair methods and direct burial replacement.

National Grid was the first utility to deploy CISBOT on a programmatic basis and uses this technology in Boston and New York City as part of their large diameter gas main capital rehabilitation program. Following the CISBOT deployment

by National Grid in the United States, UK-based gas utility SGN worked with ULC Robotics and adopted the robot for use in South London and Scotland.

“We really wanted to transform the way we work in the street,” said SGN network director Paul Denniff. “Innovative solutions such as CISBOT allow us to rehabilitate pipes in a planned way rather than digging on an emergency basis.”

The successful CISBOT operations for National Grid and SGN helped to transform the way both utilities work in the street and proved CISBOT’s ability to address the issue of leaking joints, one of the most prevalent risk factors associated with operating cast iron pipelines.

In the past five years, through constant innovation and improvements of the technology and operation, ULC Robotics has taken CISBOT from a prototype robot into a commercially available alternative to gas main replacement that is revolutionizing the way gas utilities solve difficult operational and environmental challenges, and cut costs to customers.

While CISBOT is able to renew joints to stop and prevent gas leaks, the technology only addresses one of the three risk factors that push utilities to replace their large diameter cast iron gas mains. With the increasing demand to replace pipe, ULC Robotics began to work closely with SGN to focus on how to develop a more complete robotic solution that can address all three risk factors. The Next Generation of Pipeline Robotics

The system is comprised of two separate robots that work in tandem — the CIRRIS XI Inspection Robot and CIRRIS XR Repair Robot — to address all three risk factors. With the development of these robots gas distribution networks are able to take on the challenges of internally assessing cast iron pipelines for wall thickness and stress, and sealing multiple joint types to stop and prevent gas leaks in large diameter cast iron mains.

The CIRRIS XI Inspection Robot internally assesses the condition of cast iron pipelines and collects critical pipeline integrity data using two specialized sensors. The measurement data from these sensors provide key indicators of pipeline integrity and allow network operators to proactively manage their assets. The first sensor technology which was specialized for this application is electro-magnetic acoustic transducers (EMAT) and is used for measuring pipe wall thickness and graphitic corrosion. The second specialized sensor technology deployed for the CIRRIS XI Inspection Robot is Barkhausen Noise sensors which are used to measure stress in the pipe wall. Before now, network operators were unable to obtain this type of data from inside live gas mains, changing the way gas utilities make decisions about their large diameter cast iron assets.

The second robotic system, the CIRRIS XR Repair Robot was designed specifically to repair mechanical joints, bell and spigot joints and failed Weco seals. The repair robot is capable of injecting up to two different sealants or other materials to repair a leaking joint. To access the aging joint seals, the robot uses a redundant set of highly specialized servo controlled drills and injection mechanisms. A trained operator can efficiently and reliably position the robot to precisely inject prescribed amounts of sealant into each pipe joint. The result is a highly repeatable and practical means for gas utilities to eliminate and prevent gas leaks.

“We’re thrilled with the development of CIRRIS XI and CIRRIS XR Robotic System,” said Gus McIntosh, manager of innovation and new technology for SGN. “It’s all part of how SGN is transforming the way they work in the street. SGN wants to develop innovative solutions to repair pipes that are causing issues now and identify others before they cause issues in the future.”

One of the most high profile deployments of CISBOT occurred in May and June of 2015 when the robot was launched under iconic George Street in Edinburgh, Scotland. UK-based gas utility SGN adopted the robot for use in 2013 and began programmatic deployments of the technology in 2014.

By improving upon the success of CISBOT and working closely with gas utility SGN to develop the CIRRIS XI and CIRRIS XR Robotic System, ULC is building the next generation of live gas pipeline robotics. As the robotic technology continues to develop and address the issues of aging large diameter cast iron pipelines, the gas utility industry will see the long-term benefits.

Some of these benefits include:

• Significantly reduces the cost when compared to pipeline replacement and less than other methods of pipeline rehabilitation.

• Reduction and prevention of leakage and gas emissions from multiple types of pipeline joints including mechanical, bell and spigot, and internal mechanical seals — reducing costly and repetitive maintenance.

• Data gathered from the CIRRIS XI Inspection Robot can be fed directly into risk models so pipe risk can be measured using direct inspection data.

• The CIRRIS XI and CIRRIS XR Robots feature faster driving speeds, improved maneuverability and the ability to traverse over obstacles and bends in the cast iron pipe.

• Robotic inspection and rehabilitation is performed in live gas mains, so there is no need to disrupt gas service to residential and commercial customers.

The robotic systems developed by ULC Robotics and SGN addresses the three primary risk factors of operating large diameter gas mains — fracture, corrosion and gas leaking from pipeline joints — allowing gas utilities to safely and confidently leave their assets in the ground for years to come.

“CISBOT and the CIRRIS XI and CIRRIS XR robots are ushering in a new era of minimally invasive life extension for these critical assets,” noted Penza. “Using robots, gas network operators now have the ability to asses and manage mains while eliminating leakage and minimizing monetary and social costs which are much lower than that of traditional repair and replacement.”

With the ability to address the key risk factors gas utilities will have a more comprehensive understanding of the integrity of their assets, allowing them to avoid costly replacement, ensure their pipeline is operating at the highest level of safety and decrease the amount of methane escaping into the atmosphere.

Commercial rollout of the CIRRIS XI and CIRRIS XR Robotic Systems are set to begin in 2016. ULC Robotics plans to use all three robots as part of their large diameter cast iron inspection and repair programs.


Robert Kodadek is director of research and development for ULC Robotics.