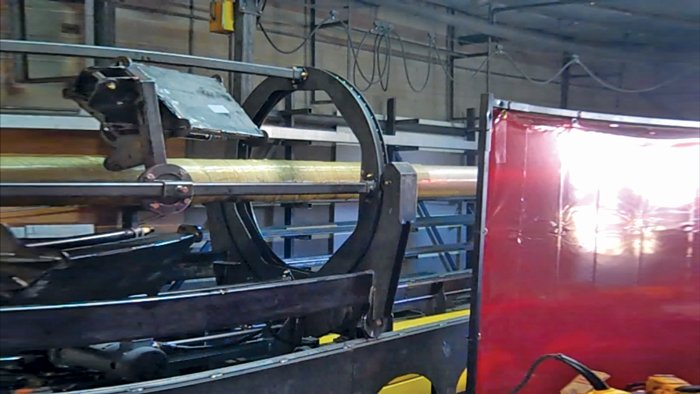 Published by Mike Kezdi March 6, 2015 View Profile
Famed painter Bob Ross would often refer to a stray cloud or tree, due to a brush stroke, as a “happy accident” and in every industry, new products are often the result of such happy accidents.

In this case, QuakeWrap Inc., an innovator in the pipe relining market, was in search of a lightweight, yet durable, pipe for short repair jobs. The result was StifPipe, which uses a honeycomb structure, similar to what is used in the aerospace industry. The honeycomb adheres to inner and outer sheets of carbon fiber skins for reinforcement. This construction allows StifPipe to weigh considerably less than conventional pipes but able to withstand high internal and external pressures. Alternatives on the market are generally several layers of carbon fiber skins or two layers of skins with sand and resin comprising the middle section.

“Honeycomb construction, although it has not been used in pipelines, is very widely used in other industries like the aerospace industry. For example, if you fly a Boeing 737, the floors are all made of flat sheets of composites that have a honeycomb core just like our pipe,” says Dr. Mo Ehsani, president of QuakeWrap. “I borrowed this from the aerospace industry and then added it to the pipes.”

Developed by Ehsani, StifPipe hit the market in 2012, and found use in a variety of sewer and water applications. The pipe comes in a variety of shapes and sizes, allowing a custom fit and providing a tighter fit than many competing products.

It was during development of StifPipe that Ehsani had his “happy accident,” realizing that the process of wrapping a carbon fiber skin around a mandrel and then adding the honeycomb layer, though not complicated to do by hand, lent itself to automation.

“With StifPipe, everything was made manually in our shop in shorter sections,” says Ehsani, professor emeritus of civil engineering at the University of Arizona. “I realized this manual process was not so complex that it couldn’t be automated so we started to focus on automation.”

Once cured, StifPipe made on the mandrel could partially be slipped off the mandrel. A new section of pipe could be built behind it, added to the already-created structure and form a single piece of pipe; these steps could be repeated to create an infinitely long pipe.

These processes, Ehsani surmised, could easily be fitted to a trailer and produce a mile or two of pipe before a joint was needed. Joints, he says, are the primary source of leakage and environmental pollution along a pipeline.

StifPipe and InfinitPipe are identical products, with the difference being the epoxy used. StifPipe, by design, cures overnight without the use of heaters or machines. InfinitPipe, because it’s designed to be mobile, requires a different approach.

Through trial and error, the designers at QuakeWrap found a resin, that at 300 F, cures in three minutes. Given the length of the mandrel, a pipe builder has the ability to create 10-ft sections of pipe in three minutes.

“Speed of construction really matters because you want to move your equipment quickly along the roadway and be efficient in production,” Ehsani says. Because of its lightweight honeycomb construction, InfinitPipe can easily be moved around without the use of heavy machinery. The 28-ft InfinitPipe Mobile Manufacturing Unit weighs less than 7,000 lbs and is designed to fit inside a truck.

Following this breakthrough, Ehsani looked to create his first Mobile Manufacturing Unit (MMU) and sought a grant from the U.S. National Science Foundation. QuakeWrap received the Foundation’s Phase I Small Business Innovative Research grant for $150,000 in 2013. A third of the funds went to the Trenchless Technology Center at Louisiana Tech University for proof of concept, which determined the pipe was structurally sound and up to the task.

QuakeWrap used the remaining funds and its own investment to create the first MMU capable of building 8-in. diameter pipes with a targeted market in water transmission. The first sample of pipe made with the MMU can handle an internal pressure of 500 psi, which Ehsani says is far greater than most sewer and water lines. However, the pipe can be designed for any pressure rating by increasing or decreasing the number of layers of carbon fabric that are wrapped around the mandrel.

QuakeWrap completed its first MMU in late 2014 and Ehsani envisions the first applications to be new construction in which trench-laid cylindrical pipe is the favored choice but the MMU could easily switch to other shapes and sizes. Also taking note is the manhole repair sector and the energy sector.

For manhole repairs, InfinitPipe, in small 6- to 8-ft sections, can be placed in the manhole with minimal equipment necessary.

Because InfinitPipe is made on the mandrel, as needed, sizes can be within a fraction of an inch of the original pipe and the small annular space can be filled with grout or resin. In any application, this allows the new section of pipe to be closer in diameter to the original compared to other products.

“I would say the biggest common interest (in all the inquiries) is that they don’t want joints because they want to avoid leaking,” Ehsani says.

In the oil and gas industry, where single point mooring bases (SBM) are used to offload oil and gas from tankers, the pipeline systems, many of which are steel, are nearing the end of the life cycle.

Tankers, too large to enter port, offload at the SBMs and the oil flows through the SBM to a subsea pipeline that connects to a terminal of some sort. InfinitPipe offers a corrosion-free alternative that has minimal joints where leaks can occur.

Ehsani says InfinitPipe, in this application, would be made onshore close to the diameter of the existing pipe and able to handle the same amounts of pressure. The mile-long section could be pulled through the existing pipe in many cases as one piece, eliminating the need for welds.

“The broader impact/commercial potential of this project is enormous, considering the versatility and low cost of the pipes, in addition to the corrosion resistance that they provide. The ability to produce pipelines onsite has far-reaching implications for remote locations and developing nations that have little to no infrastructure for natural gas discovery and water delivery systems,” Ehsani says. “As the mobile manufacturing units are developed and the process becomes more efficient, the resulting cost-savings, not only in terms of the pipe itself but also on equipment and freight costs, will be substantial. This, in addition to the long-term savings from reduced leakage and maintenance of these pipelines, will lead to an industry shift towards this greener, more efficient technology.”