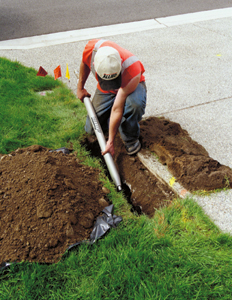 Allied Construction Products LLC pioneered and developed the concept of pneumatic underground piercing tools more than 35 years ago with the development of its Hole-Hog. Over the past two years, Allied has introduced a new generation of Hole-Hog that “shoots” straighter, hits harder and runs faster as it delivers high impact energy and a rapid percussion rate for a maximum performance.

Pacific Cable Construction Inc., a prime contractor for Verizon Communications in the Pugent Sound area in the State of Washington, has successfully employed the new generation Hole-Hogs as the contractor is currently using a Model HH-46 (1 7/8-in. diameter), Model HH-57 (2.24-in. diameter) and Model HH-68 (2.68-in. diameter).

In business for more than 25 years as communications cable contractor, Pacific Cable Construction has responsibility for five counties in the northwest Washington state area. Pacific Cable also has road-boring contracts with various PUDs in western Washington and operates horizontal directional drilling units, as well as maintaining a large inventory of underground piercing tools. Allied’s Hole-Hogs make up the largest part of its piercing tool inventory

Pacific Cable currently has two HH-57 units that have been in constant service for two-plus years. Company owner Steve Jones remarked, “We have had virtually no maintenance problems to date.” This is bittersweet information to Harlan Nelson, president of Nelson Tool & Equipment LLC, Allied’s local distributor. Nelson “complains” that “The new HH-Series don’t come back as I’m not seeing any parts and repair business. They are maintenance-free and reliable.”

The majority of the work Pacific Cable is doing involves the installation of the Verizon Fios System of fiber-optic wiring for primarily residential areas. The job requires the use of 1.25- and 1.75-in. interdict sheathing. Jones has been testing Allied’s newest model, a HH-46, which is specially designed for fiber-optic applications. Jones is happy with the results he has seen using the tools. “I’m impressed with the HH-46 as it hits faster and has more power than a competitive unit that we would have normally used.”

Pacific Cable is now field-testing a Model HH-68. It will rotate between three new field crews doing both fiber-optic and buried copper wire installations. The areas are composed of varying soil conditions including hard clay and cobble. Nelson says that Pacific Cable Construction selected the HH-68 because, “It matched up well with the soil conditions.”

Jones summarized his overall opinion of the new generation Hole-Hogs by stating, “I have continued to be impressed with the low cost of ownership of the Allied product as fewer parts to replace has sped up repair waits and reduced cost.”

Rainier Valley Construction has been another advocate of the new generation Hole-Hogs. Rainer Valley is a cable and fiber-optic contractor for Qwest and Comcast and does communications and underground power work for Pugent Sound Energy. Rainer Valley owners are Stan and John Choate and they use horizontal directional drills, but rely primarily on the work of the new generation Hole-Hogs; the Choates maintain approximately 15 in their inventory in all sizes.

Rainier Valley Construction dedicates about 60 percent of its work to fiber-optic construction, which requires the use of 2-in. PVC conduit. The workhorse for Rainer Valley has been a Model HH-79 Hole-Hog. Stan Choate remarked, “They hit hard, go fast, no downtime and perform in any soil conditions.” They said they know that they can have their old (10 years in operation) Model 1000C Allied units rebuilt to run as if new again,but they have decided on the new generation technology of the HH-Series.

Rainier is now demonstrating the Model HH-68 and is impressed. John Choate stated, “I’ve found it’s power-to-weight ratio amazing. It’s easy to handle in close quarters. It has tremendous power to cross under a street. And, it’s as capable as the 3-in. diameter hogs we normally use.”

One of the reasons that both Stan and John Choate are loyal Allied Hole-Hog users is service, which is also provided by Harlan Nelson’s Nelson Tool & Equipment. Stan Choate commented, “Harlan gets our units in and out quickly because of fewer part failures and these new generation Hole-Hogs hold up to abuse better than any other product we have tried,” said Stan Choate.

Allied Construction Products LLC entered the construction equipment market in the late 1950s with products that included grouser bars called Grip-Lug and rotary asphalt cutters called Roto-Cut. But, when Allied officials visited the Academy of Sciences in Russia in the early 1970s, they came across an innovative underground piercing tool that utilized a reversing mechanism. At the time, the ability to reverse a piercing tool was something that still hadn’t been quite worked out. The major advantage at the time was that the product was reversible. Impressed with the design, Allied purchased a license to manufacture the product from an entity in the Soviet government. What resulted was the introduction of the Hole-Hog product line in 1972. Pneumatically-operated, Allied’s Hole-Hogs are able to travel underneath roads, walkways, lawns and driveways without disruption during utility or drainage pipe installations.