The City of Spring Park, Minnesota, is located in the heart of Lake Minnetonka, one of Minnesota’s largest lakes. Known for its big recreational opportunities and big dollar homes, the sprawling Lake Minnetonka area represents one of the more exclusive tracts of real estate in the state. But as is the case around the country, deteriorating and under performing infrastructure below ground pays no heed to the large estates, expensive cars and luxury boats that exist on the surface.

Recently the City was faced with the task of replacing an undersized water main that serves a lakeside neighborhood. According to Gunnar Smith, project manager with utility contractor Geislinger & Sons, Watkins, Minnesota, the main was being upsized for capacity reasons. “The existing 6-in. cast iron main was on the list to replace. It was undersized for the demand of the area. Geislinger & Sons was contracted to upsize the main,” he said.

According to Mark Dorn, pipe bursting specialist from trenchless equipment manufacturer TT Technologies, Aurora, Illinois, the project was a prime candidate for trenchless pipe bursting. “This one checked all of the trenchless boxes for sure. It was a residential area, on the lake. There was going to be a high level of scrutiny on this project,” Dorn said. “They would need to keep disruption down as much as possible and maximize their time on the job. Static pipe bursting was the choice for this project.”

For the Spring Park burst, Geislinger & Sons choose a Grundoburst 800G static pipe bursting system from TT Technologies to burst and replace the 2,300 ft of 6-in. cast iron water main. “We have used the static pipe bursting process before. It’s not something we use every day, but in specific situations, it’s the right method,” Smith said. 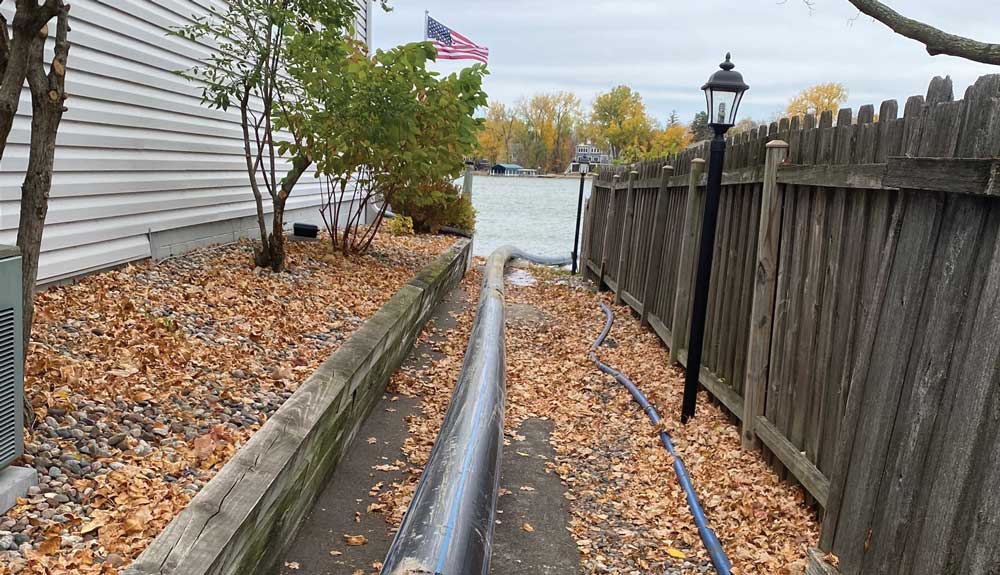 A majority of the bursting runs were approximately 300 ft in length, often traveling through backyards, in between houses and along the lake.

“They started as part of Barbarosa and Sons. Jeff, Scott and Bruce were all superintendents,” Smith said. “When Bob Barbarosa was getting ready to retire, he helped them get their own business going. Today, we specialize in sewer and water projects, the difficult work. That’s always been part of our reputation, the contractor that’s willing to take on what others won’t. Those deep, wet, muddy projects are right up our alley.”

According to Smith, as a company, Geislinger & Sons focuses on four core areas, safety, quality, service and profitability. And with the company’s commitment to getting the tough jobs done, the project in Spring Park certainly fit the bill.

The 2,300 ft of existing 6-in. cast iron was upsized to 10-in. high density polyethylene pipe (HDPE). According to Dorn, any upsize requires special consideration. “Upsizing can require some careful planning. For this particular burst, Geislinger & Sons was well within tolerance for this type of upsize,” Dorn said. “Going from 6-in. to 10-in. has become more common. And even with the smaller static unit that they used on the project, the 800G, they were well within that machine’s capability. But when you start going beyond one or two nominal sizes larger, contractors need to take stock of the ground conditions, peripheral utilities, as well as things on the surface.”

The project took place in a residential area along West Arm Road in Spring Park, right next to Lake Minnetonka. According to Smith, space was one of the biggest challenges on the job. “All the conditions on site were very tight. Just getting equipment back there was difficult. We were working in backyards, many of which were basically right on the lake,” he said. “We also had to maneuver through narrow corridors to reach the work sites. We had run equipment back and forth so what we ended up doing was accessing the backyards through one of the central lots. We kept the path down the middle and dispersed from there. That helped keep the amount of disruption down to a minimum. We also put down plywood in areas to help minimize any yard damage.”

The tight jobsite was also a reason for utilizing the trenchless static pipe bursting system. “Initially, we talked about using the larger Grundoburst 1250, but after taking a closer look, we figured we would be able to do the intended pulls with the smaller 800G,” Dorn said. “Keeping the pits small was a goal for limiting disruption, saving space and because of the extensive dewatering Geislinger & Sons crews had to do.”

The Geislinger & Sons bursting crew consisted of five crewmembers. Bursting pits measured 10-ft wide by 24 ft and were shored with trench boxes. Soil conditions were very wet with high ground water levels and some of the pits just a few feet away from the lake. Well points were installed to help dewater the pits. 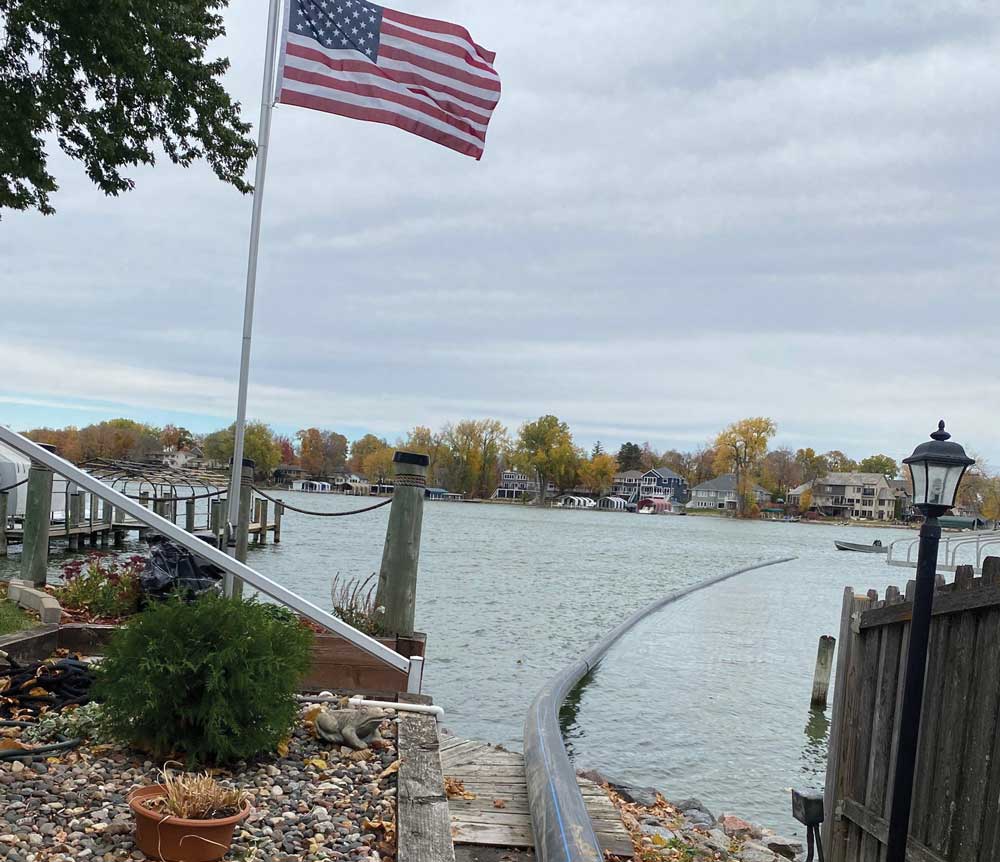 On, By and In the Lake

The project outline was loosely in the shape of a rectangle with the longer lengths of water main running east/west and parallel to the lake and the shorter ends running north/south, perpendicular to the lake. The main that was being replaced tied into a larger main coming off the primary highway. At its closest to the lake, on the northern east-west side, the main came within 5 ft of the water’s edge. In three instances during pipe bursting the product pipe actually needed to be staged, floating in the water.

“Several times, we had to have the pipe laid out into the lake. Starting on the west side by a group of townhomes, we pulled from the lake toward the road,” Smith said. “We couldn’t pull in the other direction because we needed to avoid staging pipe over an active rail line. So, we staged the HDPE product pipe by floating it out in the lake. Later in the project as bursting moved toward the east side of the rectangle, as the main began its turn toward the south, the angle of the run was such that it required the pipe string to once again trail into the lake. That happened one other time during the project as well. It all worked out fine.”

According to Dorn, crews were able to reduce the number of pits by reusing the pull pits whenever possible. “As the jobsite layout permits, sometimes crews can burst in both directions from a single pit and the Geislinger crews were able to do that numerous times on this project,” he said. “Basically, you put the machine pit in the middle of the run, burst in one direction than pick up the hydraulic bursting unit and turn it around. Then burst from the other direction. You’re saving time and reducing your total pit count.”

Most of the bursting runs were around 300 ft in length. There were services to every house that crews needed to install as well. Total bursting time per run was three to four hours from start to finish with one bursting run per day. The rest of the day crews spent digging the next pit, getting the machine set for the next run and staging pipe. After the pipe bursting was complete, crews chlorinated and pressure tested the main over a three- to four-day period. Then services were installed and everything tied back together.

“We started around Oct. 5 and finished the project by Nov. 10, that includes all of the service work, 23 in all,” Smith said. “Sometimes things go really good and sometimes they take a little longer. Customer support and the field tech people from TT were great. The biggest challenges here were the tight working conditions. Dewatering and working in the cold temperature added to the challenge, but pulling-wise everything went smoothly.”

“This one really went by the numbers,” Dorn said. “It was efficient and well-managed. The crew knew how to approach the project and scale equipment and efforts to match the jobsite. It was well-done all the way around.”