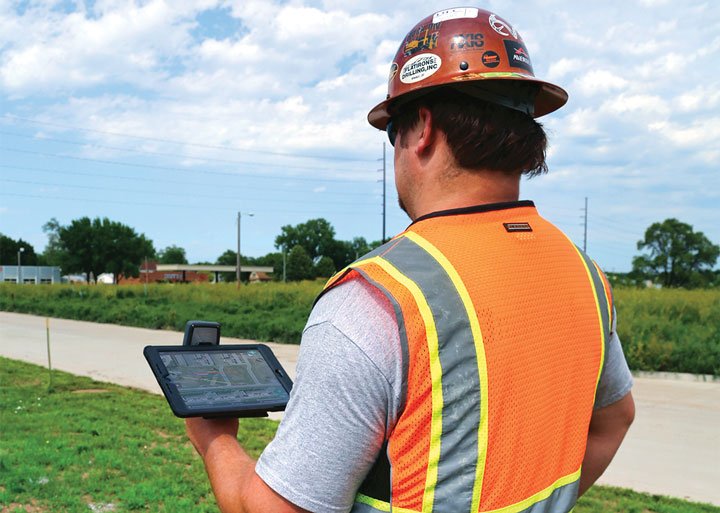 New technology has potential to improve efficiency, accuracy and reputation of HDD contractors

Here’s one way Erik Carlson plans a job for Pinnacle Construction & Directional Boring Inc., the South Carolina utility installation company of which he is owner and president.

He goes to the jobsite and white-lines it, calls for locates and waits for the locators; then his crews pothole to visually spot each utility line and manually measure the distance to each utility.

Then Carlson takes that information, which he has recorded by hand, and loads it into a bore-planning software program. A hard copy of that report is given to crewmembers. They do their bores, write down their depths and other information, and put that data into an as-built report given to the project owner.

This illustrates why so many horizontal directional drilling (HDD) contractors say they are drowning in paperwork. It also reaffirms another trend in the industry: more and more project owners and regulatory agencies are requiring reports, both pre-bore plans and as-builts upon completion. And they want accurate information in those reports, not a contractor’s estimate on, for instance, the depth of a sewer invert.

It’s also a reason underground construction contractors are starting to seek out digital tools to help them accomplish these tasks in ways that are more user-friendly, efficient and accurate.

Pinnacle Construction & Directional Boring found a solution that has helped cut the time spent mapping a bore significantly. The company was an early user of a version of Vermeer Projects, a web-based job planning tool that was equipped with mapping and bore planning modules.

Let’s look at Carlson’s process when he uses this software.

He walks the bore path with his smartphone and, with the help of GPS technology, enters data like utility locations, depths, distances and offsets. That information then is available as a digital record that can be viewed on a smartphone, tablet or computer.

“It allows you to create a map, based on a Google Earth image, to lay out the project and give you a bird’s-eye view of the jobsite,” Carlson says.

That plan can be sent digitally to his crew, project owners and regulators. He can also create an as-built, which can be emailed after the project is finished. Pinnacle Construction & Directional Boring started using its version of Vermeer Projects in the spring of 2016l, and the results have been significant

“We’ve determined it has allowed me to map a jobsite in half the time of the traditional method,” Carlson says.

That’s just mapping. Carlson estimates that the optional bore planning module will reduce the time his company spends on that task by a minimum of 50 percent.

“It allows us to give to our client work that’s similar to what they’d get from a full-service engineering department with the data processing capabilities at a national or international-size company, and we’re a very regionalized, small, privately held company,” he says. Pinnacle Construction & Directional Boring, located in Charleston, South Carolina, has about 35 employees and nine horizontal directional drills. It’s been in business for over 15 years, and after its early HDD work focused on telecommunication installations, now undertakes mostly electric, water and sewer projects.

The company works within a 50-mile (80.5 km) radius of Charleston, and Carlson says business is very good.

Many of their projects involve crossing roadways regulated by the state Department of Transportation (DOT). The DOT has certain standards it requires to be met, and it wants documentation of what was done both before and after a job. It is on these jobs that Carlson has used Vermeer Projects the most.

“This tool allows us to go to the jobsite, document and create a plan based on the actual conditions on the jobsite and then convey that information to the crew when they go out,” he says. “It allows us to record existing utilities, how we’re going to avoid them and then have a plan that we can present to the DOT, as well as a record of what we actually did in the field for the as-built.” Carlson says pre-job planning is a good practice no matter what but has become a requirement by many project owners and state agencies in South Carolina over the past five to 10 years. This is a trend occurring across North America and in many other places worldwide. They want assurances that the HDD contractor will complete bores safely and to the conditions laid out in the bid documents. And after the project is done, they want a report that shows what was done.

Certain digital planning tools can assist in this by collecting pre-job information in a single electronic report that can be emailed to the project owner, inspectors and anyone else who needs it. This can be done before and after a job.

“These digital tools help you prove that you put the product where the project owner told you to put it,” Carlson says. “And if you deviated, it shows how much you deviated so that you can either justify why you did so or document where it is.”

Clients don’t always tell contractors how detailed of a plan they need for an as-built, and many a contractor has had the experience of being asked for certain information weeks or even months after they completed the job.

“Some contractors will respond, ‘We were like 3 to 5 ft deep the whole way through there,’” Carlson says. “Three to 5 ft isn’t very good for the next guy. So yes, it’s critical to have a detailed record of what you did and where you were at with the actual left, right and depth.”

In addition to being more efficient, these tools also are potentially more accurate. Poor handwriting or transcribing errors can cause problems. Or think of how often HDD work occurs in bad weather. Someone trying to map a bore path and record information like utility locations on a rainy and windy day using pen and paper could make a mistake. Paired with a quality GPS device, contractors may be able to get data that is accurate to within 1 in.

One thing to remember is Pinnacle Construction & Directional Boring was an early user of Vermeer Projects. As the software evolves, Carlson is excited about the possibilities for scanning and attaching various documents to send to his clients, such as reference and supporting documents, checklists and a comparison of the as-built vs. the original bore plan.

Carlson has found that the benefits have extended beyond the jobsite. One area is attracting potential employees. Although business is very good for Pinnacle Construction & Directional Boring, filling skilled labor positions has been a big challenge. That’s true industrywide. Carlson believes digital jobsite tools can help with that.

“The workface isn’t looking for a fancier shovel,” he says. “They’re looking for bells and whistles and technology tools.”

He says technology can also help experienced employees improve their skills by allowing them to see how precisely they complete a bore and learn from mistakes. His crews that have used Vermeer Projects find it to be much better than manually entered reports.

“Like a new locating system, once you start using it on a daily basis, then you really won’t understand why people would do it a different way,” he says.

In speaking of other benefits, Carlson returns to what it does for the image and reputation of his company. By the nature of the work, underground construction projects are mostly out of sight once finished.

“So there are very few ways to compare us to another guy that puts pipe in the ground,” he says. “But with the technology tools, when I can provide a high-quality as-built and a project summary, that’s what the client’s going to see and remember, not a three-ring binder with 14 different pages that have handwritten notes, drawings, highlights and redline marks on it, and, if they need to make a copy, they have to go to the copy machine.”

Carlson sees technology like bore planning, mapping and reporting tools to be the future of the underground construction industry and something that will set companies apart. He has this advice for his fellow contractors:

“My first thought was, if you’re not using them, you need to start using them now so that you don’t get left behind. But the more I think about it, I’d rather you not starting using them because I want to leave you behind as we continue to be at the forefront of our field.”