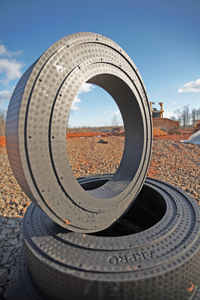 The Town of Dartmouth, Mass., recently trialed a new solution for repairing and replacing the brick adjustment layers in the chimney section of their manholes.

Traditionally, layers of brick would have to be removed and replaced, with mortar being set between each brick and layer, attempting to set the height of the frame as close to the road surface as can be achieved with a 1 ½-in. thick brick. For this trial, Dartmouth used PRO-RING from Cretex Specialty Products, made from highly engineered expanded polypropylene, as an alternate approach.

To adjust 6 in. in the manhole, the traditional bricks and mortar would be built into three layers. Materials for those 6 in. would weight more than 140 lbs. PRO-RING offers a 6-in. adjustment in a 14-lb single piece. Town workers can reduce the risk of back injuries, crushed fingers or crushed toes, which is appreciated both by the workers and the town’s budget for workers compensation claims. Additionally, the rings are more durable than the brick, as they can be dropped, kicked, or hit with a shovel without degrading its performance in the road.

Another concern for the town was the time required to complete the repair and open the area for traffic. Since the manhole being repaired was in the middle of a small but well traveled roadway, traffic would be severely disrupted until the manhole and surrounding roadway could be traffic ready. Installation of PRO-RING is completed with an adhesive pumped from a caulk gun, and is traffic-ready immediately upon assembly. Combine this with the speed of maneuvering the rings compared to building up courses of brick, and the traffic disruption can be reduced by several hours compared to their previous techniques. 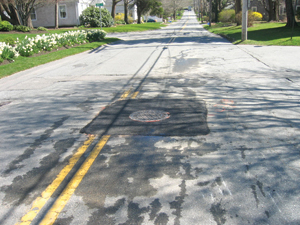 Dartmouth officials were also looking to improve their ability to fine tune the adjustment of the frame height much more precisely than they could with brick. They can now adjust with ¼-in. height increments, as well as with angle rings that can be dialed in to fit and slope desired for the frame to match the road. With brick, they could rough set and then use mortar to fine tune, but the process was time consuming and the thicker applications of mortar were typically failure points as the road experience traffic loading and freeze/thaw cycles.

The town planners are also looking for an increase to the life expectancy of the manhole, since the expanded polypropylene material is designed to absorb the energy of the traffic passing over the manhole frame before it is passed into the concrete cone used to construct the manhole. This repeated impact of tires onto a manhole is often a major contribution to the degradation of the entire structure, as well as the surrounding roadway. PRO-RING has provided a solution that will extend the life of both road and manhole structure.
Installation

Cretex regional manager Lee Haessig met with a town work crew, headed by Paul Pacheco, at a manhole in a residential area that had been identified as needing repair.

Workers used a jack-hammer to break the asphalt pavement and excavated, exposing the manhole frame and top of the concrete manhole chimney and cone. Once the frame and existing bricks were removed, Haessig measured the depth from road surface to the chimney at 16.75 in. in one direction and 15.75 in. in another direction indicating a sloped road surface was present. Allowing for the 7-in. height of the manhole frame, there was a space sloped from 9.75 in. to 8.75 in. to fill with new rings.

A quick set, non-shrink repair mortar was used to fill in some minor surface defects on the top of the manhole cone to ensure a level mating surface was provided. Haessig then applied a layer of adhesive to the bottom of a 6-in. grade ring with a caulk gun, filling the trenches to make sure that adhesive would be in full contact with the concrete surface of the cone when the ring was set in place.

Once the grade ring was in place, he laid down circular lines of adhesive in the trenches on the bottom of a 2-in. thick finish ring and aligned the grooves on the underside with the tongues on the upper side of the grade ring, compressing and twisting to spread the adhesive and ensure a complete seal. The same process was applied to an angle ring, which was placed on top of the finish ring. For this manhole, one angle ring met the slope required, so the stack was now complete and ready for the frame and cover. Haessig then applied adhesive in a zigzag pattern, covering the entire top surface of the angle ring. He and a city worker lowered the manhole frame onto the adhesive on the finish ring. The city crew then backfilled the excavation with gravel, compacted and then placed asphalt in two lifts to finish the repair. The entire operation, from the first application of adhesive until frame was set and ready for  back filling, took less than eight minutes.

The town installed the first rings in early April 2010. This installation was in a roadway, with the intention of observing its performance under the consistent loading from the usually busy traffic patterns. The manhole sits directly in the path of driver side tires as vehicles pass, so it was an ideal spot for evaluation. After four months under these conditions, the rings have continued to perform as expected, with no signs of degradation or adversity. Based on these observations, Dartmouth plans to begin utilizing PRO-RING in upcoming projects, town officials have said.