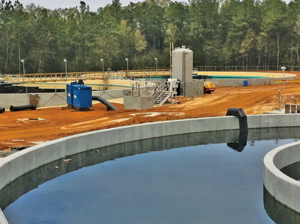 Adding up to more than $26 million and still in progress, the upgrade of the Little Choctawhatchee Waste Water Treatment Plant and decommission of the Beaver Creek WWTP in Dothan, Ala., has been the City’s largest public works project in its history.

Dothan is the self-proclaimed “Peanut Capital of the World” and is located at the southeast corner of Alabama. Pumping requirements involved the temporary bypassing of Dothan’s sewer flow between the two plants and the site dewatering for the expansion and upgrade of the existing Little Choctawhatchee WWTP.

The project called to increase the flow capacity of one of the four wastewater treatment plants in Dothan, the Little Choctawhatchee WWTP, from 5 to 12 million gallons per day (gpd), in response to an increased flow acquisition and phasing out of the existent Beaver Creek WWTP. Causing the city ongoing trouble, the Beaver Creek WWTP attributed to repeat overflows and officials knew it was time to solve the problem by tackling this project.

Aforementioned, the project required establishing temporary lines between the two plants in order to redirect the established flow from Beaver Creek WWTP into the Little Choctawhatchee WWTP. A precise redirection of flow and a pump system that could withstand raw sewage over an extended period of time was necessary for the bypass portion. Site dewatering at Little Choctawhatchee for a deep manhole was also needed. As a sewage bypass and site dewatering expert, Thompson Pump eagerly stepped in for both applications.

Beginning in November 2010, after the lines to Beaver Creek WWTP were tied to prevent further city flow into the plant and the new clarifiers and holding tanks were built at Little Choctawhatchee, Thompson Pump installed the first bypass application. This bypass aided by testing the newly built clarifiers and plant lines. Using two Thompson Pump 18JSCs, or two 18-in., high-pressure, solids handling Enviroprime pumps, and 2,000 ft of 18-in. HDPE pipe, treated water was pumped between the clarifier tanks. The water from clarifier tank #2 was gravity fed into the pumps and discharged into clarifier tank #1, where the water then gravity fed into a separate reclaimed area while the plant’s outfall structure was being completed.

HDPE pipe provided the security of strength and durability with a reduced leak rate resulting from the fusion process. In addition, HDPE pipe is more environmentally sustainable as it is non-toxic, and corrosion and chemical resistant.

The Thompson Pump exclusive Enviroprime pump was an especially important decision when considering the existing involvement and regulation of the environmentally hazardous material handled during the project. An Enviroprime pump is used in many applications, especially sewage bypasses, where the project site cannot be contaminated by pump fluids such as raw effluent.

In January 2011, Thompson Pump began the second bypass using two 18JSC pumps with 600 ft of 18-in. HDPE pipe. Thompson’s pumps handled the displacement of raw material from Beaver Creek WWTP during its phase-out and served as the main influent sewer line into the Little Choctawhatchee WWTP awaiting completion of the new 40-in. main line. The pumps handled average flows of 9 mgd, reaching peak flows to 11,200 gpm.

Thompson Pump, also a well-trained dewatering company, provided site dewatering necessary to set the 48-in. manhole for the main influent line. The manhole had a 96-in. base, required excavation to 38 ft deep and took nearly three months to set.

Eutah Construction Co., headquartered in Jackson, Miss., built the new lines using 12 Thompson Pump 12Rs, or 12-in., high-vacuum rotary pumps, to dewater the area. The Thompson Rotary Wellpoint Pump is the original rotary wellpoint pump trusted by contractors worldwide for more than 40 years for reliable, cost-effective construction dewatering. With assisted priming and automatic re-priming, high vacuum up to 29-in. Hg capacity, high air handling to 400 cfm and flows to 3,000 gpm, the Thompson rotary wellpoint pumps are specifically engineered for wellpoint and sock dewatering and are available in sizes 8 and 12 in.
Heavy rains mixed with the Alabama soil conditions and deep excavation of the site caused occasional jobsite setbacks for the contractor. “Many man hours were spent on this job,” said Bobby Thompson. “There were many early mornings and late nights moving pumps and piping to adapt to the unexpected, excessive rain and flooding conditions.”

Both bypassing applications and the wellpoint system were in use through April 2011. Eutah Construction Co. has plans for further bypassing with Thompson Pump in order to fully finalize the WWTP transition. 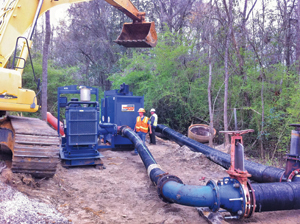 The plant expansion was critical in preventing further contamination to the city’s environment while preserving the health of the people. Thompson Pump readily accepted the challenge to take on the largest public works project in the city’s history. Prepared with the correct pumps for the project they were able to regulate both the bypass and wellpoint procedures, two different applications which provided W.L. Hailey peace of mind with one company. “We were able to provide a turnkey operation,” said Thompson. “We handled the install, field preventative maintenance, and disassembly for both bypassing applications and the wellpoint system. We were able to provide these services with one company and one set of representatives overseeing the project for a better, more thorough pumping project.”

Dothan’s Utilities Mission Statement states: “To provide the world’s best leadership and quality services to the citizens of Dothan which affords them the opportunity to fulfill their educational, social, cultural, spiritual and economic needs.” After completion, Thompson Pump can look back on the long hours and know that their quality services, knowledge, and experience helped provide Dothan citizens the opportunity to meet their “environmental needs” as well.