Published by Jeff Corsie and Jim Weist May 28, 2021 View Profile

Irrigation supply is critical for the livelihood of farmers and residents in Southern Alberta, Canada. To protect the quality of irrigation water during severe weather and extreme flooding, a Stormwater Management Cooperative system was designed to reduce localized flooding through collecting, storing, and moving stormwater more effectively throughout the region.

The Western Irrigation District awarded the construction of this project to Whissell Contracting, which began work in January 2021. The scope of the project included replacing an existing, underground irrigation canal near Chestermere Lake. Whissell contracted Total Trenchless Ltd. (Calgary, Alberta) to perform this 84-in. diameter, critical tolerance bore.

The critical line and grade of the bore called for a pilot bore completed with an Akkerman 240A guided boring machine combined with a traditional auger boring machine to install the larger casing in multiple passes. The combination of pilot boring followed by traditional auger boring methods is an increasingly popular choice for close tolerance line and grade casing installations.

The Total Trenchless crew selected their Michael Byrne Mfg. 72/84-in. 1.9HD Auger Bore Machine paired with a Akkerman 240A GBM to complete the project.


The project had a couple of obstacles to overcome. The launch pit had limited space and tight quarters for running the machines, welding large diameter casing, and removing spoil generated by the 84-in. cutting head. Another potential obstacle was the incremental increase to 84-in. diameter with weld-on reamers from an initial pilot bore had not been attempted previously. The silty clay material to be encountered in the bore dictated the weld on reamer as the preferred installation method. Another method commonly used with the guided auger boring method is the use of a live swivel cutting head that connects to the Akkerman pilot tubes. The swivel head excavates and turns while the bearing keeps the pilot tubes from spinning. The live swivel head performs much like a traditional auger boring head, cutting and excavating the material through the auger and casing.

A 67-ft launch pit was installed, and 40-ft casing joints of 30- and 48-in. intermediate casing were installed behind the Akkerman pilot tubes using weld-on reamers for each diameter upsize. The final 84-in. casing was installed in 20-ft casing joints due to the weight of the casings and augers. The Michael Byrne D72-1.9 Auger Boring Machine was fitted with a lift kit to raise the machine 6-in. allowing for the 84-in. pipe to clear the auger track rails. The requirements for the 84-in. casing installation were a 0.41 percent slope with a line and grade tolerance of 25-mm. The Akkerman Guided Boring machine installed the pilot tubes exactly on the line and grade over the 187-ft pilot bore. The 30-in. diameter weld on reamer was attached to the pilot tubes, and then a 30- to 48-in. reamer attached to the back of the 30-in. casing. The final 48- to 84-in. reamer was installed to complete the auger bore portion. We understand this to be the largest diameter pilot to auger bore completed using this method.

The crossing was completed in 15 days without difficulties. The pressures experienced reached 4,000 psi for the pilot tube torque and thrust. The auger boring machine had pressures of 2,400 psi on just three of the thrust cylinders. The 187 ft of large diameter auger turned with ease. The final alignment and grade came out to the expected engineered design, and the guided bore was accepted. 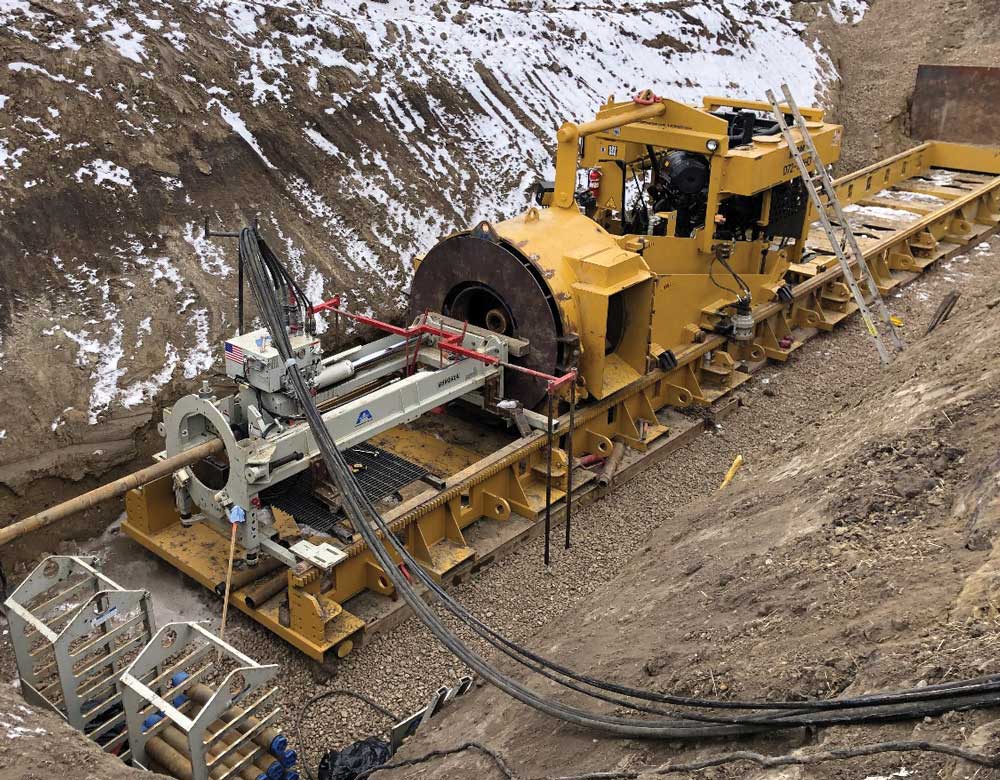 The Michael Byrne Mfg. 72/84-in. 1.9HD Auger Boring Machine has top of its class ratings for thrust and torque capabilities. The machine is powered by a 350-horsepower, liquid-cooled diesel engine. The hydraulic system delivers 68 gpm at up to 5,800 psi. The 10-speed transmission and the Michael Byrne B19 Gearbox are the heart of the machine and deliver more than 320,000 ft/lbs of torque. The combination of the D72-1.9 and the Akkerman 240 GBM are creating opportunities for large diameter guided bores that were not imagined a short time ago.

Guided auger boring has become one of the most common applications for the guided boring systems in North America, and its utilization has positively impacted the auger boring market. In early summer, Michael Byrne Mfg. boring machines will have options to include a guided bore mode. Guided Bore Mode will enable the trenchless contractor to flip a switch and make the Auger Boring machine the hydraulic power unit for the Akkerman 240A Guided Boring Machines, saving the contractor the need to purchase a separate power pack.