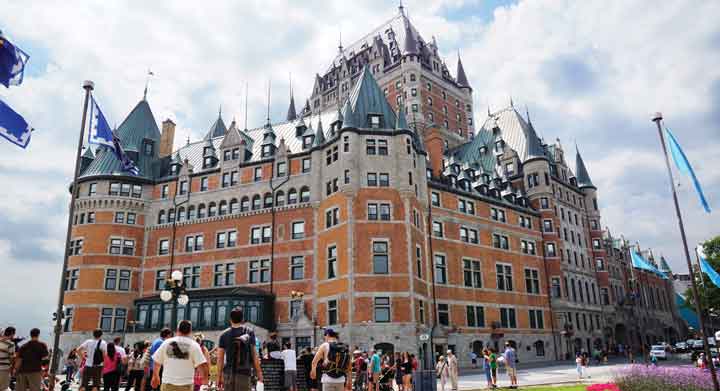 Editor’s Note: It is with regret that Formadrain Inc. announces the passing of Mr. Gérard Marc-Aurèle, the founder of the Montreal-based company and a pioneer in the field of steam-cured, non-VOC, epoxy CIPP liners. He initially founded DRAIN-CLAIR a drain cleaning company, in 1969, built the company under the banner DRAINAMAR Group to more than 100 employees and sold it in 1999. Formadrain was founded in 1994 and Gérard guided the development of the groundbreaking Formadrain lining process. Gérard also served as president of the CMMTQ District of Montreal for several years. He was an active member of the Employers’ Council of Quebec.

The Fairmont Le Château Frontenac holds a special place in the hearts of travellers from around the world as well as citizens of Quebec and Canada. Built in 1893, with many additions and renovations over the years, it is perhaps the most photographed hotel in the world and so cherished it has been named a UNESCO World-Heritage Site.  It is also a hotel beyond compare in service and prestige that makes it one of the world’s leading travel destinations.

Considering this pedigree, the hotel’s owners Ivanhoé Cambridge and Fairmont Hotels & Resorts sought to renew some of the infrastructures of the hotel. This included its cast iron, combined sewer of uncertain age below the hotel’s basement.

Planning to Replace the Combined Sewer

Initially, the hotel’s engineering firm WSP and general contractor Beauvais & Verret were thinking about excavating the entire 200-foot line and replacing it – a formidable task.  A subcontractor on the renovation project, Roger Veilleux, of Quebec-based Forage 3D, who had been brought in because of his company’s expertise in directional drilling, heard about the task and had a better idea – go trenchless and line the pipe.  He suggested using Montreal-based Formadrain’s proprietary steam-cured, industrial strength fiberglass CIPP lining system.  Forage 3D is also a Formadrain licensee.


To make the case to WSP and Beavais & Verret, Veilleux brought in Stephane Therrien, vice-president of Formadrain. Therrien, a civil engineer, helped develop the Formadrain system and has 20 years of field experience managing the installation of the product.

Formadrain holds a unique position as having been the first to pioneer steam cured, non-VOC liners in 1994. The system is “design engineered,” meaning that every piece of equipment and material is conceived and then built to perform together perfectly. This final schematic shows the hotel’s combined sewers under the basement further demonstrating why trenchless relining was the preferred method to repair the failing system.

In early March 2016, a meeting was held at the Beauvais & Verret office in Quebec to introduce the Formadrain system to Jean-Francois Bouchard, Eng. MBA from WSP and Alexandre Dupuis, Eng., project manager from Beauvais & Verret. Therrien led the presentation and showed that Formadrain was ideally suited to lining the Château Frontenac’s long-suffering combined sewer. In fact, it was tailored for solving such pipe rehabilitation problems.


The system does not require major excavations and it does not require special handling for the sewer’s transitions from 10- to 12 to 14-in. It also handles with ease the several 45 and 90-degree bends including a section that goes down for a few feet and then back up at a 90-degree angle. The 4- and 10-in. laterals would be easily lined.

The liner would repair all cracked, damaged or broken sections of the pipe even where the pipe was entirely missing. It would be fully cured in less than 90 minutes, guaranteed by steam curing. A further benefit was that the liner is ecologically friendly, as it contains no volatile organic compounds.

Best of all, the lining could be done at night and with relative quiet so there would be little disruption to the operations of the hotel.  Hotel management had made this a requirement of the job as they did not want hotel guests disturbed and hotel services interrupted.

Full excavation of the entire combined sewer was a daunting option and would disrupt the operations of the hotel.  So, after hotel management was informed of the lining option, Forage 3D got the go ahead and Roger and his engineer Joel Collard-Fortin started planning for their camera inspections and the lining installation.

Starting in April, the first camera inspection revealed an immediate problem.  The contractor’s building plans were wrong as to the exact location of the sewer.  Actually, no one knew exactly how old the cast iron pipes were or when they had been laid, so it was not surprising that the plans were inaccurate.

The inaccuracy meant that the first course of action was to correct the plans. Forage 3D using its Rigid SeeSnake was able to plot the exact position of the pipe for its full run.

The camera inspections showed that the cast iron pipe had degraded significantly.  In one location, where the pipe dropped down a 90-degree bend, at the bottom, the pipe had worn away completely.

The next action was to determine the location of excavation pits from which the lining could be installed. The liner is installed using a pull-in-place system. So four pits were dug at key points along the length the pipe as it went under the basement.

One of the lighter moments of the project was the cleaning of the pipe, which revealed many sets of lost keys and a significant amount of change that had been dropped into the system by patrons of the hotel.

The actual lining operation began at the end of May after a few weeks of delays.  The Forage 3D crew worked at night but several days of rain hampered the project because of the increased flow through the combined sewer.

The operation was to plug the sewer just upstream from the point where the lining was being introduced into the pipe. The sewer’s contents would then be pumped from the plug to the outside manhole.  When it rained the pumps were strained to capacity to keep up with the flow.  So it was decided not to work on rainy nights so an accidental spill within the hotel would be entirely avoided.

It had been determined that the sewer lining would be done in eight pieces, starting with the section closest to the outside manhole.  It was decided also to use Formadrain’s industrial strength epoxy for the job, which could much better handle the detergents and chemicals that came into the sewer from hotel restaurants and laundry.

Each work day, the lining piece(s) to be installed that evening were prepared at Forage 3D’s warehouse in Quebec.  There the industrial-strength epoxy resin was applied to fiberglass lining which was then rolled around a specially-fabricated rubber bladder and taped.  This snake of lining was then wound around a lateral reel and taken to the hotel.

That night the reel was moved to the upstream excavation pit for that installation.  A two-ton winch was located at the downstream point and the lining would then be pulled into place.  Once done, the bladder would be inflated from two 350,000 BTU steam units located inside Forage 3D’s Formadrain trailer outside the hotel.

After 90 minutes, with the cure complete, the crew would reopen laterals. The entire job was completed May 30.

Were the clients satisfied? According to Veilleux, nobody said a word. “That’s a good thing in this line of business,” he said.

Gerard Marc-Aurèle is the founder and president of Formadrain Inc.