How to Stop 125 GPM of Gushing Water

A precast sump pit of 5 ft diameter by 6 ft height, located at the base of an approximate seven-story Oxygen Pit water holding tower (OP). The cleaned and oxygenated water is discharged into the adjacent river. Groundwater began leaking into the OP.

The base of the OP is located approximately 30 ft below the groundwater table, with the sump pit around 36 ft below the same. As time went on, the leak went from a nuisance to an approximate 125 gpm of gushing water.

It was so severe it took only a few hours for the water to rise to the same height as the exterior water table. The water, entering into the bottom of the sump pit, was also causing the sandy soils from under and around the OP to be washed into the sump pit. This created grave concern of the possibility of the OP tilting, with even a chance of it falling into the adjacent river.

The washed out soils were continually being replaced by the plant. Additionally, at least two large industrial size sump pumps had been ruined due to the sandy soil running through and stripping the pumps. 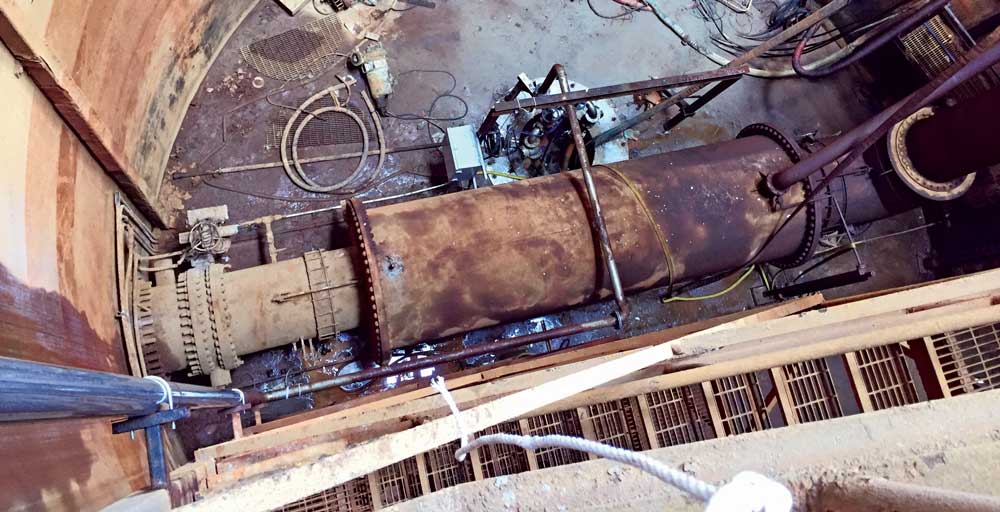 Initial discussions with the customer indicated they wanted to have Portland-based grout injected through the sump pit bottom in an effort to plug the hole. Take note that at this time the hole was estimated to be about 2 in. in diameter. I explained this product and method would likely not be successful due to the amount of flowing water, which was only approximately 50 gpm at that time. A low slump mix could be injected, but it likely would wash out prior to it ever setting enough to stop the water. On the second visit to the site, it was estimated that the flow had increased to about 75 gpm, meaning the hole in the base of the concrete sump pit was also expanding.

The owners had decided to try stopping the water infiltration by inserting a steel “sleeve” into the pit. This sleeve was smaller than the original sump pit by approximately 1.5 ft diameter and 1 ft depth. The new plan was to have my crews inject a bagged, cement-based specialty grout into the annulus space between the pit and steel sleeve, through 12 valves they had installed into the steel pit walls (three each (low middle and high) at 12, 3, 6, and 9 o’clock). Again, it was explained this would likely not be successful due to the amount of water gushing inward. Keep in mind they wanted all of the water infiltration stopped. Therefore, a cement-based grout would likely allow for water infiltration over a short period of time since the injected product would not bond with both the existing concrete and new steel. 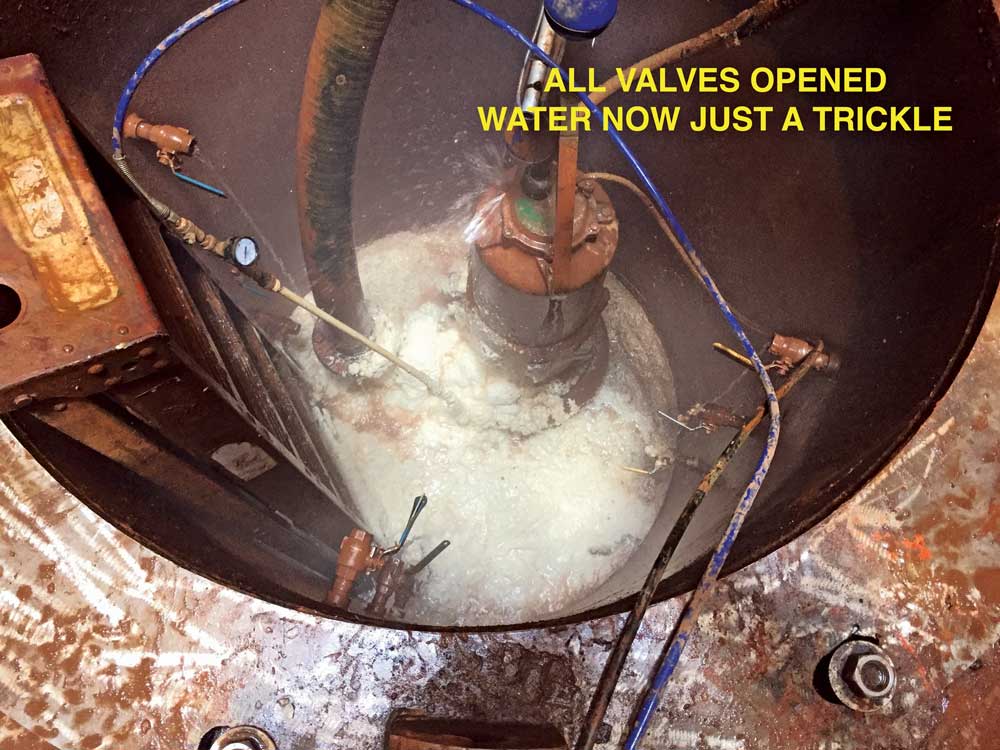 Although no one knew the size of the hole at the bottom of the sump pit, the amount of MasterRoc MP 355 1K pumped meant the diameter of the void was quite a bit larger than the client had initially thought, as was the opening at the base of the pit.

Steve suggested utilizing a urethane-based foam grout. Consulting with Ed Paradis (BASF), we settled on using BASF’s MasterRoc MP 355 1K for the project. The decision was made based on the fact that this product had a proven track record of stopping gushing water. In addition, the product is a one component chemical grout, making it easier to maneuver around within the limited space at the base of the seven story “silo” containing various obstacles (stairwell, large diameter pipe, etc.), not to mention having to crane all the materials and equipment down into the pit through a narrow skylight.

On the day of the injection, the estimated water flow was around 125 gpm. At our suggestion a single valve had been placed in the center of the bottom of the steel insert. It was through this single 2-in. valve that we would insert a 1-in. PVC tremmie tube to pump the MP 355 1K through, utilizing the valves located on the side of the pit as exit/relief valves. When we inserted the tube, it went approximately 4 ft below the base of the pit — without resistance — and the water pressure was high enough to spew out our injection port. So, we knew there was at least a 4 ft deep void, but how wide was it? The base of the OP was 40 ft in diameter. Obviously, the void couldn’t be that large as the structure was still standing. Initially, Paradis and I had estimated it would take approximately 50 gallons of the BASF product to stop the leak.

In the end it took about four hours of continuous pumping and 90 gallons of product. Although no one knew the size of the hole at the bottom of the sump pit, the amount of MasterRoc MP 355 1K pumped meant the diameter of the void was quite a bit larger than the client had initially thought, as was the opening at the base of the pit. Through the use of the already installed valves on the sides of the inserted metal sleeve (which remained in place) we were able to determine we had also filled in the annular space between the sleeve and original pit. Upon completion not a single drop of water was exiting any of the valves — not one drop.