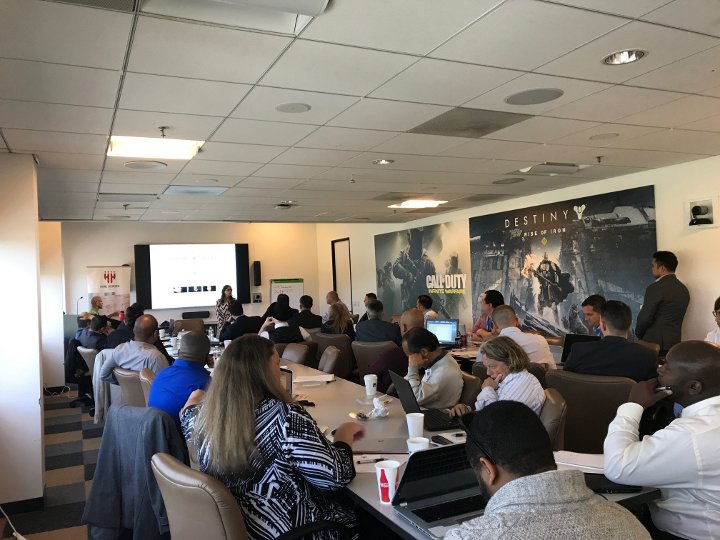 Hiring Veterans Into the Construction Industry

When an employer is looking to hire someone – from the lowest member on the local horizontal directional drilling (HDD) crew to the senior engineer on a multi-million-dollar sewer rehabilitation project – they are looking for several characteristics.

Some of the questions the employer might ask themselves include: Is this person able to learn new skills quickly? Are they a team player? Can they work with a wide variety of individuals? Are they efficient under pressure?

If you are the employer asking these questions and you’re looking for a new hire that checks all of these boxes, the simple solution is to hire a veteran.

“Veterans offer employers a unique set of technical, leadership and team skills developed through intense training and real-world experience,” said Peter J. Shelby, assistant secretary for VA’s Office of Human Resources and Administration, who is a retired U.S. Marine. “Another advantage of hiring veterans is that you get team members who have honed their professional abilities and been expected to optimize performance under stress conditions most civilians will never experience. Veterans come with a proven track record of stepping up and overcoming challenges in service to our country, at work and in their communities.” 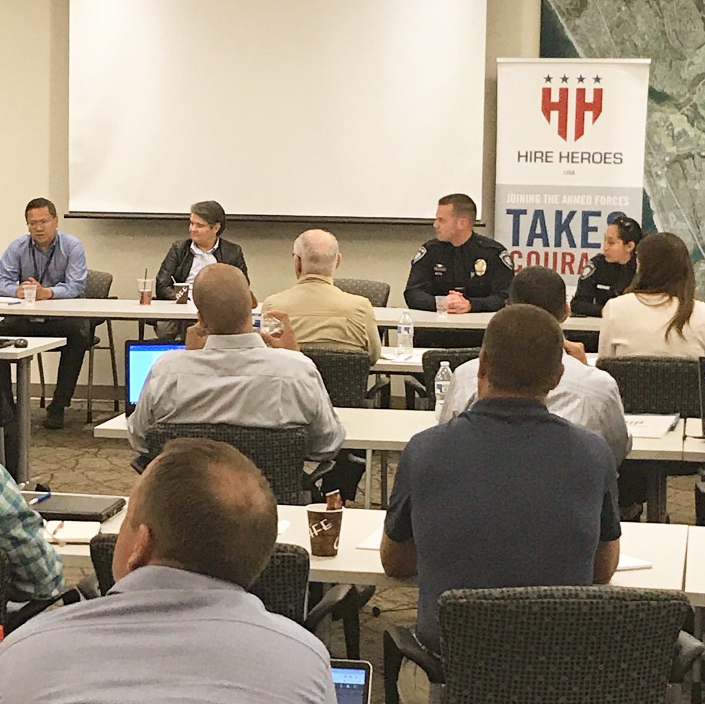 A Need for Workers

According to analysis of the most recent federal employment data by the Associated General Contractors of America, construction employment increased in 250 out of 358 metro areas between September 2016 and September 2017, declined in 56 and stagnated in 52.

“Construction firms in many parts of the country continue to expand to keep up with demand for their services,” said Ken Simonson, the association’s chief economist. “Yet construction growth would likely have been even more robust if contractors could find more qualified construction workers to hire.”

Association officials said that even as construction firms continue to expand, most firms report having a hard time finding qualified workers to hire, particularly for craft positions. They added that construction firms will likely add even more new jobs in many parts of the country if Congress and the President work together to increase funding and add flexibility to the federal career and technical education program known as the Perkins Act.

Sometimes getting veterans to these jobs requires a middleman and there is a myriad of organizations out there today that have made it their sole purpose to make sure military veterans, and in some cases their spouses, find jobs post-military in the civilian world.

Efforts by those organizations – both governmental agencies and non-governmental alike – in the last five years have definitely helped. The most recent figures from the United States Department of Labor Veterans’ Employment and Training Service indicate that the veteran unemployment rate was 3 percent in September 2017 – that’s a decrease from 4.3 percent in September 2016. According to the news release, that’s the lowest veteran unemployment rate since 2001.

As noteworthy as these number are, the organizations working with veterans will tell you that the situation remains critical and that finding gainful employment for veterans is still a challenge.

Realizing this need, in 2009, Activision Blizzard – developer of the hugely popular Call of Duty gaming series – launched the Call of Duty Endowment, a 501(c)(3) foundation to directly fund organizations that effectively get unemployed/underemployed veterans back to work.

Goldenberg serves as a captain in the Navy Reserve and was named to The Mighty 25: Veterans to watch in 2017 for his work in support of veteran employment.

According to Goldenberg, because there are more than 43,000 non-profits registered with the IRS, who list their work as helping veterans, the Call of Duty Endowment grantees are put through a rigorous screening program managed by the audit services firm Deloitte Consulting LLP. In the end, Call of Duty Endowment finds the highest-performing veterans employment service programs and helps them grow. 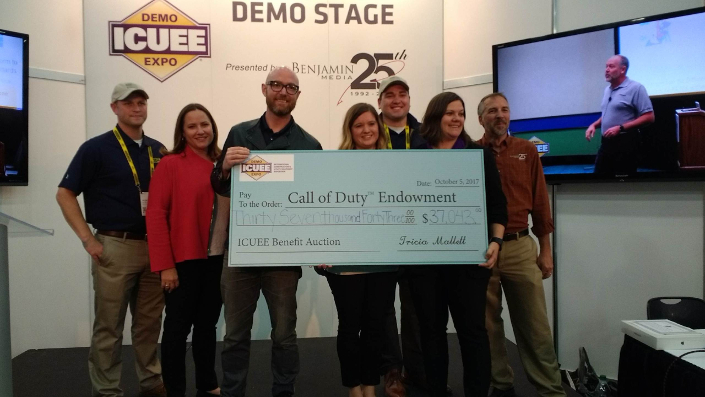 “Literally, every cent we raise goes to these organizations,” Goldenberg says. That is made possible because Activision Blizzard covers all of the Endowment’s overhead. “That is something a lot of folks look into, ‘How much of my donation is going to the cause?’ The benchmark is anything above 80 percent is good and we are at 100 percent.”

Funding for Call of Duty Endowment comes from four main buckets: digital items for sales in Activision Blizzard games; events such as the 2017 ICUEE auction, The Race to Prestige and retail partnerships; individual donations; and Activision Blizzard.

This year marked the second ICUEE Industry ‘Give-Back’ Auction for Call of Duty Endowment. The auction took place Oct. 5 on the ICUEE Demo Stage Presented by Benjamin Media Inc. and was co-sponsored by Benjamin Media and J.J. Kane Auctioneers. The auction, plus onsite donations, to benefit the organization raised more than $37,000.

One of the strongly vetted organizations that the Endowment works with is Atlanta-based Hire Heroes USA. The organization’s mission is to empower U.S. military members, veterans and their spouses to succeed in a civilian workforce. As of October, Hire Heroes USA has helped more than 20,000 service members and spouses get new jobs since 2007. Of those placements, 83 percent (approximately 16,600) have been in the last three years.

“We are a client-side organization, we work with the veteran. That is our entire goal,” says Christopher Plamp, Hire Heroes USA interim CEO and a retired U.S. Air Force colonel. The bulk of Hire Heroes USA’s work is with the client, though it does partner with about 400 companies that have “vet-friendly” hiring programs.

Hire Heroes USA links the client with a transition specialist to assess what the client wants to do, where they want to work, if they can move and so on. They also help the client craft a resume – one that translates the military skills and training to civilian speak so a human resources manager can read it and know who the person is. Additionally, they help create a LinkedIn profile, help them begin networking and prep for interviews. Unlike some other programs, Hire Heroes USA sticks with the client until they get a job.

“We stick with them because it is when the interview does not go well or when the resume is not getting hits or when they start interviewing into a career field and they discover it is not the one they want or when a company is not returning their calls and they need advice on how to continue on,” Plamp says. “They also need someone to talk to and reassure them that this is the way the job search goes and you have to push through this to get to the end.”

Though not unique, Hire Heroes USA takes pride in the fact that it also works with the spouses, because, as Plamp points out, it is as though the military spouse also served. In many cases, the spouse had to move on short notice, handle switching children between schools and deal with the home side issues while the military member was deployed. Because of this, the spouse faces challenges like a resume with gaps of unemployment, working jobs below their skill level, gaps in training and so on.

“The fact that this is an all-volunteer force, taking care of the family is critically important to the long-term stability of our military,” Plamp says. “A lot of the reasons people get out of the military or decide not to join is because of how the family is cared for and how the spouses do.”

The Importance of Hiring Veterans

“No. 1 it’s good for the country. If we want a strong defense, we need a strong all-volunteer force. Part of what people look at when they are going to serve in the military is their ability to find work afterward and how they are appreciated for the service that they did do,” Plamp says. “There is a more philosophical view that to take care of the all-volunteer force it is important for companies across the United States to hire the veterans and give them that mission and paycheck and service afterward.” 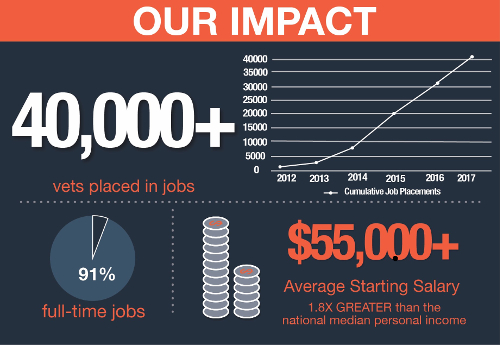 When a company hires veterans, they are getting a cross-section of America. They are also dipping into a pool of potential employees who have already been vetted. According to Goldenberg, three out of four people who walk into a recruiting office are turned away, so even at the most unskilled military job, that person is readier to do the work than three out of four Americans.

If that potential new hire is a person who was in the military through to an honorable discharge, the potential employer is getting a person who is drug free, knows how to show up to work on time, has a strong work ethic, is a mission-oriented problem solver who has worked through adversity in tough environments and knows how to work well with others from a diverse background. And that, Goldenberg adds, is at the most basic level.

“The data is super clear. There was a study done by CEB of 1 million-plus Fortune 500 employees and it shows us that veterans make better employees than non-veteran employees. They are 3 percent more likely to be retained and 4 percent more productive,” Goldenberg says.

Plamp adds that, and it is especially important in the construction industry, the employers are getting a new hire who has experience working around heavy equipment and who knows how know how to read a technical manual. They also know how to integrate safety into their work environment. This makes them better-prepared for working in tough environments and conditions that are common place in the construction world.

What Can Potential Employers Do?

What can an industry that so desperately needs employees to keep up with project demand do to attract more veterans?

Plamp offers three suggestions. First and foremost be overt about the jobs available, the potential for growth and that this can be a career.

“I think, like almost any industry, people do not understand the full spectrum of jobs available within the construction industry,” Plamp says. “It is very wide there are more jobs that people don’t think about.”

Second, once the information about available jobs is out there, the company should make it known that they are looking to hire veterans, either through online campaigns, attending veteran-specific career fairs and partnering with organizations like Hire Heroes USA.” 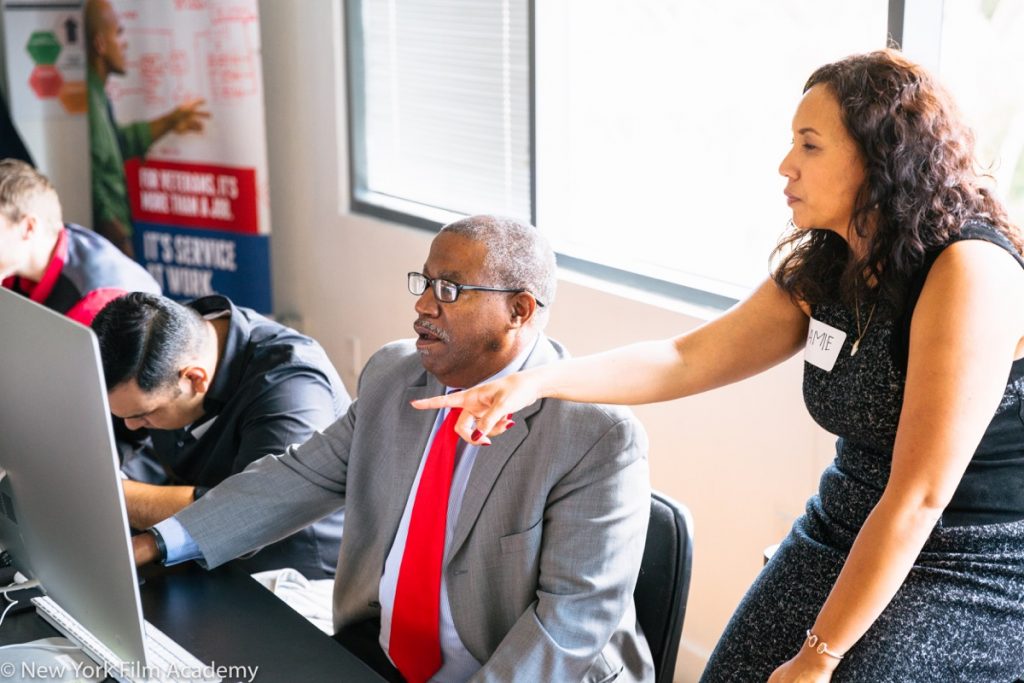 Hire Heroes USA is one of 10 primary grantees that works with the Call of Duty Endowment.

Third, and this speaks to retaining veterans. Plamp suggest creating an employee-led veterans group. The group would work with veterans internally as they transition to a role in the civilian workforce and the group could also help direct the company’s veteran hiring initiatives.

“We’ve seen mentoring programs work well in other industries. We have a partner in the consulting industry and they were having trouble with retention,” Plamp says. “One of the big things they did is set up a mentor of a veteran who had been with the company to the inbound hire. Their retention rate shot up based on the onboarding process, the new hire had someone to go to if they had questions. You have to remember that in many of these instances, this is the veteran’s first civilian job.”

Goldenberg urged companies – especially those people directly in charge of hiring – to be more flexible and open with the people interviewed.

“I am not telling people who they should hire. What I am saying is, if you interview five people, see if one could be a veteran, even if the skillset isn’t a perfect match,” Goldenberg says. “Because, even if they don’t get the job, it is a great experience for them to have the interview.”