A Refresher on Electrofusion Preparation

Anyone who has made it to adulthood has no doubt heard the saying, “cleanliness is next to godliness,” more than once. Granted that saying is more to do with personal cleanliness, but the idea behind it holds true on every jobsite because cleanliness and safety go hand-in-hand.

It is crucial to keep in mind the importance of cleanliness especially when dealing with horizontal directional drilling (HDD) work. In particular, the successful completion of electrofusion bonding on pipeline joints. Unfortunately, sometimes cleanliness gets unintentionally tossed out the window when crews arrive at a jobsite. Or the site can be perfectly clean, but the worker unknowingly introduces a contaminant where it does not belong.

Prompted by a study published in 2017 that addressed bonding issues at saddle taps along a distribution pipeline due to the presence of bentonite, the Distribution Contractors Association (DCA) featured just such a topic at its 2018 Utility Contractor Workshop, co-hosted with the American Gas Association (AGA).

The crux of the discussion was that while other contaminants (lubricants, soil, etc.) are visible to the eye on polyethylene gas distribution lines, bentonite – the crucial component in drilling mud – is not. The same holds true for polyethylene pipe used in other HDD installations.


“It has long been known that fine particulates at the fusion interface can interfere with the heat fusion process,” says Jeff Wright, director of technical services at Georg Fischer Central Plastics LLC. The company supplies electrofusion fittings and equipment and Dan Rosinski, its national sales manager, gas, was a member on the DCA-AGA panel discussion. 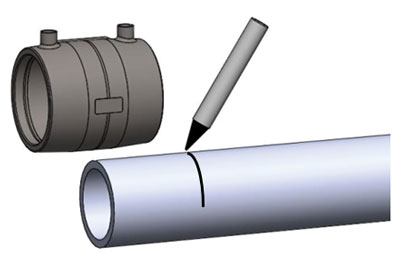 For the electrofusion process to create solid joints, these contaminants must be removed from the pipe and the pipe needs to be scraped, creating a virgin surface for the fusion to take place. The other contaminants, if they were to enter the cleaned and scraped area, would be seen with the naked eye. Bentonite, because of its molecular properties, might not, thus leading to weak electrofusion joints. 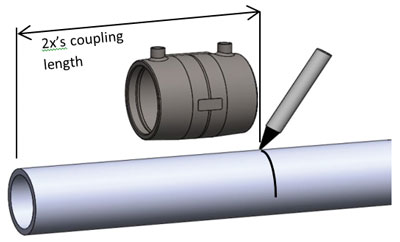 Clean the pipe with water in a section that is at least two times the length of the coupling and use isopropyl alcohol in addition to water in the area where the coupling is attached.

“Since heat fusion occurs because polyethylene molecular chains entangle with each other when melted, anything that can block that chain entanglement will have a similar effect,” Wright says. “For example, talc is commonly used during laboratory testing as an intentionally introduced flaw during testing of fusion strength.”


Best practices call for cleaning the pipe first with clean water and then isopropyl alcohol to remove the contaminants in an area. Georg Fischer Central Plastics recently updated its manual to include cleaning an area that is two to three times the length of the electrofusion coupling or saddle – depending on the type of fusion process.

At the end of the hour-long DCA-AGA panel discussion, which included manufacturers and suppliers, contractors and system owners, the consensus was that though this appeared to be an isolated situation it is important to keep a watchful eye and it is always good to properly educate, or re-educate, employees.

“It likely isn’t isolated. However, it isn’t common either. The use of drilling fluids is very common, as is electrofusion joining of polyethylene pipe for the past 40 years. There are millions of electrofusion joints made each year,” Wright says. “If the issue were widespread there would likely be more reports of ‘unexplained’ problems with electrofusion joints. While the potential for contamination of the pipe surface with bentonite is there, awareness of the importance of pipe preparation and following a robust installation procedure that prevents cross-contamination has been proven to mitigate that concern.”

Discussed by the panel was a vigilance to cleaning, marking, scraping and fusing the pipe immediately after.

“This issue, along with feedback and cooperation with our customers that make electrofusion joints every day, helps us to identify where procedures can be improved and where to focus efforts in training and education of the installer,” Wright says. “We had already included a pre-cleaning procedure into our installation procedures, as well as other changes to discourage the use of certain pipe preparation tools and practices when something better was available.”

As long as these steps are taken the fusion will be successful. According to Wright, there are efforts under way at ASTM to develop better practices and requirements for electrofusion joining. It is up to the utility owners and contractors to make sure the procedures are followed.

“We believe it comes down to proper cleanliness and preparation of the pipe. We have addressed this issue during our annual training and safety meetings, as well as daily toolbox talks. Our in-house QA/QC personnel discuss it with the crews during their inspections, as well,” says Pete Fojtik, general manager, gas distribution, at Michels Corp. Fojtik was also part of the DCA-AGA panel discussion.

When attaching a saddle fitting, you clean, with water, an area that is three times the length of the fitting and use alcohol to clean in the area that
will be scraped.

Fotjik adds that training, training and more training is the No. 1 way to prevent this issue from happening again. “Ensure your fusers and crews are trained in the proper cleaning, scraping and fusing procedures,” he says.

Though not a major issue for the industry, it can be, as Wright points out, if lessons are not learned. Knowing and implementing the industry best practices when electrofusing will prevent problems like this from occurring.

“Training and experience is vital to preventing issues,” Wright says. “It is relatively easy to write instructions and tell an installer what he should do. However, if it isn’t understood why he is doing what he is doing, it can be easy to take a short cut or to simply misunderstand the importance of something as simple as cleaning pipe.”

Mike Kezdi is an associate editor of Trenchless Technology.