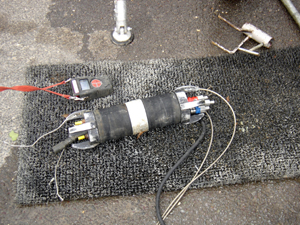 Going back to ancient history, archaeologists have uncovered pipe systems that were simply butt end pipes that were laid end-to-end and the joint sealed with whatever seemed appropriate. Given that many of these pipes were used only by those with wealth, the odd leaky joint was not too much of a problem, as there was always someone around to see to any spillage.

However, as populations grew and it became more obvious that good sanitation played a significant part maintaining the health of any population, more “fit for purpose pipes” and, therefore, jointing systems were developed that would actually keep the vast majority of flows within the pipe and transport them to the desired destination, even if it was only a river outfall.

Over many years, different joint types have been developed including mortar/gasket joints, O-ring rubber seals, and, more recently, elastomeric seals, which are often profiled to give a better final seal.

One of the earliest joint types developed, which has been used for more than 100 years, was the mortar and gasket joint, although it is understood that some joints may have been simply mortar sealed without a gasket. Pipe sections were developed with spigot and socket ends, which would fit neatly into each other. The joint was made with a gasket that was positioned between the bell-shape socket and the tapered spigot. The joint was then made watertight by sealing the outside of the gasket with mortar.

If correctly installed in situations where ground movement or high loading was not expected, these joints proved quite effective. Their performance did depend a great deal on the skill of the crew laying the pipe, its
alignment and correct bedding of the pipes during the build. If anyone, or a combination, of these installation requirements was incorrect, then problems could be expected later.

One of the major changes affecting this type of joint performance has been the growth in vehicle traffic. When most of this type of pipe was designed and laid, the heaviest vehicle running on the roads above a pipeline was likely to be a large cart — not a 40 t juggernaut. So, in most instances, even where a pipe was laid correctly, because of the inherent stiffness of the mortar joint, changes in loading of this scale can lead to cracking of the mortar and possible displacement of the joint. This, in turn, results in problems such as exfiltration, infiltration or root intrusion.

Loading and ground movement are not the only cause of mortar joint failure. The changing chemistry in effluent flows can also play a significant part in joint problems. Many effluent flows are now a great deal more chemically aggressive and chemical reactions can cause breakdown of the gasket material and/or weakening of the mortar. This can occur even in the best laid pipes in stable ground conditions. Vegetation root ingress in search of water is also capable of penetrating even well-made joints.

So it should not be surprising that problems of infiltration or exfiltration from older pipelines jointed using mortar are often associated as much with the joint as with damage or deterioration of the body of the pipe itself.

In the middle of the last century, pipe joints were developed that utilized rubber O-rings to make the seal. This was introduced to make a more flexible joint that would be less susceptible to load changes and ground movement. However, the rubber was still vulnerable to chemical reaction and deteriorates over time leading to joint breakdown.

So, by the 1960s, new elastomeric seals were developed to replace the more sensitive rubber gaskets. Since then, both the design and durability of pipes and their end seals have been significantly improved and modified to create a plethora of pipe joint seals, which are utilized in both trenched and trenchless applications.

However even modern joint seals, while considerably improving on the durability of their predecessors, can still prematurely fail. In many instances, the failure of a joint seal is caused not so much by the joint itself but in how it has been installed. Pipe misalignment, poor pipe bedding, the use of dubious backfill can cause joints to fail. Even something as simple as the incorrect positioning of the seal when placing it on the pipe end can lead to early failure.

So, despite now having centuries of pipeline installation under engineers’ belts, it cannot be stressed enough that good training, attention to detail, good supervision and the use of quality materials from reliable suppliers remain the key requirements for a successful life expectancy for a jointed gravity pipe.

Unfortunately, quality control to the standards that are expected today has only recently become the norm, in comparison to the life of pipes laid with an expected service life of 50 to 70 years. Today’s engineers are left to manage older pipelines and joints, which although less than half way through their intended working lives, do not always meet the exacting requirements of modern pipeline installations.

As previously mentioned, cracking, displacement, chemical attack and root intrusion all play their part in giving challenges to engineers with the pipelines in the ground that they have to deal with today.

For much of the past 40 years, the solution has been relatively simple: dig up the pipeline and replace it with new pipes using better, modern joint seals. But even that has not always worked. In some cases, even relatively younger pipelines (less than 25 percent of service life) are already showing signs of need for repair or replacement.

Sadly, there remains a stubborn allegiance to the traditional excavate-and-replace option that is still widely used around the globe, particularly where manual labor is cheap and environmental considerations are ignored. Slowly, and not without a fair amount of difficult political persuasion, there are today a number of remote access, trenchless joint repair and renovation options that have been developed over the past 30 years and are now becoming widely accepted.

One of the simplest forms of joint repair, where the joint is not misaligned but is in a pipeline of man-entry size, is to enter and re-point the joint from the inside by hand. In the modern world, with confined space safety requirements and the support equipment, training and back-up that confined space working needs, this is not always the most cost-effective option.

Probably the next most widely used pipeline renovation techniques by their nature deal with the existing joints as part of the complete operation. Manhole-to-manhole lining using cured-in-place pipe (CIPP) techniques or other full bore lining options such as sliplining, modified sliplining (fold-and-form type liners), GRP segmental lining and spiral wound lining techniques all seal the existing joints, as well as the pipe sections themselves. Of course the disadvantage here is that the whole pipeline is renovated when possibly only localized joint repair is actually needed. This is the reason why proper pipeline condition assessments should precede any work and the best technique for dealing with the aggregate of the faults established should be established early in the pipeline survey and planning stages.

A well established alternate technique is whole pipeline flooding using a mixture of chemicals that penetrate defects and faulty joints and then cure to create a seal. These techniques have the advantage of using the leaks themselves to establish where the chemicals penetrate and seal the defect points but they do require the whole pipeline to be taken out of service for the duration of the installation.

But what if the leak is identified and only a localized or point repair is required? Here, there are several options. Using complete lining options, the first technique is to use CIPP. But with CIPP, the liner section is positioned using an inflatable bladder that holds the resin impregnated liner in position over the point in the pipeline or at the joint where it is required while curing takes place. Removal of the bladder after curing leaves the ‘patch’ in position over the defect sealing it. CIPP is limited to situations where, after curing, the liner patch does not have a circular void between the liner and the wall of the host pipe, such as other lining applications developed for use in high infiltration manhole-to-manhole situations over the past few years.
Another physical liner that can be utilized is the elastomeric seal, which comprised a rubberized collar that sits over the joint or defect and is held in place by an expanding and locking stainless steel spring clip. These will not only seal the joint or defect but offer at a later stage, the option to complete a full lining operation without the need to remove the seal. This option can also sometimes be used as preparation work for a full lining where infiltration is high and needs to be stopped before lining can be undertaken.

The use of localized chemical sealing or injection is experiencing a strong revival using the principles of chemical sealing but without the drawback of having to take the complete pipeline out of use. A recent development for improving the flexibility of the sealing resin in conditions in which the repair dries out was awarded the ISTT No-Dig Product Award for 2007. These robotic repair systems normally require a skilled
operator to maneuver the robot along the pipe to the required position. The robot is then used to clean and prepare the joint or defect to enable a resin to be injected through the robot (using either an on-board pre-prepared resin sack or a supply from the surface provided along an umbilical pipe) into the joint position. The robot then has articulated arms that are used to smooth the injected gel to match with the required pipe surface.

Alternatively, the resin or gel injection technique utilizes a specially designed inflatable bladder, which is positioned using CCTV, like the robotic system, over the defective joint. The bladder (also known as a packer) is then inflated so that its end sections seal against the sound pipe walls on either side of the joint. Resin (gel) is then injected through the packer under pressure so that it enters and fills the defective joint. After allowing a calculated setting time, the packer is deflated and removed leaving the joint sealed.

Of course in most instances the choice of renovation technique will dictate the cost of the solution. Most point repair systems are less expensive on an individual installation basis but only up to a point. If the volume of repairs is high, it may be more cost-effective to utilize manhole-to-manhole techniques and renovate the whole pipe rather then multiples of local repairs.

Where root intrusion is a problem, there are many techniques that can be used to remove them using bladed cutters, high-pressure water cutters, scrapers etc. Many of the systems of renovation available can be installed using root inhibiting chemicals or simply prevent re-growth into to the main pipeline. A great deal of research has been undertaken into the biology of root intrusion and often it appears that in the modern world prevention is better than cure. One of the major points to emerge is that good planning, not only of the pipeline but also of the surrounding landscaping and planting, can play as much a part in preventing root problems as simply dealing with them when it occurs. In life cycle terms, prevention is more cost-effective than the cure.

Ian Clarke is president of NoDig Media Services, based in the United Kingdom.