Force Mains Are a Growing Concern for Utilities, an Opportunity for Trenchless 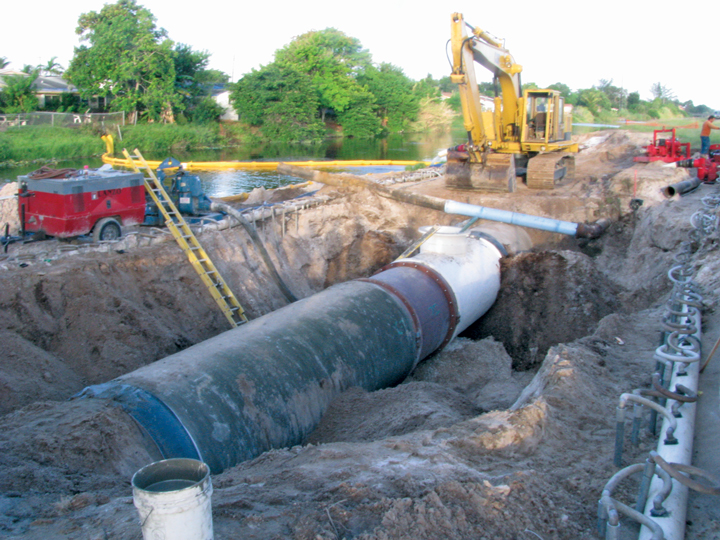 For most of its history, the trenchless pipe relining and inspection market has centered on gravity sewer pipes. That seems quite natural, considering the fact that the cured-in-place pipe (CIPP) process — the forerunner of trenchless relining — was engineered specifically for gravity sewers.

In the United States, U.S. EPA consent decrees enforcing the Clean Water Act mandated that sewer improvements be made across the country to reduce the number of sewer overflows into the environment. This helped fuel the growth of trenchless relining, even through the most recent economic downturn that crippled many industries. Aiding in this development is the fact that sewers do not have the rigorous testing and approval process needed to meet drinking water standards.

But throughout the growth and development of the trenchless relining market, utilities, engineers, contractors and suppliers alike recognized the need to develop products for pressure pipes, including drinking water systems and sewer force mains. These vital infrastructure components, like their gravity sewer brethren, are aging and in need of attention.

Gradually, progress has been made in the area of trenchless relining for drinking water distribution system pipes through the efforts of companies including Insituform, Sanexen and Sekisui SPR. Beginning in the mid-2000s, CIPP for drinking water rehabilitation started being used in the United States — some 30 years after its introduction into the gravity sewer market. While still in its infancy in the United States, interest in water main relining is growing and more and more utilities are taking on projects to meet the mounting needs.
That leaves the issue of sewer force mains. The tools for assessing and repairing force mains have been limited compared to the gravity sewer market, but utility owners are beginning to take a closer look at their force mains.

“Force mains have long been ignored but they are aging and represent an important part of the overall network because of their high consequence of failure,” said Dr. Sunil Sinha, associate professor of civil and environmental engineering at Virginia Tech and director of the Sustainable Water Infrastructure Management (SWIM) Center. “Utilities are recognizing that they have to pay attention to the force mains. They are exploring options to inspect and assess the condition of the force mains and look at ways of repairing them.”
According to the “State of Technology Report for Force Main Rehabilitation” (EPA, 2010), sewer force mains comprise about 7.5 percent of wastewater pipes. Commonly, these force mains are constructed of materials including ductile iron, cast iron, steel, PVC and concrete pressure pipe — many of which are subject to internal corrosion due to materials present in the sewage they convey.

As infrastructure asset management plans, which take into account asset criticality, continue to evolve at utilities throughout the United States, force mains are increasingly becoming the focus of attention. The EPA report indicates that we are just scratching the surface with regard to force main rehabilitation, stating that roughly one-tenth of 1 percent of U.S. force mains have been renewed. 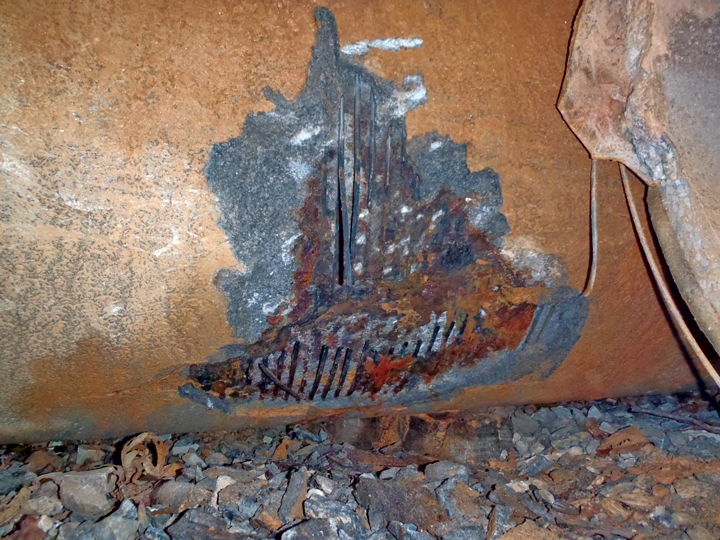 Force Main Condition Assessment
As with any trenchless repair, understanding what you’re up against is the No. 1 key to project success. In the case of force main rehab, that means pipeline inspection and condition assessment.

Sometimes even locating the pipes can be tricky, according to John Marciszewski, director of business development for Echologics. “The first challenge is often locating the pipes. Unlike water mains where you have access points like hydrants along the pipeline, you don’t have that with sewer force mains. They are forgotten infrastructure. Some people have good records but for the most part they don’t. And, if they do have drawings, there are no guarantees as to the accuracy of the actual installation.”

Force main condition assessment is complicated by the fact that they typically are not part of redundant systems and cannot easily be taken out of service for a detailed inspection. Visual inspection of sewer force mains is difficult because of the nature of the effluent, often making it opaque to a CCTV camera.

Additionally, even if a force main can be taken out of service long enough to run a camera through, grease and sludge buildup —even after cleaning — can obscure evidence of pipe defects.

“Twenty years ago, no one was looking at force mains because technologies were not available to assess their condition,” said Bob Morrison of Jason Consultants (a subsidiary of Pure Technologies), who was one of the principal authors of the 2010 EPA report. “The industry has seen a need and has been adopting technologies to help communities meet their needs. And there are more technologies coming into the sector.”
So what can you do? Echologics and Pure Technologies both have a long involvement with water main condition assessment and are applying some of their tools on sewer force mains. While there are significant differences between sewer force mains and water mains — the cyclic nature of the pressure, corrosive nature of the effluent — there are commonalities — pipe materials, pressurized environment — that allow existing tools to give a glimpse at the condition of the sewer force mains.

The first step in conditional assessment is a desktop study. What is the material of the pipe? What is the age? What is its elevation (pipe sections at higher elevations may be more susceptible to air pockets)? What is its service and repair history?

“By doing leak detection, we are able to locate gas pockets in the force main — and that is very important because hydrogen sulfide gases can develop in those pockets and accelerate corrosion to pipes that are unprotected and exposed,” Morrison said.

For areas of the pipelines that show leaks or areas of gas pockets — and potential advanced corrosion — further testing is required, oftentimes requiring that the pipe be exposed for closer examination. Various ultrasonic and electromagnetic tools are available to assess the remaining wall thickness of concrete and ferrous pipes, providing information to gauge the remaining useful like of the pipe.

For plastic pipe — PVC and HDPE — corrosion doesn’t play as big of a role as those materials are basically inert. What does matter, particularly for PVC, is the cyclic nature of the pressure that it is subjected to over the course of its lifetime, Morrison said.

“The plastic pipes inherently don’t corrode so they are not affected by the wastewater effluent and they are not susceptible to external galvanic or electrochemical corrosion from the soil,” he said. “The key factor in their longevity is their operational environment — the pressures and the cycling of flow that they are exposed to. The lifetime of a PVC water pipe is fairly well known, based on long-term sustained pressure tests. Sewer force mains can be different as these pipes are subjected to cyclic pressure. So if you know how many cycles a day it is subjected to, what the pressures amplitudes are and the age of the pipe, you can calculate an estimate of the life expectancy.”

“We know there must be leaking force mains but, historically, they are not detected unless they surface,” Marciszewski said. “With proactive leak and gas pocket detection, leaks can be found at an early stage, before they cause environmental damage. Using ePulse, we found three active leaks at a chemical industrial site in New Jersey back in 2011.”

Main Rehabilitation
Once problem areas within the pipeline have been identified, the next step is repairing the pipe. For large-diameter pipes, there are more repair options available. One common method of internal repair of pressure pipe is through the use of fiber-reinforced polymer (FRP) from companies like Fibrwrap and QuakeWrap. This process involves bonding the polymer to the inside of a host pipe to repair the pipe and provide structural capabilities with very little impact of pipe capacity.

For non-man entry pipes, there are conventional trenchless relining methods that provide structural capabilities and which could be used in sewer force main environments. For CIPP, there are Insituform (Insituform Main), Sanexen (Aqua-Pipe) and Sekisui SPR (NordiTube). Additionally, sliplining and close-fit lining techniques could also be used for trenchless relining of sewer force mains.

However, access to the pipe can be more difficult when addressing sewer force mains, unlike the gravity flow sewer mains that run under city streets and have access by manholes at regular intervals. Again, the issue of decommissioning a force main to allow for prep and repair is also an issue. According to Morrison, to date very little trenchless rehab of sewer force mains has occurred, but interest is growing.

“There have been some failures of force mains, and when there is a failure, it is a much more significant event compared to water mains — people don’t like millions of gallons of wastewater flowing through the streets,” Morrison said. “We are seeing more of an interest in utilities addressing their force mains and making sure they are inspected. In some cases it is EPA-mandated through consent decrees, and, in other cases, the utilities are taking the initiative themselves.”

Force mains comprise only a small portion of wastewater pipes, but they represent a critical link between the collection system and treatment plant or between basins that are vital to the functioning of the overall system. Trenchless inspection and rehabilitation tools continue to evolve and be developed to meet this demand.

Jim Rush is editor of Trenchless Technology.
Most Popular Posts