Deteriorating, leaking sewer lines are common in Los Angeles where one-fifth of the city’s water pipes were installed before 1931. But when a section of the North Outfall Sewer (NOS) near the intersection of Avenue 19 and Humboldt Street in downtown LA threatened to collapse, swift action was needed.

Built in the early 1900s, the NOS passes through residential and commercial neighborhoods in the central Los Angeles area. Due to its location, a sewer line break would be catastrophic.

The NOS Unit 12 line is near the 110 and 5 freeways, right next to the LA River. It’s also very close to a high-voltage transmission tower and runs under the Metrolink commuter train tracks.

Repairs on about a half-mile stretch of the 48-in.-wide pipe were planned for 2020, but the risk of a sinkhole under the train tracks meant expediting the $20 million-plus project. In November 2018, the city of Los Angeles developed a contingency plan to provide emergency response services in the event of a sewage spill or further underground structural failures. Xylem Rental Solutions worked with the contractor, Vido Artukovich & Sons, and the City to implement the plan.

“If the void got worse, the transmission tower was in danger of collapsing causing power lines to fall onto the 110 freeway,” said Nate Warren, a sales engineer with Xylem.

Once the contingency plan was developed, the contractor engaged Xylem to develop a temporary sewer bypass system to route sewage around the repair site. Designing the temporary bypass system proved complicated as crews could not dig down to the deteriorating pipeline without threatening nearby infrastructure. When project planning began in January 2019, the Xylem team discovered the sewer pipeline was buried 50 ft deep, rather than 30 ft as initially thought.

“This was a large and very technically challenging bypass,” Warren said.

Designing and installing the suction pit for the bypass pumping operation was equally challenging because it was so deep. Xylem, with help from contractor Vido Artukovich & Son, Inc. and their project manager Anthony Artukovich, had to incorporate a process to allow construction crew members to enter the pit to make sewer repairs without compromising safety.

The significant depth of the pit also meant installing steel support braces for reinforcement, narrowing the diameter of the pit; however, design specifications required adequate spacing between pumps to maintain proper flow.

“If the pumps were too close they would fight each other for flow,” Warren explained.

With the bypass pipeline pushing out into Avenue 19, a popular alternate route for those commuting to suburbs just north of LA like Burbank and Glendale, special considerations also had to be made to avoid disrupting traffic. 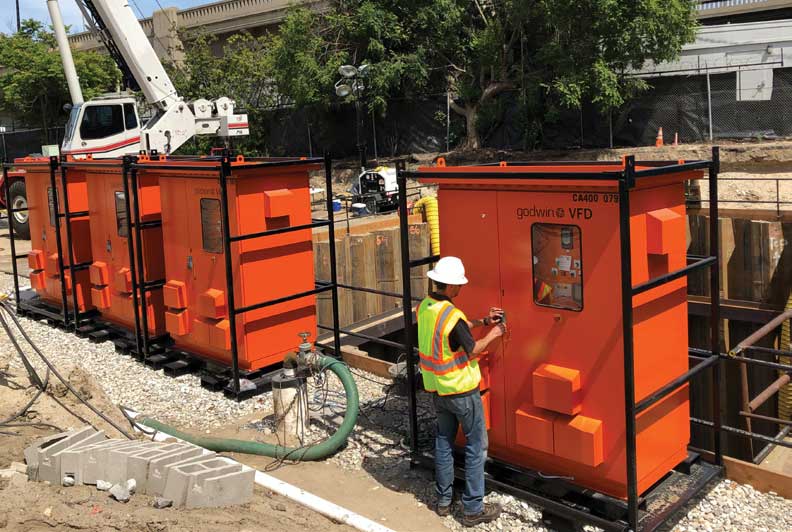 Despite a multitude of challenges, Xylem designed and implemented, with Artukovich, a successful temporary bypass system. The system, which moves a peak flow of 40 million gallons per day (MGD), runs from Riverside Drive and San Fernando Road to Avenue 19 near Humboldt Street.

While the main 40 MGD bypass system was being constructed a 20-ft suction pit was excavated over the 35-ft deep sewer on Avenue 19 to stage Flygt 3531, 335HP, 24-in. electric submersible sewage pumps. The priming system is powered by a diesel air compressor, and Godwin GHPU90 power packs drive the submersible pumps. This solution allowed Xylem to install a 24 MGD pumping system in a small working area.

The 40 MGD bypass system consisted of four Flygt 3531 electric submersible sewage pumps. Two pumps were primary and two pumps were dedicated standby. Due to the space constraints, the Xylem team staged the pumps in an alternating pattern, making the first and third pumps the primary pumps and the second and fourth pumps the standby pumps.

Four 2,500-ft lines of 24-in. HDPE pipe run from each pump to an alternate sewer trunk line called the Northeast Interceptor Sewer. Burying the pipe under the street ensured that traffic flow along Avenue 19 is not impeded.

In order to meet fluctuating flow conditions and address ragging concerns, the Xylem team opted to mount the Flygt 3531 pumps on a slide rail system typically used in permanent pump system designs. In a standard bypass scenario, a special crane must be used to pull the piping and the pump at the same time. Each pump is fitted with a Godwin variable frequency drive (VFD) to optimize energy consumption and allow the pumps to automatically start and stop to maintain a consistent sewer level. Each VFD was networked together so that they all could be controlled by a Godwin Advanced Remote Monitoring control panel. The wireless technology provides remote monitoring and enabled control of the pump from any smartphone, tablet or desktop computer. The control panel also provided clog detection.

When a pump started to clog, the pump’s motor amps would rise and the flow would drop. The system would then alert pump watch personnel who addressed the clog by following a step-by-step plan of backflushing the pump. The process took less than five minutes during which the standby pumps automatically started and took over pumping.

“From wherever I am, I can monitor the pump performance and communicate to our pump watch team when we need to backflush pumps to prevent ragging,” said Warren.

Two diesel generators were set up to power the pumps, one to power the two submersible pumps and a second one to act as a standby. In the event that the primary generator failed, the standby generator would automatically start and take over supplying primary power to the bypass system. The combination of reliable primary pumps, supported by backup pumps, a redundancy system and remote monitoring and control of the operation provided confidence and peace of mind for the city managers.

“Xylem was able to optimize the bypass system and allow the city and the contractor to monitor flow rates and responses from anywhere in real time,” said Warren.

By coming to the table with a tailored solution complemented by best-in- class technology, Xylem provided the most cost-effective and efficient option for an incredibly challenging sewer bypass project.