The airport is currently undergoing an extensive expansion project. As part of the current phase, which includes an expansion of Concourse A, as well as expanding the terminal lobby, 18-in. and 8-in. gravity sewer pipe needed to be laid in — and the work needed to be done in a way not to disrupt airport operations for workers, passengers and traffic flow. These gravity sewers are to collect from two pump stations that serve the rental car companies in the basement of the hourly deck, as well as collect from the Concourse A and terminal lobby expansions. The local outfall sewer owned by Charlotte Water currently passes beneath the existing terminal, several concourses and ramp areas at depths exceeding 40 ft.

CDIA is a civil-military international airport in Charlotte, North Carolina, that was built in 1935 (known then as Charlotte Municipal Airport). Not just a small blip on the airport radar, CDIA covers more than 5,500 acres of land and as of 2018 it was the 10th busiest airport in the United States — with more than 46 million passengers — and fifth by aircraft movements.

Fuller & Co. Construction is owned and founded by Bobby Fuller, an experienced auger boring and hand tunneling contractor based near Charlotte; the contractor took on this project, which included eight bores ranging in length 117 to 411 ft. What makes this project challenging is that it is entirely being done using auger boring. In fact, the initial design called for just five auger bores, with the remaining work done using open cut. The contractor weighed the high risk and knew it all had to be done using auger boring from cost, safety and timeframe perspectives. Other trenchless methods such as horizontal directional drilling (HDD) and microtunneling were ruled out due to the depth of the bores and space limitations at the site.

“[We] evaluated the original plan of laying the sewer along one lane of the FAA tower access road and determined that the cave-in risk from using conventional trench shields would likely result in compromising access to the FAA control tower access due to integrity loss of the roadway,” says Fuller business manager Jarred Fuller. Constructing the project using open cut would have also risked impacting the access road that led to the food and beverage loading dock area — something not acceptable.

“At this airport, you’ve got airplanes and food and food is the second most profitable avenue at the airport,” Fuller says. “Everywhere on this jobsite, everywhere you touch is mission critical. Every five minutes you have a plane taking off and blowing 30 to 50 mph winds through your site, blowing your fence down, blowing your traffic control down. We weren’t out on some parking lot on the back 40. We were up against the airport.” 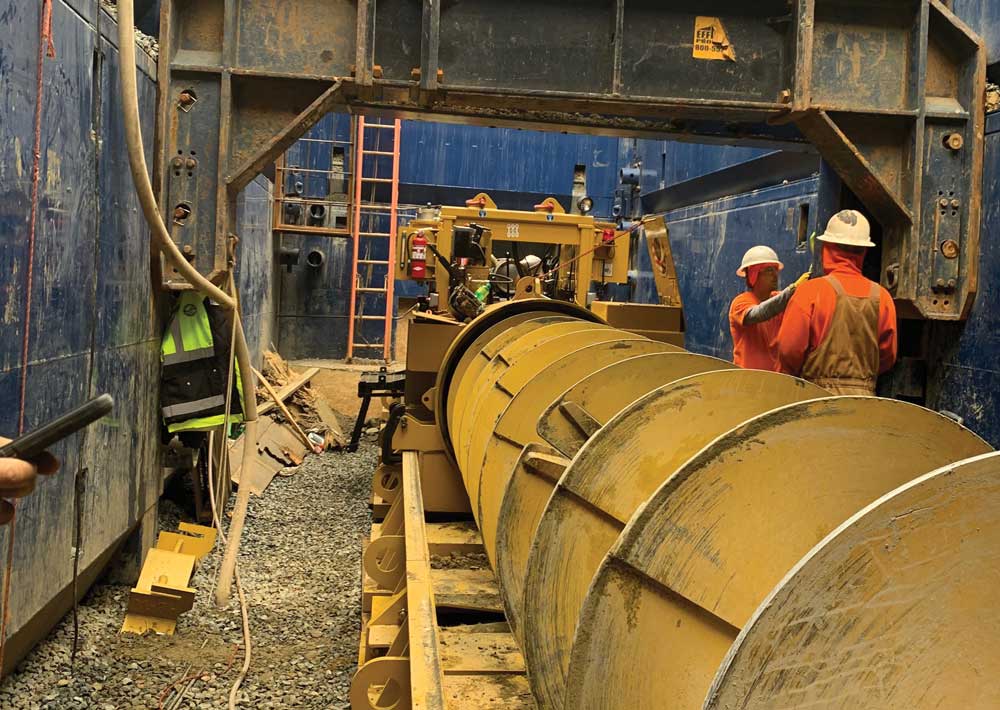 This $5.5 million auger boring project is expected to be finished before the end of 2019. He describes it as one of the most challenging and most management intensive of his career. Fuller’s team has been at the site since December 2018, when they readied the first pit for boring starting after the holidays. The entire job was bored using two Michael Byrne D48-950 auger boring machines with Michael Byrne tooling and heads. Casing was provided by Precision Pipe and Products and casing spacers by CCI Piping Systems.


Among the challenges for the project was the ever-present airplanes flying overhead and vehicle traffic heading to and from the hourly parking deck and the high priority traffic to and from the sole FAA control tower and loading dock. This was especially true when constructing the first boring pit and crews were already dealing with pre-Christmas travel volume. “The pit was excavated and spoil exported from the site in one day under live traffic conditions and a 165-ton crane used to set boxes while keeping distance from the unstable soil structure,” Fuller says. “Use of the crane was made difficult by the planes taxiing away from the nearby Concourse, causing 30 to 50 mph wind gusts from the engines.”

This project was also a challenge due to the strict line and grade the bores needed to hit in difficult and varied ground conditions. Fuller describes what the crews bored in as “Anything and everything imaginable,” noting that the CDIA was essentially constructed in a creek bottom. Ground conditions for the project ran the gamut, including running sands, sandy loam, oozing clay, cohesive clay and saprolite. The rock that crews encountered consisted of high-strength blue granite in both highly fractured and competent states. Dealing with these different terrains made achieving line and grade even more of a challenge. 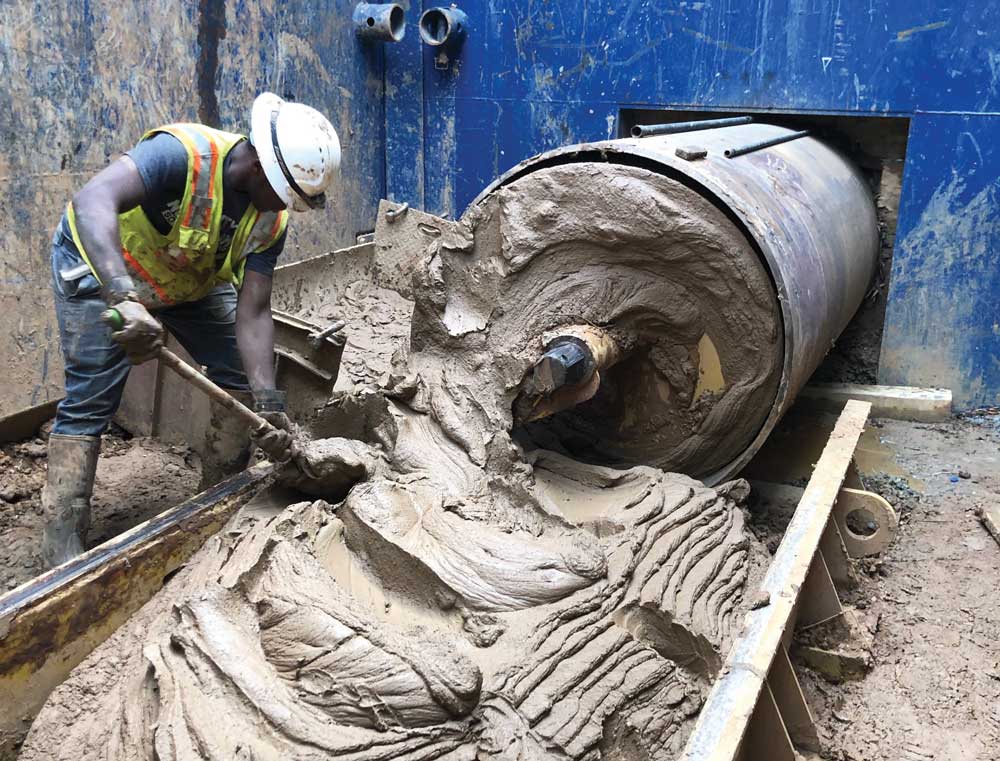 “This was not our first project where the bores were grade critical but it was our first end-to-end complete project where every segment of piping was grade critical,” Fuller says. “Once the first bore was in and the benchmark set, every subsequent bore had to follow suit with that bore. Because we were running two bores at once, each bore had to hit their mark with a tight tolerance or they wouldn’t match grade with the bore before or after that.”

Fuller attributes the success of the project to several factors, most notably the work of his team. “The project in general was management, labor and capital intensive,” he says. “[Our] success on the project can be directly attributed to the experience and skill of our employees.” He notes the work of Tim Bosley as boring superintendent, Wesley Carter as boring foreman and Chris Wells as mainline superintendent, who combined for 50-plus years of underground construction experience.

Bore #2: 62 ft completed as hand mined 48-in. liner plate tunnel with liner plates by DSI Underground Systems in partially weathered sandstone at a 0.40 percent uphill slope with no line or grade variance.

Bore #3: 36-in. x 0.500-in. thick casing installed 170 ft on a downhill 0.40 percent grade in a vertical split face of partially weathered sandstone and cohesive clay with heavy groundwater flow within the bore. Grade control in the split face was maintained by the use of shoes and intermittent hand mining for line and grade control. Grade held to within 0.25 ft and line held to 0.2 ft. This section was planned as open cut but was completed as an auger bore with zero traffic impacted during the installation.

Bore #4: 36-in. x 0.500-in. thick casing installed 332 ft on an uphill 0.40 percent grade in sandy uniform soils from the same launch pit as Bore #3 by use of a bi-directional pit layout. Bore was completed with less than 0.10 ft line and grade variance. This section was also planned to be open cut but was installed by auger boring with zero traffic impact in comparable schedule to open cut. The overlying soils in this area were found to be soft running clay which caused the opposing lane of traffic to settle 0.2 ft next to the pit but by using a single bi-directional launch pit between the entrance and exit to the FAA control tower, no impact to traffic or operations was noticed. The road was shored up for the duration of the bore. Settlement of the roadway in this area confirmed Fuller’s concerns over traffic impact if open cut installation was completed in this area based on soils data.

Bore #5: 36-in. x 0.500-in. thick casing installed 403 ft on an uphill 0.40 percent grade between two pilings of a retaining wall holding up the sole entry road for the terminal with 12 in. of clearance on either side of the casing to pass between the piles at 300 ft. Bore was completed with 0.20 ft line variance and 0.10 ft grade variance. The entire bore was completed in uniform sandy soils until the last 12 in., which broke into the side of an underground stream that had been rerouted during airport construction and filled with washed stone. Water then flowed through the casing at a depth of 3 in. throughout carrier installation. Bore was completed in under two weeks using conventional auger boring methods with near perfect tolerances.

Bore #6: 36-in. x 0.500-in. thick casing installed 106 ft on a downhill 0.60 percent grade in wet coarse sand and gumbo clay with a grade variance of 0.10 ft and no line variance. This section was to be open cut at 30.5 ft deep but was successfully auger bored at a lower cost and with no impact to the mostly glass Concourse A Expansion Structure 20 ft away.

Bore #7: 36-in. x 0.500-in. thick casing installed 411 ft on an uphill 0.60 percent grade in wet clay and sandy soils with heavy groundwater and intermittent boulders requiring hand mining. During one boulder clearing operation a boulder lodged under the casing and created a rising condition which was corrected with grade control fins. This section was planned to be partially bored with an 18-in. casing and partially open cut. Fuller upsized to 36 in. with an 8-in. carrier pipe due to the likelihood of boulders. Grade variance was held to 0.40 ft but the wedged boulder caused a hump in the casing. Upsizing the casing turned out to be a wise choice as the hump was addressed through the use of custom spacers and the variance was taken up in the annulus.