Published by TT Staff April 19, 2016 View Profile
Many of you have been there.

It’s your first large-diameter bore with your shiny, new maxi drill rig. Part of the way through your first reamer pass, you can’t seem to break out the drill pipe connections. After some careful deliberation — and some unspeakable prayers — out comes the rose bud. Presto, the connection is broken.

You tell yourself not to screw them together so tight next time, that should solve the problem. But next time around is worse. The rose bud is useless, the prayers get more unspeakable, and out comes the welders torch.
Is this a bad dream? Actually, it’s a nightmare.

Downtime, increased operating expenses and an unhappy customer are just the beginning. The connections you were actually able to get apart are now completely mangled, or better known as “galled.” (Picture at the top of the page) Now, you have almost an entire drill string that needs to be repaired. And even after they are repaired, those connections will never be the same again. The intense heat (initially from the rose bud, and later from the galling process) has permanently embrittled the threads. Repairing them will only hide the devil within. Clean and visually inspect your threads, or have this done by a third party inspector at regular intervals. This is a photo that shows a profile of brand new threads.

How Did This Happen?

This is where the bad dream turns into a nightmare. Vibrations from the bit (or reamer), combined with torque from the rig, will have a rotary sledgehammer effect on the threads. The threads will bang together while also trying to screw together. The shock load from this process will cause the threads to fail and eventually seize together through a process called cold welding. Even if any of the connections can be broken out, the threads will be galled, aka torn, mangled, boogered up, banged up, ripped, stripped. Call it what you want — the threads are effectively ruined.

The good news is that this nightmare can be avoided all together by simply getting the proper makeup torque on each and every connection. Your drill pipe supplier should have this information on hand. Or, in the event that you know the torsional yield of your threads, then the makeup torque is roughly half of that.

To be fair, another explanation for this nightmare could be over-torque (although more often it is only the scapegoat for our previous example). Over-torque is pretty straightforward. It occurs when the rig has more rotary torque than the connections you are using are designed to withstand. In this case, even though proper makeup torque was achieved, the drill pipe will still continue to torque up down hole. For example, a rig may have 70,000ft-lbs of rotary torque. But if you are running 5 ½-in. FH that has a little wear on the tool joints (under 7 ¼-in. OD), then the torsional yield on that connection is only 62,900 ft-lbs. Or worse yet, if some of your tool joints are worn down below 7-in. OD, then those joints will have a torsional yield of only 55,300 ft-lbs. In mild cases of over-torque, the results and damages will be very similar to that of insufficient makeup torque. But in severe cases, the drill pipe could actually break off at the threads. 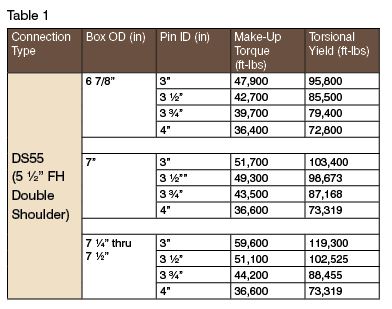 What about double shoulder connections? Aren’t they supposed to solve all these problems? Not necessarily. While it is true that the secondary torque shoulder gives them higher torsional strength than their single shoulder counterparts, that doesn’t mean they are invincible. They still have a minimum makeup torque that must be reached, and they still have a torsional yield that cannot be exceeded while drilling. If these same basic rules are not followed, then double shoulder connections will incur damages just the same as single shoulder.

A common trap that many contractors fall into is buying double shoulder connections when they don’t actually need them. Sure it’s great to have drill pipe with higher torsional strength, but if the rig doesn’t even have enough rotary to make them up properly, then trouble is around the corner. Most rig operators know the maximum rotary torque for their rig. But to avoid the nightmare, they need to pay attention to the torsional numbers for their drill pipe also. Another thing to remember is that those numbers will change throughout the life of the drill pipe (Table 1). 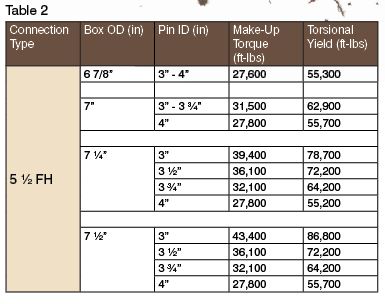 As the OD of the tool joints wear and become reduced, so will the makeup torque and torsional strength of the drill pipe. When shopping for drill pipe, contractors should always request torsional data from their drill pipe supplier — not only when buying but also at regular intervals as the drill pipe begins to wear.

There are plenty of other factors that could contribute to damaged threads. Although they are more obvious, they must not be overlooked. Here are some preventative maintenance tips to help mitigate those factors:

Keep connections clean and free of dirt, sand, and other grit- these things cause friction in the threads. Friction is the enemy.

Use copper based drill pipe dope — every connection, every joint, every time.

Clean and visually inspect your threads, or have this done by a third party inspector at regular intervals. The photo to the right shows a profile of brand new threads. Look at the tips of the threads and make sure they are nice and squared off. Pointed threads will begin to break and fail and cause galling. Not to mention, one damaged thread left unchecked could potentially damage every other thread it is made up with.

Change out or repair the saver sub on a regular basis. It sees the most action and therefore gets the most wear. If it is damaged, it will also damage all other threads it is made up with.