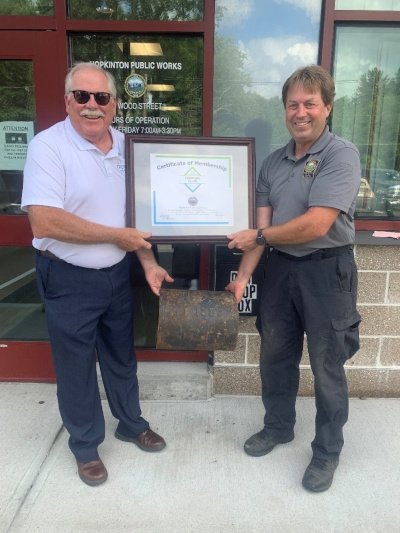 Paul Hanson, left, P.E., regional engineer for the Ductile Iron Pipe Research Association, presents Eric Carty, water and sewer superintendent for the Hopkinton, Massachusetts, Department of Public Works, with a plaque welcoming Hopkinton into the association’s Century Club due to a cast-iron pipe in its water system laid in 1877 that remains in use today.

The 8-in. pipe was installed in 1877 and remains in service today.

“Cast iron pipes have long served drinking water systems, providing clean water for generations because of their strength and durability,” said Patrick J. Hogan, president of DIPRA. “We’re excited to welcome Hopkinton into The Century Club. The city has long made smart choices for materials used in their drinking water system infrastructure, transitioning from cast-iron to ductile iron pipes, which will hold up to the passage of time so future generations can be assured their drinking water is clean and safe.”

Hopkinton Water and Sewer manager Eric Carty said the old main and the iron pipes in their system have given them “little to no issues over the years” while some younger pipes made from other materials have.

“The very old cast [iron] has lasted without issues,” Carty said. “The ductile has been great – easy to install [and] durable.”

Carty said his crews found a section of wood water mains during a sewer project but were unable to preserve it. Wood water mains have been found in other East Coast cities such as Philadelphia, showing the ingenuity and creative problem-solving of America’s early engineers.

Burying wood pipes underground would have protected them from inclement weather and horse-drawn carriages, a decision that local decision-makers would have been best positioned to make based on their knowledge and training. DIPRA commends Hopkinton’s officials for listening to professionals like Carty about what materials, including modern Ductile iron, are the best choices to meet the city’s current and future needs.