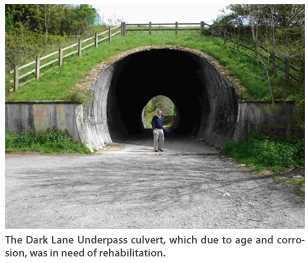 Insituform Technologies Ltd (ITL) was awarded the contract for a project involving the renovation of a large-dimension, ovoid-shaped culvert. This culvert, located beneath the A38 truck road near Chudliegh, Devon, United Kingdom, is known locally as the Dark Lane Underpass. The lining works were carried out by ITL on behalf of the Highways Agency’s main contractor and consulting engineering partner, EnterpriseMouchel.

The culvert comprises an open-ended structure measuring approximately 6,782 mm high, 6,122 mm wide and 48 m long. It forms a roadway maintaining access to a vehicle-turning area, as well as providing a connection to farm lands, which would otherwise have been bisected decades ago when the then new A38 trunk route was built. The original culvert support construction was of Armco corrugated steel plate. Through age, the action of weather and road drainage flows (which have regularly been salty due to road gritting/salting), the original lining steel started to deteriorate. So, as a preventative action and to ensure that any corrosion did not lead to a situation where the culvert could potentially become structurally unsound, the Highways Agency decided on a pro-active approach to reline the culvert completely. Any movement in the culvert would otherwise have had serious and potentially costly adverse effects on the main road running above.

While various options for the lining were investigated, the size and shape of the culvert led to the choice of a multi-plate corrugated steel liner option. In part, this was deemed most effective for maintaining the long-term structural integrity of the structure because it enabled the operational size of the culvert to be maintained for large vehicle access such as farm tractors and trailers. 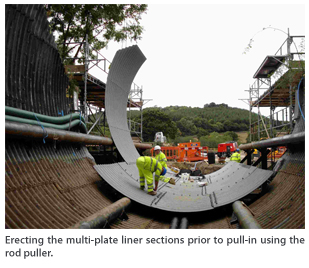 Having decided on the multi-plate option, it was decided to utilize an Asset MULTIPLATE corrugated steel liner for the work. One of the main obstacles for the operation was logistics. The MULTIPLATE liner was comprised of an invert section, a soffit (roof) section and two sidewall sections that needed to be bolted together onsite to create the necessary liner profile. The sections were delivered to the site by road. As the only area large enough to undertake the assembly work was a field adjacent to the culvert, all the required sections had to be delivered prior to commencing work as access to this assembly site would be cut off during the works with the closure of the culvert.

In order of operation, the works process included:

The assembly of the rail structure that was to be used for the installation of the lining sections was possibly one of the more difficult aspects of the pre-lining works. This was because its accuracy had to allow tight tolerances to ensure that the pre-erected liner sections would run smoothly into position during the final installation operation. It was also essential that the clearance between the liner and the original culvert remained constant so that the liner sections did not stick or snag against the inner culvert wall as they were moved.

For the liner installation, it was decided to erect three individual liner sections that were then bolted together prior to the final assembly of the culvert liner.

Onsite cranes transported liner sections to the erection site at the culvert mouth and scaffold structures allowed the workforce to connect individual sections together. This required increased and tightly controlled and monitored health and safety standards to avoid injuries from working at height and beneath slung equipment. 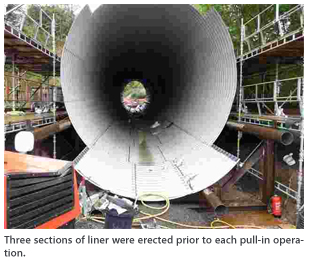 Commencing with the invert sections, the MULTIPLATE sections were pre-assembled in the construction compound and then craned from the compound onto the guide rails at the culvert mouth. Three sections at a time were then bolted together using low-vibration impact wrenches.

An interesting and unusual aspect of the project was the method used to pull the liner sections into place in the culvert once they were prepared. This was achieved by establishing a 50-t capacity Hammerhead Hydroburst HB5058 pipe bursting rod puller unit at the far end of the culvert, away from the assembly end. The rods from the unit were passed through the culvert and attached to the liner sections, which were sitting on the guide rails. Once attached, the prepared liner was then pulled into the culvert using the rod puller. A purpose-made frame, consisting of 315 universal columns, was placed against the existing wing walls of the culvert at ground level at the rod puller end of the project and anchored using 1-t sand bags. The universal columns were designed to distribute the load required to move the MULTIPLATE liner across the wing walls. 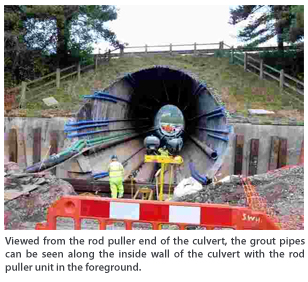 When a suitable number of complete rings were assembled, the structure was wrapped in a damp proof membrane for corrosion protection once in the culvert. With the membrane in place, the rod puller was then attached to the structure using an attachment beam, which was bolted to the MULTIPLATE’s existing fixings. Once attached, the structure was drawn into the existing culvert along the guide rails using the rod puller. The project progressed by erecting further liner sections and repeating the pull-in operations until the whole culvert length was lined.

To ensure both future structural integrity of the culvert as a whole and to fix the new lining in place within the culvert, upon completion of the liner erection and pull-in installation, the annulus between the new lining and the old inner wall of the culvert was filled with foam concrete using grout lines installed prior to liner construction. 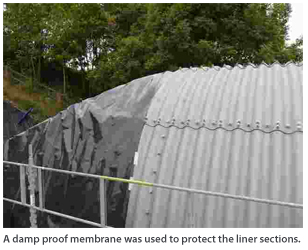 Despite the potential for problems due to access difficulties, working at height, scaffolding and rod pulling operations, no accidents occurred during the works. All signing and barriers throughout were erected in accordance with existing legislation and codes of practice. Security was available outside of working hours to protect the equipment and structures from unwanted public access. No incidents occurred during the occupation of the site.

As part of the safety procedures for the project, the access road to the culvert and a local footpath were closed for the duration of the works to ensure that the public did not stray onto the site or try to access the footpath through the culvert whilst equipment was erected or moving.

“On the face of it, this might at first seem to be just another culvert lining job. But, this one was different,” said Insituform Technologies Ltd. Business development manager John Beech. “The planning and effort that went into ensuring that logistical management ran smoothly, as well as the sheer size of the liner and management of the erection of the individual liner sections meant that our crew members had to call on all their expertise and skill to complete the works successfully and safely. All credit must go to the team for the high standards achieved in completion of the work.”

This article was submitted by Insituform Technologies Ltd.