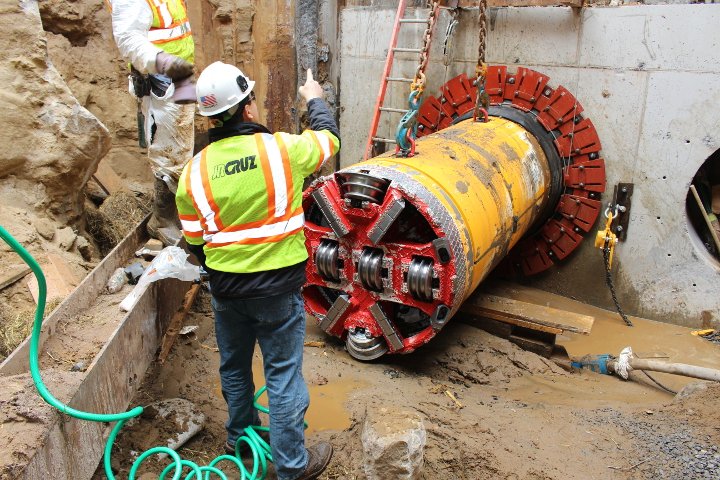 Located adjacent to JFK International Airport in Queens, N.Y., Bergen Basin has been recently listed as one of the most polluted waterways in the New York metropolitan area by Government Executive. One of the culprits is a bottleneck in a sewer conveying flows from South Ozone Park to the Jamaica Wastewater Treatment Plant. When the sewer is overwhelmed, untreated sewage flows directly into Bergen Basin leading into the Jamaica Bay.

In a project designed to reduce overflows, the New York City Department of Environmental Protection (NYCDEP) undertook the Bergen Basin Sewer Reconstruction project, which involved the construction of a new interceptor sewer under the Belt Parkway. The project, however, involved its share of challenges, including working in proximity to existing infrastructure while minimizing disruption for residents, businesses and commuters, particularly along the heavily traveled Belt Parkway. The groundwater table and flowing ground conditions added to the complexity of the job.

In the end, new technological approaches, innovative engineering solutions and good old-fashioned teamwork led to the successful completion of the project.

In its efforts to alleviate CSOs in its territory, NYCDEP planned the Bergen Basin project with lead consultant Hazen & Sawyer and underground facilities designer and geotechnical consultant Mott MacDonald. In 2015, construction began on the $20 million Bergen Basin Sewer Reconstruction project, which was awarded to JRCRUZ Corp. The project involved building a new interceptor that would serve to increase conveyance capacity, alleviate the bottleneck and therefore reduce sewer overflows.

The project had its share of challenges from the start. The project work area was located adjacent to the Belt Parkway, a heavily trafficked thoroughfare serving Brooklyn and Queens, with the new interceptor crossing underneath the roadway. In this urban environment, minimizing disruption was paramount, leading to the decision to use trenchless methods.

The ground conditions included artificial fill and glacial outwash below the groundwater table. Planners expected a relatively uniform condition of cohesionless soils with flowing conditions. The ground conditions in combination with the size of the pipe to be installed led to microtunneling being selected as the trenchless construction method.

The primary scope of work comprised two microtunneling drives and the construction of three access pits – one drive pit and two receiving pits. One drive paralleled the Belt Parkway, while the other crossed underneath. However, the Belt Parkway crossing had one additional complication – an existing 42-in. storm sewer crossed the planned microtunnel alignment. As a result of the conflict, designers developed a plan that would reroute the storm sewer, which would have required major disruption to the Belt Parkway. The portion of the storm sewer interfering with the new interceptor alignment would then be demolished to allow the tunnel to the pass, and then reconstructed and reconnected.

“It was very challenging tunneling under a major highway in close proxility to large utilities, including storm drains, water mains and a high-pressure gas main,” said Alex Papric, project superintendent for JRCRUZ. “In addition, we were working in sandy ground below the water table, so it was critical to maintain the integrity of the excavations to prevent any ground loss.”

When JRCRUZ Corp. was brought on board as the microtunneling contractor, it offered a Value Engineering Proposal (VEP) to deal with the conflicting 42-in. storm sewer. In looking closely at the alignment, JRCRUZ determined that by downsizing the 48-in. pipe crossing the Belt Parkway to 36 in., it could pass beneath the existing 42-in. storm sewer – with about 10 inches to spare. To provide sufficient conveyance capacity, JRCRUZ proposed using twin 36-in. crossings instead of a single 48-in. crossing.

The concept of using smaller pipelines had been discussed in the preliminary planning stage, but had not been pursued due to unknowns concerning the existing storm sewer – its exact elevation, whether it had been built with a cradle, and whether there were piles. The risks due to these unknowns resulted in the option being eliminated during the planning stage. Once the project was in construction, JRCRUZ was in a position to undertake more invasive investigations and confirm the viability of using twin 36-in. crossings.

JRCRUZ was granted access to the storm sewer and was able to perform test drills to confirm that the storm sewer was not built with a cradle that would impede the progress of the MTBM. Survey work was performed, including at the intersection points with the proposed microtunnel drives to confirm the elevations. Additionally, a crew drilled probe holes via horizontal directional drilling (HDD) along the proposed alignment of the additional crossing to check for the existence of obstacles. Two probes were drilled for each crossing – at the 2 o’clock and 8 o’clock positions of the tunnel cross section. These supplemented HDD bores performed during the design for the original crossing.

The successful completion of the probe holes and supplemental survey information gave NYCDEP and its consultants confidence to move forward with the VEP.

“The use of HDD probe holes turned out to be a useful site investigation tool,” said David Watson, project manager for Mott MacDonald. “I wouldn’t recommend it in every instance, but in this case, the consequences of the MTBM getting stuck beneath the Belt Parkway justified the investment in this additional investigation. Sinking an unplanned recovery shaft in the middle of the Belt Parkway would have been a major challenge and caused significant disruption to road users.”

Given the combination of low clearance, soft ground, short pipe lengths (4 ft), and the lack of a cradle, the decision was made to maintain a zone of grouted ground around the existing storm sewer to protect it in the event of settlement. Moretrench was brought on as the ground improvement contractor and used permeation grouting to form a block of treated ground around the storm sewer. Hydratite joint seals were installed inside of the sewer at the joints to prevent grout infiltration into the sewer. As an early warning to potential damage due to ground movement, a settlement monitoring program was set up along the microtunnel alignments.

“There was a very substantial settlement monitoring plan that included automated monitoring information that was available to all parties,” said Grahame Turnbull, of JRCRUZ. “It was set up to create instant notifications if settlement exceeded predetermined thresholds, but we were able to complete the drives without exceeding those thresholds.”

By using the contractor’s VEP, the owner was able to realize significant savings compared to the project’s originally estimated cost.

In dealing with the flowing ground conditions, JRCRUZ brought a new approach to the table by using innovative launch and reception shaft seals. These seals included a high-head, double-lip seal as opposed to a more traditional single-lip approach that can be susceptible to damage. The contractor’s approach also included using a cartridge-type system preinstalled into the double-lip seal within the shaft wall for the reception shafts. A more detailed description of this seal will be forthcoming in a future technical presentation.

“We were below the groundwater table in soils that would tend to flow, so we needed an approach to control water and soil during break in and break out,” Watson said. “In the design we called for a zone of grouted soil outside of the launch and reception areas in addition to seals, but the contractor proposed using these customized mechanical seals in lieu of grouting. It worked very well for all three drives.”

To successfully complete a project with a myriad of challenges requires innovative solutions and teamwork, according to Cruz. “We were able to complete the job successfully as a result of strong partnering between the owner and the designers,” he said. “It is not always an easy process, but by working together we were able to bring an approach to the table that helped to mitigate risk and bring cost savings to the owner. If you do not develop good relationships with the people you are working with even the best planned project can fail.”

Watson concurred. “The overall success of the project was about building relationships and working together to resolve problems as they arose. There were times when perhaps the parties did not perceive risk the same way, but we were able to resolve those issues and move the project forward.”

As a result of the project, the owner was able to save money from its original estimate and the Bergen Basin and Jamaica Bay will ultimately see benefits through improved water quality, all the while reducing impacts on residents and businesses during the construction process.