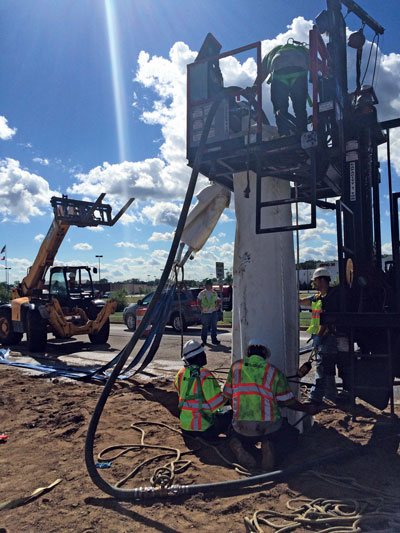 In late 2014, Lanzo Trenchless Technologies received a call from NTH Consulting and Drain Commission officials asking if there was interest to competitively bid on the latest contracts in a series of projects called the Oakland-Macomb Interceptor Drain (OMID). The tasks to be performed included deep interceptor pipeline and structure rehabilitation on problematic segments of sewer straddling Oakland and Macomb Counties in southeast Michigan. This 50-year-old concrete system ran adjacent to a crucial roadway (M 59) connecting the east and west sides of heavily populated suburban Metro Detroit.

There was concern as to competitive market interest on a project that would be mixing several different trenchless technologies in one or two construction packages valued in the $20 million range.

Engineers had identified that the system was succumbing to sulfide attack of reinforced concrete pipe and manholes that were installed during the late 1970s. As part of Segment 4 Repairs, it was deemed a priority to evaluate and repair more than seven miles of large diameter interceptor sewers some 40 ft beneath the active county thoroughfare to preempt any “catastrophic” failures.

Sealed proposals were reviewed by a board overseen by Oakland County Water Commissioner Jim Nash, Macomb County Public Works Commissioner Anthony V Marrocco, and State of Michigan Department of Agriculture and Rural Development’s Michael Gregg. Under an MDEQ permit using State “SAW” Loan and EPA funded money; the board solicited to contract work in both the Oakland Arm (PCI-9 / PCI 10), as well as the Avon Arm (PCI 11) Interceptors. NTH served as lead consultant while a local engineering firm, FKE was similarly retained with intimate knowledge of the system, prevailing defects and the pipeline’s potential for trenchless rehabilitation.

Pre-qualified contractors were required to “self-perform” much of the construction trade work by dollar volume. This provision added quality to the specification, minimized risk and insured that the general contractor selected would perform the work as specified while providing first quality materials and workmanship.

Contractors performing the lining work had to demonstrate a proven record of performance in pipeline rehabilitation with minimum lineal footage and minimum successful years of experience for each of applications specified. Additionally, like conditions and necessary skill set for projects of this scale were considered.

Having experience in all of the proposed technologies, Lanzo tendered bids on both projects and was selected with an overall price of under $16 million. Additionally, Lanzo offered a five-year warranty on all materials and workmanship associated with the contracts.

Work was difficult and dangerous, requiring the utmost care in safety consideration, monitoring and management. The initial phase of the contract included constructing permanent gravel roads for access and to insure constructability of the project.

The grout-in-place liners was comprised of a Permacast product, which was selected for its corrosion resistance and structural properties. The Permacast pipelining material product was specially designed for dry shot application and is fully compatible with Conshield, which was specified to prevent Microbially Induced Corrosion (MIC) while resisting the attack of sewer gases. As part of the Segment 4 repairs, a suite of trenchless methods were used, including CIPP, cementitious Centripipe and grout-in-place liners.

The Permacast material also contained a Crystal X additive which creates a crystalline waterproofing membrane to auto heal any cracks which might develop. This material may be put on in multiple lifts without cold joints.

For the chemical portion, a premixed liquid acrylamide grout was formulated and shipped by Avanti International for ease of application and to facilitate a high rate of installation.

One of the early tasks was to tunnel a 16-ft diameter shaft down to the 96-in. diameter sewer crown, create access and build a platform for staging of both the chemical and cementitious grouting activities within the pipeline.

Challenges included working in and around flow that could not be disrupted during the construction process. Much of the work was conducted above existing flow lines by holding cementitious delivery hoses at elevations above the hydraulic grade line. A cabled Hammerhead Winch System was erected to pull construction carts between access points as far as 1,200 ft apart. Specially fabricated platforms and this mobile carriage delivery system insured the transport of materials to respective rehabilitation sites within the pipeline.

As part of the inspection process, any reinforcing steel that was identified as suspect was slated to be replaced as directed by the engineer.

The owner’s objective was to perform as many repairs possible given this unique opportunity to have total access to this critical trunk sewer interceptor during the project.

“The cost to bypass, access and enter these sewers is high. It’s in everyone’s best interest to make hay while the sun is shining,” said D’Alessandro. An opportunity was identified given a window of time to provide expanded services, while already under bypass, in order to minimize future risk while conserving cost moving forward.

Anticipation of repairs as specified, while thorough, did not cover every inch of pipeline. The cost to return vs. the cost of making additional repairs while in the pipeline was considered. Engineers discussed the ability to anticipate areas which would be the next in line to undergo attack. Work in additional “areas of concern” was then added and performed concurrent with the specified schedule of services.

It was decided to perform additional CIPP lining which would offer a “one and done” approach to select line segments. This would effectively take these lines out of any future consideration for maintenance or ongoing evaluation. Given a CIPP service life expectation of at least 50 years, the cost of evaluating the sewers every eight years or so affords diminished returns when major flow control management (bypass), maintenance of traffic and social cost of disruption is considered.

On a grand scale, the OMID projects represented an overall $160 million effort by the board which has been under construction since about 2009. Segment 4 activities are ongoing with an anticipated completion date of spring 2016.