The bottling plant services the entire Phoenix metropolitan area, which has a population of more than 4 million people. To maximize production and meet market demand, the plant operates 24 hours per day, seven days each week. Every step of the process occurs in this one location, with the production of syrup, water mixture, and packaging all happening onsite. The complex infrastructure, comprised of a web of drain lines and primary outfall drain pipes, creates a highly complicated grid of intersecting pipe.

Hoffman Southwest Corp.’s Roto-Rooter Division has worked with the soft drink manufacturer for the past 10 years to provide ongoing cleaning and maintenance of their production facilities. Maintenance of the customer’s process water discharge drain system is often the focus of these services, as well as traditional sewer system inspection and repair.

As part of its regular inspection services, Roto-Rooter identified a pipe that failed, and as a preemptive measure the customer asked Roto-Rooter to inspect all of the pipes in the system. The result was a need to rehabilitate or replace the pipes immediately, because the potential for major system failure if the complex infrastructure were to be compromised would have far-reaching effects. Not only would failure of this scope have a huge impact on production, but the additional impact on employees losing hours of work, inventory reduction and other concerns could prove disastrous. 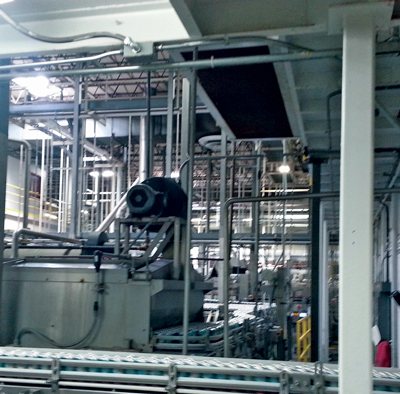 During this rehabilitation process, Roto-Rooter and Pro-Pipe worked a section at a time to minimize disruption, working 24 hours per day.

Since 2001, the customer has worked with The Project Group LLC (TPG), a company that meets the diverse and challenging needs of food and fluid bottling clients. TPG evaluated the situation, and considered a variety of solutions to rehabilitate and/or repair the drain piping system. TPG recommended the best solution for the customer: to rehabilitate versus replace. The alternative using replacement technologies — would result in the plant shutting down indefinitely to address the issues. Hoffman Southwest Corp. was retained to provide these services through its Roto-Rooter and Professional Pipe Services (Pro-Pipe) divisions. Pro-Pipe, a company that provides assessment, cleaning and rehabilitation of pipelines, was hired to address the larger lines which were part of this complex project.

The network of drains in the massive bottling plant includes 14 pipe segments ranging from 4-in. laterals to 12-in. diameter outfall lines, totaling more than 3,800 lf, all of which are active 24/7. The rehabilitation process had to be performed during production, under a complex array of robotic bottling equipment. The systems originate from various equipment rooms and run throughout the plant, criss-crossing and creating a grid formation throughout.
Roto-Rooter utilized cured-in-place pipe (CIPP) technology using the MaxLiner system, incorporating a combination of UV Cure and traditional CIPP. The MaxLiner system is lightweight enough to maneuver tight spaces and was easily transported from one location to the next. In addition to minimizing disruption, CIPP solutions also provided a green alternative by incorporating the use of styrene-free epoxy resins.

Being a consumable product, all precautions had to be taken very seriously to prevent compromise. Containment was key to prevent concrete dust and other contaminants from getting into the air during jack hammering of holes and other activities. Roto-Rooter incorporated plastic “tents,” which utilized an exhaust fan with two HEPA filters on the side. One extremely dusty location required an exhaust vent that reached the 30-ft high roof. Roto-Rooter technicians worked continually, pausing work only long enough for the customer to check for material in the air.
Minimizing disruption to the customer’s operation, maintaining regular production and protecting profitability were accomplished, in part, by Roto-Rooter’s ability to work around the company’s day-to-day operations. Equally important was Roto-Rooter’s willingness to adjust to and accommodate physically challenging situations. There was minimum space available for the technicians to move around, preventing them from standing upright, in many cases, as they completed the work.

Closing down the 24/7 production for even a few hours can mean major impact on employees, product availability to the community and, of course, the bottom line. During this rehabilitation process, Roto-Rooter and Pro-Pipe worked a section at a time to minimize disruption, working 24 hours per day, constantly vigilant to stay clear of the production process, which included mechanical forklifts and other critical components. Completed in the summer 2014, the entire network was renewed and the customer did not lose even an hour of production time.